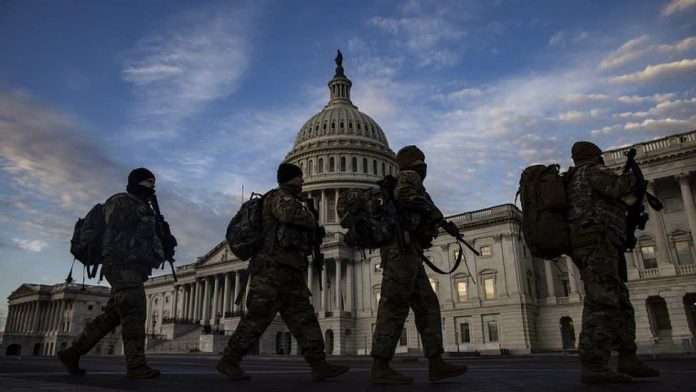 US security chiefs have warned of a heightened threat of domestic terrorism from people unhappy with the outcome of the November election.

The Department of Homeland Security said the 6 January attack on the US Capitol by Trump supporters may have emboldened some extremists.

In an advisory it warned of a threat from “individuals frustrated with the exercise of governmental authority”.

But it added that there was no information on a specific plot.

The attack on the US Capitol building came as Congress was meeting to confirm Joe Biden’s election victory. Outgoing President Donald Trump had earlier addressed thousands of his supporters outside the White House and repeated unfounded claims that the election had been stolen from him.

He told them: “If you don’t fight like hell you’re not going to have a country any more.”

A crowd then made its way to the Capitol, overwhelming security and storming the building. Five people, including a Capitol Police officer, died in the riot.

Mr Trump has now been impeached by the House of Representatives for incitement and his trial in the Senate is due to start next month.

The advisory issued on Wednesday said that the department believed a heightened threat would persist in “the weeks following the successful presidential inauguration”.

“Information suggests that some ideologically-motivated violent extremists with objections to the exercise of governmental authority and the presidential transition, as well as other perceived grievances fuelled by false narratives, could continue to mobilise to incite or commit violence,” it said.

The advisory added that some “domestic violent extremists… may be emboldened” by the breach of the Capitol building “to target elected officials and government facilities”.

It is the first such public alert that the department has issued in about a year.

The attack on the Capitol sent shockwaves around the country and US authorities moved quickly to identify and arrest those responsible.

Prosecutors say they have so far identified 400 suspects and arrested 135 in connection with the violence.

As the government warns Americans to stay vigilant against potential attacks from “homegrown violent extremists” who may feel emboldened by the 6 January riot, many in the country consider the people who stormed the US Capitol to be “patriots” who should be celebrated.

On the social media site Telegram, where many right-wing groups moved after being banned by Twitter and Facebook, the Capitol raiders are lauded as freedom fighters and heroes.

The chat streams are full of conspiracies, QAnon plots, anti-Semitism and support for Donald Trump.

It’s not clear who is real and who might be a troll or a bot on the site – some of the posts are so hateful and offensive. And many deny basic facts of history or present-day events and promote violence.

Many posts are from true believers of Donald Trump who say he should still be the US president.

Why in-person workers may be more likely to get promoted