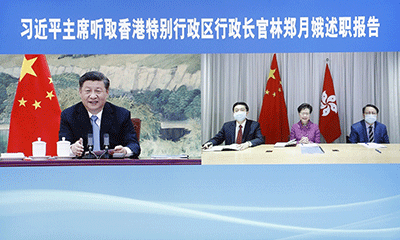 In a rare move, the Hong Kong Special Administrative Region (HKSAR) government chief Carrie Lam reported her work to Chinese President Xi Jinping via a videoconference on Wednesday – the first time since the city returned to the motherland in 1997, given the severe COVID-19 outbreak in Hong Kong.

It was the first duty report from the Hong Kong leader made to the central government after the highly anticipated national security law for Hong Kong took effect in June 2020, which has been playing a vital role in helping restore the social order following months of riots triggered by the anti-extradition movement in 2019.

Chinese experts on Hong Kong affairs saw this virtual meeting as a clear sign that the Hong Kong government has become politically mature over the past year, especially in the face of the US’ crackdown over the national security law for Hong Kong. It also indicates the future path of political reforms, which would help it carry on the unique “one country, two systems” more effectively and accurately by setting the bottom-line that the city must be governed by patriots.

The report was also delayed for about a month as the chief executives from Hong Kong and Macao SARs usually come to Beijing to report their work every December – a political routine since the two cities returned to the motherland in 1997 and 1999. However, the epidemic situation in Hong Kong remains severe after reporting 60 new confirmed COVID-19 cases on Wednesday, bringing the total number of infections to over 10,000.

Xi also heard a work report by the Macao Special Administrative Region’s Chief Executive Ho Iat Seng on Wednesday via video link, and praised Macao’s efforts to contain the virus that have resulted in zero local cases for over 300 consecutive days.

The Chinese President told Lam that “on major issues such as national security, you have taken a firm stand and assumed responsibilities, demonstrating your love and deep sense of responsibility to the motherland and Hong Kong,” according to the Xinhua News Agency.

“The central authorities fully acknowledge your performance and the performance of the HKSAR government in fulfilling duties,” Xi said.

The Chinese top leader also said Hong Kong must be governed by patriots, a basic principle that is related to the country’s sovereignty, security and development interest as well as the city’s long-term prosperity and stability.

Xi also asked Lam to convey his sympathy to HKSAR officials unreasonably sanctioned by the US, which shows that the central government recognizes the firm political stand and performance of Hong Kong officials.

That remarks send a strong signal that the central government will unwaveringly support those who stand with the country in protecting national sovereignty, security and development interest to deal with the US sanctions, said Tian Feilong, an associate professor at Beihang University in Beijing and member of the Beijing-based Chinese Association of Hong Kong and Macao Studies.

Acknowledging Lam and other HKSAR officials’ work shows that the central government regards the HK government as being much more politically mature amid anti-government turmoil and US-led sanctions, Tian told the Global Times on Wednesday, adding that more efforts should be made to accelerate reforms on local governance.

At least 11 local officials of Hong Kong have been put on the sanctions list of the Trump administration in 2020 as Washington’s response to the national security law for Hong Kong. The sanction list includes Lam, Commissioner of Hong Kong Police Force (HKFP) Chris Tang, John Lee, Secretary for Security and Teresa Cheng, Secretary for Justice. The US government also sanctioned six more individuals in January including Tam Yiu-chung, Hong Kong delegate to the National People’s Congress Standing Committee, and two officials from the HKPF national security division.

“Xi’s remarks set the fundamental tone for Hong Kong affairs, and praising Lam’s work could dispel various unnecessary doubts and discord over the HKSAR government’s work… allowing the HKSAR government to improve confidence and sustain morale for carrying on future work,” Lawrence Tang Fei, a member of the Chinese Association of Hong Kong and Macao Studies, told the Global Times on Wednesday.

Ahead of reporting the work to Xi, Lam released a summary of Hong Kong’s anti-epidemic work in 2020, claiming that compared to the Chinese mainland and Macao, the city has been left behind in terms of epidemic control, but the city did much better at the international level. There were major lessons drawn from the work such as the lack of understanding of the virus, lack of supplies and continuing social turmoil and politicization of the epidemic, which had made the work more challenging.

While the city – a highly open international hub – is currently experiencing the fourth outbreak, the HKSAR government recently imposed a neighborhood lockdown for mandatory testing, which was also the first time the authority undertook such stringent measures. Lam also disclosed that the government has asked for help from the central government in distributing the vaccine developed by Sinopharm.

In addition to the public health crisis, Hong Kong has also been grappling with a serious impact from the epidemic, with unemployment rate reaching a 16-year high of 6.6 percent in the last quarter of 2020. However, the implementation of the national security law for Hong Kong had been showing strong deterrence in ending riots instigated by secessionists and extreme anti-government forces.

Still, the most pressing task for the HKSAR government to quickly stem the spread of the COVID-19 also directly relates to economy and livelihood in the city.

The city recently reversed a recession in the third quarter of 2020 with a 2.8 percent quarter-to-quarter growth, thanks to early success in containing the virus, a remarkable recovery on the Chinese mainland, and improved business conditions due to the National Security Law that has effectively restored social and political order in the city. The Hong Kong General Chamber of Commerce also forecast in December that the Hong Kong economy could grow 3.5 percent in 2021.

However, the recent resurgence of the COVID-19 dented the economy’s prospects for recovery, as unemployment remained at a 16-year high of 6.6 percent in the fourth quarter and retail sales are expected to contract 30 percent in the first half of 2021 from the 2019 level.

“It is very likely that there will be an overall growth in 2021. However, the current situation is still very severe,” HKSAR Financial Secretary Paul Chan Mo-po said on January 17. He noted that the development of the pandemic would be the “most critical uncertainty.”

Given such an uncertainty, the most effective way for the central government to help the HKSAR economy to cope with the impact of COVID-19 would be supporting and assisting the city’s efforts to combat the outbreak of the virus and resume travel between the mainland and the city, analysts noted.

“The central government could provide vaccines to Hong Kong and reopen ports  between the mainland and Hong Kong,” Liang Haiming, chairman of the China Silk Road iValley Research Institute and an economist from Hong Kong, told the Global Times on Wednesday. “That would be the biggest help to the special administrative region’s economy.”

Defying earlier concerns of foreign investors fleeing the city raised by certain foreign media outlets in the wake of the National Security Law, many foreign companies have remained in the city and many plan to increase investments.

A recent survey conducted by the American Chamber of Commerce in Hong Kong showed that most member companies said they still choose Hong Kong as their regional headquarters in the next three years, and nearly 60 percent have or are planning to have business operations in the Greater Bay Area.

During the meeting, Xi stressed that Hong Kong should be governed by patriots, which also reflects the future path of political reform in the city under the “one country, two systems,” according to Chinese experts.

As Xi emphasized that only when the city is ruled by patriots can the full capability of the central government over Hong Kong be carried out and implemented effectively, Tian agreed on this bottom line, suggesting that “further improvement in terms of system reform should be based on this line, and future reforms be made on various aspects, including legislature and education reform with enhanced understanding of the Constitution and the Basic Law, in addition to further recognition of Chinese politics and legislature,” he said.

Also, accelerating the reform in Hong Kong electoral system while fixing some loopholes in local governance is also highly anticipated, the expert added.

Hong Kong’s 180,000 civil servants were told recently that they had four weeks to sign a document pledging their loyalty to the Basic Law and the “one country, two systems,” and the HKSAR government is scheduled to submit a draft to the Legislative Council after Spring Festival in enhancing regulations and pledging loyalty.

Policy advisors and experts on Hong Kong affairs said that Hong Kong electoral reform is inevitable, with some suggesting setting up a political scrutiny mechanism to make sure ‘those who rule Hong Kong are patriotic.’

Lau Siu-kai, vice-president of the Chinese Association of Hong Kong and Macao Studies, was quoted as saying in a recent media report that the electoral system in Hong Kong will see “major changes” in order to carry on the principle of “patriots govern the city, secessionists and rioters expelled from the election.”

Hong Kong undertaking a major change from chaos to stability also underscored a deep principle, as Xi reiterated that those who rule the city are patriotic is also related to China’s sovereignty, safety and interests of development, which “is a fundamental principle of its long-term prosperity and stability,” the top leader said.

What happened to facts and science? Western propaganda about ‘vaccine disinformation’ is just another Russiagate