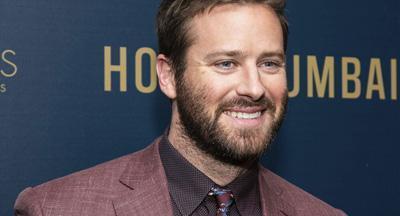 The star of The Man From U.N.C.L.E., Free Fire and the Social Network has not yet commented on statements made by the two women he reportedly dated after he broke up with his wife, Elizabeth Chambers. However, he has been dropped from another project The Offer, a drama series where he was set to portray movie producer.

Armie Hammer’s ex-wife Elizabeth Chambers has broken her silence over the cannibalism and abuse allegations made against her husband. The 38-year-old wrote a short comment on an Instagram post put up by the Just Jared entertainment news portal which announced a new movie that will be directed by Luca Guadagnino and feature Timothee Chalamet, both of whom worked with Hammer on the film, Call Me by Your Name.

The report said that Hammer will be reuniting with the pair for a film which will be a mix of horror and love about… cannibalism.

“The project is based on the novel Bones & All by Camille DeAngelis, which follows Maren Yearly on a cross-country trip as she searches for the father she’s never met in an attempt to understand why she has the urge to kill and eat the people that love her,” the Hollywood Reporter wrote.

Commenting on the post about movie, Chambers simply wrote: “No. Words.”

Previously people close to Chambers who spoke with media said the woman was in “shock” and “had not processed” the allegations made against the actor.

Screenshots of Messages and Statements from Ex-Girlfriends

At the beginning of January an Instagram user @HouseofEffie shared screenshots of messages, which allegedly had been sent by Hammer.

One of the read:

“Would you come and be my property till you die? If I wanted to cut off one of your toes and keep it with me in my pocket so I always had a piece of you in my possession?”

The actor was scornful when asked about these messages allegedly sent by him, but dropped out of a forthcoming movie with Jennifer Lopez.

“I’m not responding to these bullshit claims – but in light of the vicious and spurious online attacks against me, I cannot in good conscience now leave my children for four months to shoot a film in the Dominican Republic. Lionsgate is supporting me in this and I’m grateful to them for that,” the actor said in a statement.

After that, two young women came forward saying that Hammer wanted to “eat” their ribs and accused the actor of manipulating them into engaging in master-slave fetishes.

The actor did not respond to these allegations but has again dropped out of another project.

“Thirteen years as best friends, soulmates, partners and then parents. It has been an incredible journey, but together, we’ve decided to turn the page and move on from our marriage.”