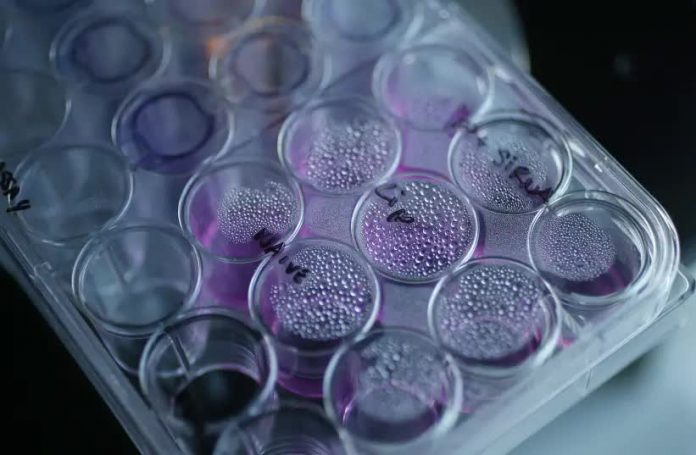 Breakthrough study unveils vulnerability of malignant cells with high degree of chromosomal instability and could lead to new treatments.

A tray containing cancer cells sits on an optical microscope in the Nanomedicine Lab at UCL’s School of Pharmacy in London May 2, 2013.
(photo credit: REUTERS/SUZANNE PLUNKETT)
A team of researchers led by scientists at Tel Aviv University say they may have stumbled upon the “Achilles’ heel” of cancer cells, which could in the future lead to the development of an entirely new array of cancer drugs and treatments.
For more stories from The Media Line go to themedialine.org

Dr. Uri Ben-David of the Sackler Faculty of Medicine at Tel Aviv University, who led the research, told The Media Line that scientists have known for well over a century that malignant cells have an abnormal number of chromosomes. Humans have 46 chromosomes (two sets of 23) but in cancer this number changes because, during cell division, chromosome segregation takes place that can lead to a phenomenon called aneuploidy.

Aneuploidy, the presence of an abnormal number of chromosomes in a cell, not only causes common genetic disorders but is also a hallmark of cancer cells. Not all cancers exhibit aneuploidy, but roughly 90% of solid tumors and 75% of blood cancers do, to a certain degree.

According to Ben-David, the findings open up an entirely new avenue for medical research.

“For decades, we’ve been trying to understand why [aneuploidy] happens in cancer and how it contributes to tumor formation and progression,” Ben-David said. More importantly, he said, scientists have been trying to see “if we can take advantage of this quite unique difference between cancer cells and normal cells in order to selectively kill the cancer cells.”

The study, which was published in the scientific journal Nature and whose findings were released Wednesday, was conducted in Ben-David’s laboratory at Tel Aviv University in collaboration with six laboratories in four other countries – the United States, Germany, the Netherlands and Italy.

“The overall vision here is that by understanding how aneuploid cells are different from normal cells, and detecting the Achilles’ heel of aneuploid cells, this could be a very attractive way to selectively kill cancer cells,” Ben-David said.

In the study, researchers took about 1,000 cancer cell cultures from patients and looked at them in a lab using advanced bioinformatic methods in order to quantify their degree of aneuploidy, from most aneuploidy to least aneuploidy. After the cancer cells’ degree of chromosomal instability was ascertained, the scientists then examined and compared their sensitivity to thousands of drugs.

Scientists found that aneuploid cancer cells were highly sensitive to the perturbation of the mitotic checkpoint — a so-called cellular mechanism which ensures proper separation of chromosomes during cell division.

“That enabled us to identify unique vulnerabilities of the aneuploid cells that we went on and characterized in depth at the molecular and cellular level,” Ben-David said. “We found that if you inhibit the proteins of these pathways, the aneuploid cells are more sensitive to this interference than normal cells … therefore, they make for attractive targets for drug discovery and drug development.”

The research has important implications for future cancer treatments and personalized medicine. At the moment, several drugs that inhibit or delay the separation of chromosomes are in clinical trials but researchers have been unable to identify which patients would respond to them or not. Ben-David’s study suggests that aneuploidy could help scientists determine an individual’s response to these drugs.

Furthermore, honing in on these chromosomal abnormalities also could lead to the development of more effective cancer treatments in the future, since doctors could test for aneuploidy and craft a treatment accordingly.

Dr. Yael Cohen-Sharir, of Tel Aviv University’s Department of Human Molecular Genetics and Biochemistry, is the lead author of the study. Cohen-Sharir, who manages Ben-David’s lab, called the research groundbreaking.

“Aneuploidy is very, very difficult to study,” she told The Media Line. “It affects so many genes at once.”

Cohen-Sharir emphasized that the current study was carried out on cells in culture and not on actual tumors, and that further follow-up research needs to be done. The next step for researchers, she said, is to attempt to replicate the findings on mice.

As for Ben-David, he is optimistic that harnessing the unique characteristics of aneuploidy could eventually lead to the Holy Grail of cancer research: finding a way to kill malignant cells without harming healthy cells in the body.

“Killing cancer cells is very easy: You can pour bleach on them and they will die, but the hard part is to do it without killing normal cells,” he said.

Ben-David says that, as far as he knows, this is the first time that aneuploidy was systematically evaluated in human cancer cells. “This is why it’s a major breakthrough,” he said.