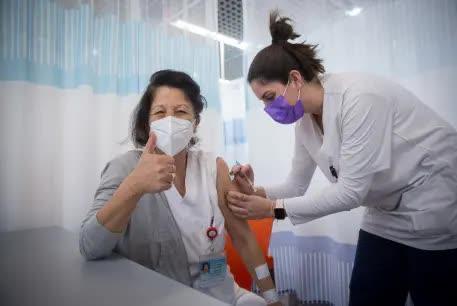 Sheba Medical staff members receive the second round of the COVID-19 vaccine, at the Sheba Medical Center, Tel Hashomer, January 10, 2021
(photo credit: MIRIAM ALSTER/FLASH90)
A total of 371 out of 715,425 Israelis who passed at least a week after receiving two doses of the Pfizer coronavirus vaccine have contracted the virus – 0.04%, with 16 being sent to the hospital – according to a Health Ministry report released on Thursday.
Immunity to COVID-19 is supposed to kick in a week after receiving the second dose of the Pfizer vaccine.
According to the studies conducted by Pfizer, the vaccine had an efficacy of about 95%, which is considered very high. The Israeli data appear to confirm the inoculation’s effectiveness, showing an even more promising result.
Later in the day, Maccabi Healthcare Services – one of the country’s four health maintenance organizations – released the first results of the vaccination campaign of its members, with the organization also comparing the data to a control group that did not get inoculated.
Some 248,000 Maccabi members were already a week after the second shot as of Thursday. Of those, just 66 got infected with the virus, the majority of them over the age of 55 and about half of them with preexisting conditions. All those infected experienced only a mild form of the disease, and none were hospitalized.
Over the same period of time, some 8,250 new cases of COVID-19 emerged in the control group of some 900,000 people having a diverse health profile. Those who were not inoculated were therefore 11 times more likely to get the disease than those who were immunized, showing 92% effectiveness.
“The fact that seven to 18 days after receiving the second dose the vaccine shows a 92% efficacy is very encouraging data,” according to Dr. Anat Aka Zohar, head of Maccabi’s Information and Digital Health Division. “We will continue to monitor the situation to see if the number increases and reaches the 95% demonstrated during the Pfizer study.”
Israel has established itself as a vaccination powerhouse. So far, more three million people have received their first dose of the Pfizer vaccine – including 82% of people over 60 – and 1.5 million have been given both shots.
Beginning Thursday, Israel started vaccinating people as young as 35 at a pace of 200,000 shots per day.