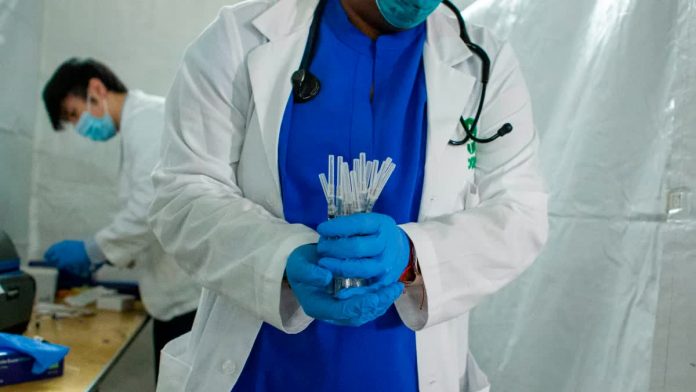 As part of its COVID-19 vaccination efforts, the state of Virginia last week assembled a 12-person crack squad to a banal but vital task: data entry. Workers at many of the state’s vaccination sites, especially those in remote areas with limited internet connectivity, have been failing to input information about the people getting inoculated into the state’s database. The new team’s job is to help fix the problem, which has left gaps in state health officials’ understanding of who has been getting the shot—and who has not. “We’ve got to fix the data quality, data accuracy issue,” says Dr. Danny Avula, the director of Virginia’s vaccination effort.

Such problems aren’t limited to Virginia. Nationwide, the U.S. vaccination rollout has been plagued by data gaps, which threaten to make it harder to hold leaders accountable for their goals, obfuscate if and when we reach the long-sought goal of herd immunity, and erode public confidence in the entire vaccination process. “The public has the right to know, ‘are we doing a good job or not?’” says Avula. “The more people know, the less they will make up, and therefore the less fear and anxiety will be disbursed in the community.” Moreover, the lack of adequate vaccination data could undermine efforts to ensure racial and ethnic equity in the process, further exacerbating pandemic-driven disparities.

While some states are doing better than others, many are still not publishing key information like demographic breakdowns of who has been vaccinated and where those vaccinations occurred. Iowa and Minnesota, for instance, don’t include racial breakdowns in their published vaccination data, while Missouri and Connecticut are among the states that don’t publish real-time vaccination information at all. A representative from the Iowa Department of Public Health says the state is “working on a more robust reporting mechanism and hopes to have that online this week.” Connecticut tracks vaccination information and adjusts shipments of shots based on that data. The Minnesota and Missouri health departments did not respond to requests for comment. But, says Dr. Howard K. Koh, a professor of public health leadership at Harvard who served as Assistant Secretary for Health during the Obama Administration, “we don’t have a timely, coordinated national public health data infrastructure to track how the vaccination is proceeding.”

Looking back just a few months demonstrates the perils these data gaps present. When mass COVID-19 testing first got underway in the U.S. last spring, many states were slow to break out results by race and ethnicity, masking the disproportionate toll the pandemic was taking—and continues to take—on Black, brown and other disadvantaged communities. “The consequences then and now I think are the same in terms of flying blind,” says Emily Zylla, a senior research fellow at the University of Minnesota’s State Health Access Data Assistance Center. “We are counting on this vaccine to get us out of the pandemic, and we’re going to be left with populations where they will continue to be exposed and bearing the brunt of this if we don’t get the vaccines to those high-risk areas.”

Troubling demographic gaps are already apparent in some states that are publishing decent data. Virginia’s COVID-19 dashboard, for instance, appears to show large disparities in vaccine distribution among racial groups—but the data are incomplete; there are no race or ethnicity numbers for more than half of the 600,000 doses Virginia has administered as of Jan. 28. Pennsylvania and Florida are missing race or ethnicity data for around 200,000 of their 630,000 and 1,490,000 people vaccinated, respectively. In Delaware, there’s no race or ethnicity information tied to about a third of the administered vaccine doses overall, equalling more than 26,000 shots.

Having a better sense of who’s being vaccinated and who isn’t is vital for state health officials, who need as much information as possible to decide where to send the limited amount of doses they’re receiving from the federal government. More and better data can also reveal other obstacles that can disrupt an equitable rollout. Undocumented immigrants, for instance, have faced increased risks over the course of the pandemic, occupy a large share of essential jobs and are likely to face additional hurdles in getting vaccinated, like language barriers. “Is a mass vaccination effort where you have a lot of law enforcement controlling traffic, is that going to be a detractor for our undocumented community? The answer is probably yes,” Avula says. “It’s things like that where we’ve got to adjust our approach and be really thoughtful about the lived experience of our marginalized communities.”

Any single vaccination is good news at this point, but if we miss certain groups, it will take us longer to reach mass herd immunity—or the point at which enough people are inoculated that viral spread is seriously curtailed. “If we have communities that are left out of vaccine campaigns, or are vaccinated at low levels, the virus can still circulate in those communities,” writes Brooke Nichols, a health economist and infectious disease mathematical modeler at Boston University, over email. “If vaccine coverage is very uneven (or highly concentrated in some neighborhoods, and sparse in others), then it would take a greater number of vaccines to reach true herd immunity.” Nichols adds that vaccination data could also help leaders make better decisions about when to reopen certain facilities, like schools. “I’m worried that the data as it exists now cannot answer those questions for us,” she says.

Resources appear to be the primary challenge for states attempting to collect and publish better vaccination data. Setting up such systems is a money- and labor-intensive process, no easy thing for public health departments facing inadequate funding and staffing while simultaneously fighting a once-in-a-generation pandemic. Privacy issues are cropping up, too, as some vaccine recipients are uncomfortable sharing their race or ethnicity, an aversion that is often justified in light of histories of discrimination.

New problems can unexpectedly arise along the way as well—in Virginia, for example, 58,000 healthcare employee vaccination records were recently logged into the wrong platform, preventing them from showing up on the state’s dashboard; the state’s software engineers are working on a fix.

One potential answer to this data crisis: more help from the federal government. While the Trump Administration was notorious for ignoring or obfuscating key pandemic data, President Joe Biden is taking a different approach. On his first full day in office, Biden issued an executive order that aims to improve federal collection and sharing of disease data, signaling his team will base more of its efforts on the numbers.

But Biden’s plans will take time to implement. In the meanwhile, states can’t simply hit pause on their rollouts while they figure out data collection—instead, they need to adapt on the fly. Leaders in Virginia, for instance, are working on ways to ensure more data is collected, including a potential executive order. “These issues sound very staid and not very interesting to so many,” says Koh. “But it’s absolutely lifesaving work, and critical for public communication to show that we’re making progress.”