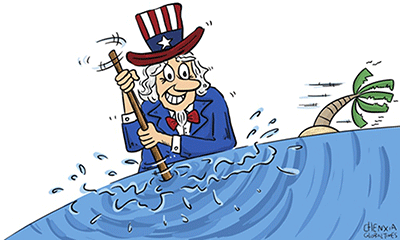 Days after initially saying “it’s none of our business,” Philippine Foreign Affairs Secretary Teodoro Locsin tweeted Wednesday that a diplomatic protest had been filed over China’s passing of a coast guard law. The law that was passed on Friday empowers China’s coast guard to take actions, including the use of weapons, when China’s national sovereignty, sovereign rights or jurisdiction are being illegally infringed upon or threatened by foreign organizations or individuals at sea. Describing the law as “a verbal threat of war to any country that defies the law,” Locsin claimed that inaction means the Philippines is submitting to the new Chinese law.

Why has there been a change in the Philippines’ attitude toward the Chinese law? What has driven the country to lodge such a strongly worded objection?

Despite of a relatively stable and sound China-Philippine relationship in recent years, voices that call for a tougher stance toward China over the South China Sea issue still exist in the Philippines. Many lawmakers in the Philippines reportedly have urged the Philippine government to raise the issue of China’s maritime law with the international community.

“The diplomatic protest filed by the Philippines is more of a response to domestic pressure,” Li Kaisheng, research fellow and deputy director at the Institute of International Relations of the Shanghai Academy of Social Sciences, told the Global Times on Thursday.

But is the Chinese coast guard law really a threat to the Philippines? The content of the law conforms to international conventions and the practices of various countries. The coast guard law and its provisions that allow coast guard to open fire at hostile foreign vessels when national sovereignty and sovereign rights are violated are not unique to China. Many countries, such as the US and South Korea, have similar legislations. China’s coast guard law doesn’t specifically target a certain country, nor is it a threat of war to anyone. Hua Chunying, spokeswoman of the Chinese Ministry of Foreign Affairs, dismissed suspicions on the Chinese move to enact the law on Friday, saying that China is committed to managing its differences with relevant countries through dialogue and upholding peace and stability in the sea. There is no need for the Philippines to feel nervous about the newly enacted Chinese law.

Some forces in the Philippines, either for their own political interests or out of prejudice toward China, misinterpreted China’s legislation as a tough posture and forced their country to make a strong reaction. We hope this unpleasant episode won’t affect the China policy of the Duterte administration. Since the Duterte administration pushed China-Philippine relations back on the track of healthy development, putting aside the South China Sea dispute and focusing on cooperation for mutual benefits, the peoples of both countries have enjoyed tangible benefits. The current Philippine administration should use its wisdom and ability to prevent the unpleasant episode damaging overall bilateral relations.

It’s worth noting that the biggest threat to South China Sea stability is not China, but the US. A US aircraft carrier group led by the USS Theodore Roosevelt entered the South China Sea recently. Chinese scholars also widely believe that the Biden administration will give more weight to the South China Sea issue than his predecessor and pay more attention to woo regional countries such as the Philippines and Vietnam.

The stability of the South China Sea is not in the interests of the US, but it’s what the regional countries need for the sake of their own interests. China and the Philippines shouldn’t let small frictions affect the overall situation, nor should they give any chance for forces with ulterior motives to make waves in the region.