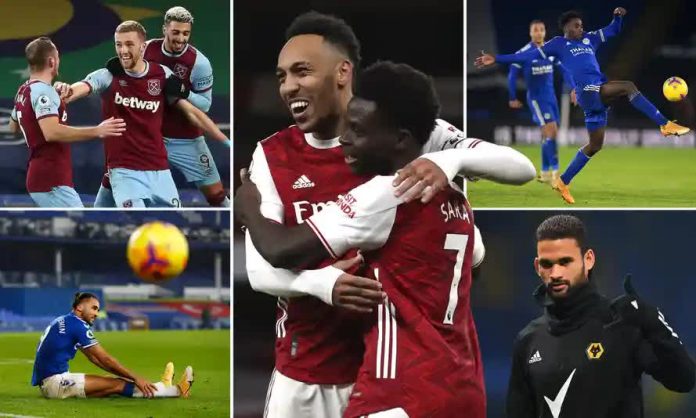 West Ham and Liverpool battle for fourth, Thomas Tuchel makes Kanté central to his Chelsea plans and how does Willian José compare to Raúl Jiménez?

Arsenal hope Pierre-Emerick Aubameyang can face Manchester United, although the priority is his mother’s recovery from the illness that led him to miss the two games against Southampton. His teammates dedicated their victory on Tuesday night to him and, inadvertently, his absencetold something interesting. There have been plenty of questions about Arsenal’s capacity to find goals and take points while missing their captain, whose form has picked up in recent weeks after a bleak run, but at St Mary’s they exuded menace and managed three goals through different scorers. The ascent of Emile Smith Rowe, recovery of Thomas Partey and continued excellence of Bukayo Saka mean they look a far smoother, more cohesive attacking unit than at any time in the past year and it may lessen the burden upon the prolific – but put upon – Aubameyang. His presence would be a welcome boost in another fixture that tests the strength of Arsenal’s recent revival, but they are beginning to show they can tackle big assignments with or without him. NA

The visit of Sheffield United to the Etihad Stadium on Saturday feelspivotal in the title race, after the Blades’ shock win at Old Trafford put Manchester City in the driving seat. City can move four points clear of Manchester United before their tea-time game at Arsenal kicks off, capping a dramatic turnaroundsince these teams met at Bramall Lane on Halloween, when Kyle Walker’s winner helped lift City into the top half. Rúben Dias’ contribution has been immense, but Pep Guardiola has also squeezed more out of his squad. Players who had drifted from the first-team picture – John Stones, Ilkay Gundogan and Joao Cancelo – have become vital cogs. Cancelo joined in August 2019 but struggled to displace Walker from his preferred right-back slot. While his versatility initially prevented him from holding down a first-team place, he is now an indispensable auxiliary man, drifting into midfield regularly and joining attacks down either flank. Against West Brom he was arguably City’s standout performer, setting up the first goal and scoring the second with a ruthless finish. Expect more of the same on Sunday. NMc

3) Hammers and Liverpool battle for fourth

Quiz question: when did West Ham last sit above Liverpool in the league table withhalf of the season played, as they were before Jürgen Klopp’s team’s victory at Tottenham. Answer: 2016. It is certainly interesting that the Hammers are doing well and the Reds poorly, but let’s not get overexcited. At the start of that year West Ham beat Liverpool 2-0 at home, and five members of that starting XI (Cresswell, Ogbonna, Noble, Lanzini, Antonio) could feature again on Sunday. Liverpool meanwhile have as many members of that 2016 West Ham squad in their first-team setup at the moment as of their own (one each: Adrián and Firmino). David Moyes is currently getting plaudits for transforming his squad, while Liverpool are being criticised for an unwillingness to decisively alter theirs. SB

4) Relegation make or break at the Hawthorns

Sam Allardyce has made little secret of his concern about West Brom’s home form. How do you tighten up a side that has conceded 22 goals in its last five games at the Hawthorns? Perhaps by facing Fulham, whose shyness in front of goal is in danger of making their survival prospects almost as sketchy. Fulham could have smashed and grabbed their way to a late win at Brighton on Wednesday but had to settle for a drab point that keeps 17th place within sight. Theylook hard to beat but they have only scored four in their last nine games – three of them coming, a touch perversely, against Liverpool, Spurs and Manchester United – and there is little sign of a proven internal solution unless Scott Parker finds a way to accommodate Aleksandar Mitrovic. West Brom seem the perfect opponents for a confidence boost but the stakes are likely to dictate another cagey affair. Another pasting for Allardyce’s team would suggest their cause is almost impossible. NA

5) Newcastle ideal for pepping up Calvert-Lewin

After a two-game winning run was brought to a shuddering halt at Elland Road in December, Steve Bruce remarked that for Newcastle, “getting to 20 points by Christmas would be an achievement”. It was a laughably modest target, and one they failed to achieve. Almost six weeks on, they are stuck on 19 and getting slowly drawn into the relegation battle. Newcastle’s chances of reaching that magic 20-point marker on Saturday appear slim; they haven’t won at Goodison Park since 2011 and will take on an Everton team back in top-four contention. In recent weeks, Bruce’s side have proved agreeable opponents, so this game represents a good chance for Dominic Calvert-Lewin to break his barren league run. After scoring 11 goals in his first 11 matches this season, the forward has failed to score in the Premier League since. He will be eager to rediscover that early-season form with England returning to competitive action in March. NMc

Willian José stands to make his full debut at Selhurst Park, after a cameo off the bench in Wednesday’s goalless draw at Chelsea, and with Wolves on a run of seven league matches without a win (though they have beaten Palace in the FA Cup in that time) and struggling to adapt to life without Raúl Jiménez, an instant impact would be appreciated. The two players are the same age and a similar build, Jiménez being six months older and a centimetre shorter, but other comparisons are not so even: the Mexican took 114 shots last season, placing him 12th in Europe’s top five leagues (the top four in order: Cristiano Ronaldo, Lionel Messi, Robert Lewandowski, Mo Salah) while the previous season he was 16th, with 113 (the top four in order: Cristiano Ronaldo, Lionel Messi, Robert Lewandowski, Mo Salah). Jiménez is quite simply a prodigious taker of shots, a person never slow to buy a ticket, while in 2019-20 Willian José was joint 131st, with 58, and in 2018-19 he was joint 255th, with 48. Since the start of last season Jiménez has attempted 133 dribbles (José has attempted five), won 44 tackles (seven), attempted 1,272 passes (595). José is a fine player, but patience is likely to be required. SB

Having led Paris Saint-Germain to the Champions League final, Thomas Tuchel knows a thing or two about finding the right balance in a team front-loaded with attacking talent; something his Chelsea predecessor, Frank Lampard, struggled with. Midway through the 2019-20 season, the German switched to a double-pivot system at PSG, two holding midfielders making room for a quartet of creative players ahead of them. Tuchel has already stated his intention to use the system at Chelsea to get the best out of N’Golo Kanté. “I think he is the strongest in the double-six, in the heart of the game,” Tuchel said. “We can use his energy, his range, his ability to recover the ball.” Kanté, who could return from a hamstring injury against Burnley, was pushed further forward by Maurizio Sarri to accommodate Jorginho, then returned to the base of a midfield three by Lampard. Neither manager found room for Kanté and Jorginho in holding midfield, but Tuchel may see things differently. NMc

Two teams tied together in mid-table, 10th and 11th, level on points if not games played (Villa have one in hand), meet in a battle of upward-trajectory sides having a wobble: Southampton have won one of their last seven in the league, Villa one of their last five. Villa have only used 20 players in the league this season, the lowest total in the Premier League, but Southampton were only just above them until Tuesday, when Jake Vokins and Caleb Watts made their first ever Premier League appearances and Yan Valery his first start of the campaign in the 3-1 defeat to Arsenal, suggesting an unusual degree of churn though Ryan Bertrand should return from suspension to replace Vokins. When the teams last met, Southampton recorded a season’s low for touches, successful dribbles, crosses, corners, passes attempted and passes completed. They had four shots on target, an xG of 0.9, and won 4-3. SB

In a season of dramatic rises and falls in the Premier League table, Leicester have stayed largely on track; Brendan Rodgers’ side have spent every week in the top six, and now have a foothold in the top four. Leeds’ visit on Sunday looks a good opportunity to cement their Champions League ambitions, given the Foxes won 4-1 at Elland Road in October. That said, both of these teams have more away wins than at home this season. Leeds’ last five away games have featured two 3-0 losses (one to fourth-tier Crawley in the FA Cup), a 6-2 defeat, a 5-0 win and Tuesday’s hard-fought victory over Newcastle. Leicester had looked prone to inconsistency earlier in the season, but have now lost just once in 10 league games, a run that has coincided with Wilfred Ndidi’s return to the team. Leicester are yet to lose a league game when Ndidi has partnered Youri Tielemans in central midfield. If both are available on Sunday, the result feels predictable. NMc

10) Playing well not enough to save Brighton

Given that they play well enough in most games, it is slightly astonishing that Brighton are now without a win in 14 fixtures at the Amex. They are well organised, work the ball nicely enough and reliably create a chance or two – but unless that starts translating itself into home points it will count for nothing. Brighton announced a record loss of £67.2m this week and cannot afford to slide into the Championship on the back of a series of respectable close-run things. Tottenham are hardly the ideal opponents for a breaking of their hex, although the north London side will have unhappy memories of their most recent visit. That was back in October 2019; an Aaron Connolly-inspired Brighton trounced them 3-0 and Mauricio Pochettino, gone within six weeks, was left to air futile promises that his Spurs team would bounce back.
NA