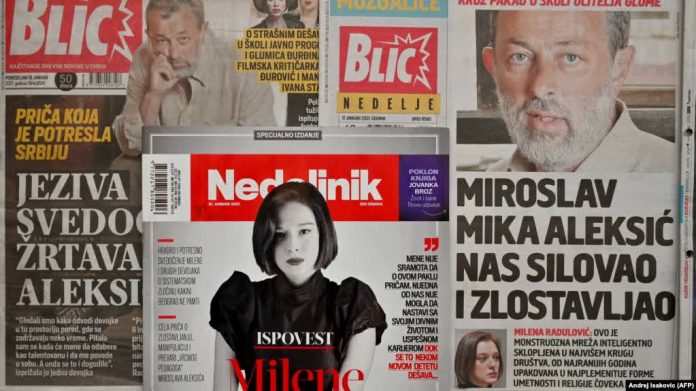 Serbia continues to reverberate with outrage and sympathy for young women who have come forward this month alleging they were raped as students by a veteran director at his private drama school, setting off an “avalanche” of #MeToo accounts that challenge Serbian society to fix a “broken system.”

The torrent came after a rising star of international cinema publicly accused the storied mentor and founder of the Stvar Srca acting studio, Miroslav “Mika” Aleksic, of repeatedly raping her beginning nine years ago, when she was 17.

For decades, the 68-year-old Aleksic has worked and hobnobbed with many of Serbia’s biggest celebrities.

Through her actions, [Milena Radulovic] gave strength to other women to come forward and not allow them to remain victims of the man who abused their trust in the worst way.”

He was taken into police custody on January 17 and has reportedly been charged with eight criminal counts of rape and seven illegal acts spanning more than a decade.

Aleksic is said to have denied any wrongdoing.

Belgrade-born Milena Radulovic is the actress who first broke years of public silence about Aleksic, airing her accusations in an interview published by the newspaper Blic on January 16 along with word that she had pressed charges against him.

Police have encouraged other alleged victims to come forward.

Since then, at least four other young women and an underage girl have accused Aleksic of sexual abuse spanning 2008 to 2020.

One of them who went public, actress Sara Zeljkovic, said Aleksic had touched her inappropriately after he’d invited her into his office when she was “16, 17” years old.

Culture Minister Maja Gojkovic has praised Radulovic for having “started an avalanche with her courage.” She described it as Serbia’s “Harvey Weinstein case.”

“We have a lot of challenges ahead of us,” Gojkovic told the audience at a multi-industry State Of Equality In Serbia event on January 18.

Radulovic’s accusations come two years after another Serbian case arose to symbolize the pushback by sexual assault victims after revelations in the United States and Britain against Weinstein, the disgraced Hollywood producer.

The resulting debate, including multiple forums on social media for other Serbian women to speak out, suggest Gojkovic’s emphasis on the challenges are not misplaced.

Radulovic’s testimonial has also spawned a deluge of “me too” accounts from women elsewhere in a Balkan region with a history of toxic masculinity and the abuses that it can engender.

One of them, a Bosnian Facebook page called Nisam Trazila — or “I didn’t ask for it” — has attracted particular attention.

But Radulovic’s blunt account of Aleksic’s boldness – which allegedly included forcing himself on her next door to a classroom — shone like a damning klieg light on Serbia’s problem.

And the volume of public complaints and personal testimonies through traditional and social media this week speak to an ongoing problem that Serbian officials are suddenly scrambling to address.

Probably best-known as a director for his films Soba 405 and Heart’s Affair, Aleksic was a regular in the Radio Belgrade troupe during the 1980s who also made an unsuccessful stab at nationalist politics in the early 1990s.

Aleksic has been ordered to remain in pretrial detention for at least 30 days.

A judge with the high court in Belgrade cited the threat of witness intimidation, the danger of further crimes, and the seriousness of the charges against the defendant.

These terrible phenomena should make us wonder what kind of society we live in and what we can do to make it a better place for our children’s lives.”

The prosecution continues to investigate. It has underscored the gravity of the crimes, the status of the alleged victims as minors, and the suspect having “enjoyed the trust of the entire Serbian public.”

Radulovic is a 25-year-old actress who prospered in Serbian film before appearing in international thrillers like the American film An Ordinary Man in 2018 and last year’s Russian film The Superdeep.

She alleged in the Blic interview published on January 17 that Aleksic’s abuses occurred nine years ago while she was in school, and that they were repeated.

Since the original interview, she has declined to talk about specifics but reportedly gave a full account to police.

“Through her actions, she gave strength to other women to come forward and not allow them to remain victims of the man who abused their trust in the worst way,” the Women’s Initiative of Serbia said of Radulovic.

Another actress, Danijela Stajnfeld, alleged last year in a documentary film titled Heal Me that she had been raped by an influential man in Serbia’s film industry.

Stajnfeld has responded to Radulovic’s statements by saying the accusers coming forward “are the heroines of our society.”

Artist Kristina Kovac said via Twitter that Radulovic and the other accusers had “put their necks on the line” by speaking out and possibly saved “all those children…from [falling victim to] a terrible, horrific experience and lifelong trauma.”

Writer Marija Radkovic told RFE/RL’s Balkan Service it was essential that a public space be opened to condemn and prosecute perpetrators within a “culture of violence.”

She credited Radulovic with “starting the demolition of that establishment” — saying the problem is “something that all girls encounter.”

“Who knows how many [other] girls actually encounter that?” Radkovic said.

‘What Kind Of Society’

Serbian Deputy Prime Minister Zorana Mihajlovic, who presides over a national coordination body for gender equality, expressed “gratitude to the girls and women who found the strength and reported the violence” in the Aleksic case.

“These terrible phenomena should make us wonder what kind of society we live in and what we can do to make it a better place for our children’s lives,” Mihajlovic said.

The most widely followed Serbian prosecution of an abuser in a position of power arose in 2018, on the heels of the Weinstein case.

It resulted in the conviction of local municipal leader Milutin Jelicic for sexual harassment and illegal acts toward his female assistant. He was sentenced to several months in prison.

The victim in that case, Marija Lukic, spent two years suffering illness and nightmares that she blames on her former boss in the town of Brus, 250 kilometers from Belgrade.

Two days after she complained, Lukic was fired from her job and her husband was ordered to vacate his place of business.

Jelicic was eventually removed and prosecuted, but not before prosecutors had thrown out similar complaints filed by six other Brus women.

“The good thing is that he is in custody and he will probably remain in custody as long as the investigation lasts,” Lukic added, “because other girls, since it probably happened for many years, will not have the pressure of his presence, so they’ll be able to report their experiences that they, unfortunately, had with him.”

In response to the public outrage, officials have proposed several measures to combat sexual abuse and the abuse of minors.

Mihajlovic praised police and prosecutors. On January 19, she pledged to seek to broaden a register of sex offenders against children to include other kinds of violent or sexual offenders.

But in the same breath, Mihajlovic acknowledged that the original list formed several years ago had run into “problems with whether it is filled in and how consistently.”

The original list also is closed to the public.

The expanded one “should be public,” Mihajlovic said.

Serbia’s ombudsman, Zoran Pasalic, announced on January 20 that he would launch an initiative to change regulations in order to restrict who is allowed to “work with children.”

One possible scheme would detail and better vet the provision of education and teaching services by individuals and legal entities beyond basic regulations.

Pasalic said he didn’t want remedies to fade once the current case “ceases to be interesting in the media…without solving the problem.”

Local media suggest that around 3,000 people attended Aleksic’s acting school over the course of four decades, many of them aspiring youths.

Vesna Stanojevic is the coordinator of Safe House, a growing network of women’s shelters in Serbia that helps victims of domestic and other abuse.

She expressed support for Radulovic and encouraged authorities to ensure a swift trial instead of allowing the case to drag out — which she called the “No. 1” problem in many cases.

“Believe me, we have women who spend more than half a year at a safe house and these court proceedings have barely started,” Stanojevic told RFE/RL’s Balkan Service.

In the meantime, there are few guarantees for the women who come forward.

“There’s no guarantee [of protection],” Stanojevic says, suggesting that statewide officials are overly reliant on lower-level officials to spot and tackle such problems.

Only two of the 26 women who died as a result of domestic violence in Serbia during 2020 had reported prior violence, she said.

“That means that they either didn’t recognize the violence or were afraid to report it, which is also one of the big reasons why violence isn’t reported,” she said.

Stanojevic also warned against using the capital, Belgrade, as a sole measure of progress throughout Serbian society.

“There’s a big problem here because you can hardly change the court in a small town, while in Belgrade you can always do something more,” she says.

In other regions, she says, “it’s really a lot harder.”

In 2019, RFE/RL’s Balkan Service marked 25 years of reporting in one of the world’s most contested regions, championing professionalism and moderation in a media landscape that is sharply divided along ethnic and partisan lines.

Andy Heil is a Prague-based senior correspondent covering the Balkans, the Transcaucasus, and science and the environment. Before joining RFE/RL in 2001, he was a longtime reporter and editor of business, economic, and political news in Central Europe, including for Reuters, Oxford Analytica, Acquisitions Monthly, the Christian Science Monitor, Respekt, and Tyden.