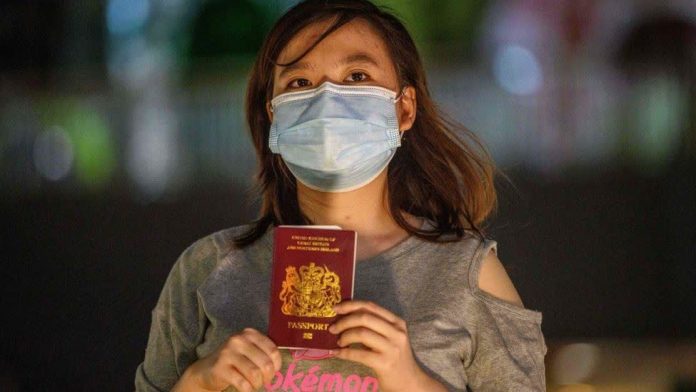 About 300,000 people are expected to leave Hong Kong for Britain using a new visa route which opens on Sunday.

Hong Kong’s British National (Overseas) passport holders and their immediate dependants will be able to apply for the visa using a smartphone app.

Boris Johnson said the move honoured the UK’s “profound ties of history and friendship” with the ex-British colony.

The visa was announced in July after China imposed a new security law in Hong Kong.

Beijing has previously warned the UK not to meddle in domestic issues.

Those who apply and secure the visa will be able to apply for settlement after five years and then British citizenship after a further 12 months.

Although there are 2.9 million citizens eligible to move to the UK, with a further estimated 2.3 million dependants, the government expects about 300,000 people to take up the offer.

The prime minister said: “I am immensely proud that we have brought in this new route for Hong Kong BNOs to live, work and make their home in our country.

“In doing so we have honoured our profound ties of history and friendship with the people of Hong Kong, and we have stood up for freedom and autonomy – values both the UK and Hong Kong hold dear.”

Nathan Law, a pro-democracy campaigner who fled Hong Kong and now lives in exile in the UK, welcomed the announcement.

“It’s a commitment to the historical agreement to Hong Kong and I think it’s important that we offer safe exit for the people who are facing political suppression in Hong Kong,” he told the BBC.

Those eligible for the visa can apply online and will need to book an appointment to attend a visa application centre.

From 23 February BNO status holders who hold an eligible biometric passport will be able to use an app to complete their application from home.

Home Secretary Priti Patel said this was to give applicants greater security amid fears they could be identified and targeted by the authorities.

“Safeguarding individuals’ freedoms, liberty and security is absolutely vital for those individuals that go through this process,” she said.

The BNO status was created before the UK handed responsibility for Hong Kong back to China in 1997.

Before Hong Kong was returned, the UK and China made an agreement to introduce “one country, two systems”, which meant, among other things, rights such as freedom of assembly, free speech and freedom of the press would be protected.

But the UK has said this agreement – known as the Joint Declaration – is under threat because the territory passed a new law in June that gives China sweeping new controls over the people of Hong Kong.

China has said the law is necessary to prevent the type of protests seen in Hong Kong during much of 2019. However, the law has caused alarm both in Hong Kong and abroad, with opponents saying it erodes the territory’s freedoms as a semi-autonomous region of China.

The new visa system helping British nationals escape Hong Kong is perhaps the clearest example yet of the government’s promise to be a force for good in the world.

It is one thing to condemn oppression. It is another to do something about it.

And here the UK is delivering on a promise made more than two decades ago to those it has a duty to protect.

But there are questions.

What support are these migrants going to have?

In the long term they may well enrich Britain’s economy and culture, but in the short term, they will need help.

And above all, how will China retaliate, as they have promised? Will Beijing ban BNOs from public office, from voting or even from leaving? What will the UK do then?