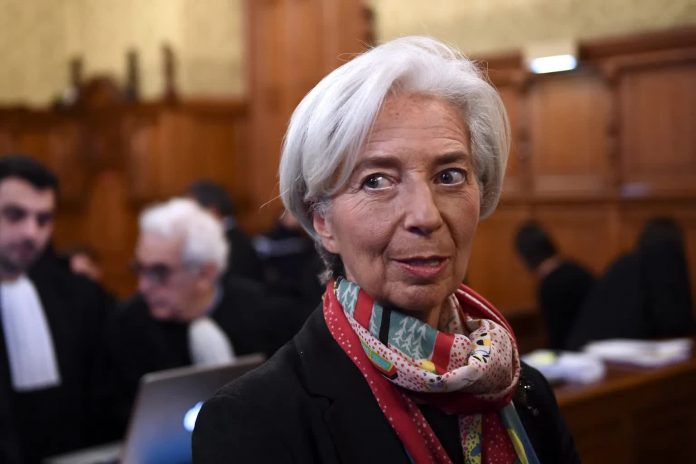 TOKYO – On any list of economies that risk “turning Japanese,” the Eurozone often places near the very top and deservedly so.

After a decade of secular stagnation, negligible yields despite runaway public borrowing and banks veering from one credit event to the next, the risks of a Japan-like funk are altering Europe’s trajectory. And reorienting priorities at European Central Bank (ECB) headquarters 9,300 kilometers from Tokyo.

As 2021 unfolds, officials in Frankfurt are realizing a perennial Bank of Japan problem is now theirs too: a currency that is against all odds strong and that is creating fresh economic headwinds at the worst possible moment.

In recent days, news reports from Bloomberg and others paint ECB President Christine Lagarde’s team redoubling efforts to understand and address the euro’s brawn versus the US dollar. Its counterintuitive strength is making it ever harder for the economic bloc to withstand already intense Covid-19 economic fallout.

The ECB is actually dealing with two Japan-like challenges. One is why the euro, like the yen, is rising in direct contradiction to interest-rate differentials that should advantage the dollar. The other is the risk of falling into a protracted funk from which the region’s economies can’t escape with conventional tools.

This latter concern is, of course, a global one. A top priority for policymakers from London to Pretoria and from Beijing to Jakarta is to, in the words of economist Ethan Harris at Bank of America, “avoid getting trapped in a permanent low-inflation world – so-called Japanification.”

How the ECB responds could offer clues everywhere. On the face of it, the US appears better positioned to bounce back from the Covid-19 crisis than Europe, broadly speaking.

The US, though, is debating pumping another US$1.9 trillion of stimulus into the world’s biggest economy – on top of trillions of dollars of earlier fiscal jolts. On Wednesday, Federal Reserve Chairman Jerome Powell’s team pledged to continue making huge bond purchases.

The International Monetary Fund expects 5.1% US growth this year, clawing back 2020’s contraction. Yet the eurozone isn’t seen returning to pre-pandemic levels until 2022. The IMF forecasts only 4.2% economic growth for the region.

And yet, the euro maintains an upward bias after rising about 9% versus the dollar in 2020, the most since 2017.  Much of that rally – nearly 5% – came in just the last two months of last year.

This is perplexing, in Trump-adjusted terms. Biden, it’s widely expected, plans a far less mercantilist and confrontational approach toward exchange rates. In other words, the two-plus-decade-old “strong dollar” policy that Trump scrapped seems operational once again.

Many analysts – and Fed leader Powell, too – argue that the dollar is taking a fiscal-expectations hit. With Biden’s Democratic Party now controlling the White House and both houses of Congress, punters are betting on increased borrowing pushing America’s national debt toward $30 trillion. This twin-deficits problem – both for the national budget and the current account – in theory supports the euro.

The counter-argument: Biden’s spending will be targeted and productive in ways that are dollar-positive. Biden’s plan, argues economist Joseph Stiglitz of Columbia University, is to invest big in infrastructure, technology, education and training to build new economic muscle.

Whereas Trump gave away trillions in tax cuts for the uber-wealthy and waged trade wars, Biden is seen focusing on getting the domestic economy in shape to compete globally. That, Stiglitz says, is “as important to the US’s own prosperity as it is to the functioning of the global economy.” That also will, boosters say, increase foreign direct investment into the US, lifting the dollar.

For now, though, the ECB is left with a too-muscular euro exacerbating deflationary forces at a time when eurozone inflation is already below zero. Officials there are probing the euro’s strength since the pandemic began – and what role the divergence between its quantitative easing versus the Fed’s may be playing.

To some extent, the ECB faces a structural barrier, says analyst Nick Andrews of Gavekal Research. The issue relates to so-called swap curves, which he says tend to be highly liquid and “less distorted by central bank asset purchases than sovereign curves.” This is particularly true of spreads between five-year and 10-year swap rates.

For much of the last 20 years, the differential between the US dollar 5-year to 10-year swaps and the euro has correlated closely with the euro-US dollar exchange rate. “In other words,” Andrews says, “when the US dollar yield curve steepens relative to the euro yield curve, the US dollar tends to depreciate versus the euro.”

This is precisely what’s happening now.

Why, ECB officials wonder, hasn’t an increase in market rates in recent months driven the dollar upward? The yield on 10-year US Treasury securities doubled to 1% over the last five months. Germany’s 10-year bonds, by contrast, yield only 0.54%.

Also, why aren’t currency traders more worried that the IMF’s predictions for Europe might prove too rosy? Europe is on the edge of a double-dip recession as Covid-19 rates have governments clamping down anew on travel, leisure activity and non-essential trips to shopping areas.

Germany, the eurozone’s bellwether, recently strengthened such curbs, which are expected to remain in place at least until mid-February.

That, naturally, puts Lagarde in the hot seat. Her ECB team says all liquidity-boost instruments could be adjusted if needed to boost inflation. To many, that seems a warning to traders not to test the ECB’s resolve. But that is exactly what traders are doing.

The ECB’s central objective is keeping inflation “below, but close” to 2%. Since 2014, back when Mario Draghi held the reins at ECB headquarters, consumer prices have consistently undershot that level. And in November, inflation dipped to a -0.3% annual rate. The strong euro also complicates the view of ECB economists that inflation will slowly rise to about 1.4% by 2023.

Given the tense nature of global markets and ever-present trade-war fears, currency intervention by the ECB seems a non-starter. The lesson from Japan is to go even bigger with monetary stimulus. To date, the ECB’s pandemic asset-purchase program totals 1.85 trillion euro, or just over $2.2 trillion, and runs until March 2022.

In addition, eurozone banks have access to special long-term funding at borrowing rates as low as -1%. Collateral rules were loosened to give banks easier access to ECB liquidity. Yet the ECB needs to plot fresh moves to alter market perceptions toward greater confidence. And that means going even bigger with QE while allying with fiscal managers across the eurozone.

The warning from Japan

Here, Japan’s own experience is instructive. Since 2013, BOJ Governor Haruhiko Kuroda aggressively hoarded assets. His team grabbed more than half of all outstanding government bonds and became by far the biggest stock investor by loading up on exchange-traded funds. Since 2016, the BOJ has toyed with negative rates to turbocharge its QE regimen.

Yet the BOJ missed opportunities to gain greater traction. Kuroda’s team, for example, avoided loading up on foreign debt as a means of capping a rising yen.

It grew complacent over the last 12 months of pandemic chaos. The BOJ said ad nauseum that it stood ready to act if conditions warrant it. And yet – nothing.

By standing pat, Kuroda is allowing the deflation he pledged to defeat to return. In December, Japan’s core consumer prices dropped 1.0% from a year earlier, the steepest drop in more than 10 years.

The BOJ has been reluctant to prod the government into bolder and more creative action. It refused, for example, to buy up bigger blocks of corporate debt, tying those purchases to pledges by CEOs to boost wages. It refused to buy large blocks of local-government debt to free up money that could be used for direct cash handouts or regional investments.

Kuroda isn’t known for musical skills. But in recent years, he and then-ECB head Draghi riffed off one another like guitarists working on a complex composition. In 2012, a year before Kuroda arrived at the BOJ, Draghi pledged to do “whatever it takes” to protect eurozone stability. Draghi was in many ways reading from the BOJ’s songbook of the previous decade.

Within a couple of years, Kuroda was riffing off Draghi playing off the BOJ’s aggressive actions with his own whatever-it-takes pledges. Yet it’s now clear Kuroda only did most of what he could’ve to put Japan on a path to strong, self-reinforcing growth that could withstand the odd international stumble.

The ECB now finds itself at such a crossroads. The Fed has appeared far more assertive in its easing moves over the last several months. Powell’s team, for example, cut conventional rates by 150 basis points to roughly zero in March, planning to keep them there at least through 2023.

More importantly, Powell & Co rolled out at least nine new liquidity-boosting programs and pledges to deploy at least $120 billion per month via asset purchases. The timeline is deliberately fuzzy: until “substantial further progress” is made on reducing employment and generating inflation.

Congress, meantime, has deployed considerably more fiscal stimulus than Europe, spending that pushed the budget deficit to at least 11% of gross domestic product last year. The combined 19 eurozone economies are working with a deficit of roughly 9% of GDP.

In the eurozone, fiscal loosening also has been highly fragmented amid vastly different priorities from country to country. Some, for example, focused more on supporting companies, while others propped up households.

This should cut both ways for the dollar-euro. Negative at first, as investors worry about increased debt, but ultimately dollar positive as those investments boost US output. For now, many punters are preoccupied with the negative implications, much to Europe’s chagrin.

One Japan-related mistake Lagarde’s team must avoid is believing that monetary policy or advantageous exchange rates alone can revive Europe. It’s vital not to take the onus off governments to do their jobs.

“The ECB is joining the ranks of those central banks who – because domestic tools have largely been used up – discover the exchange rate as a monetary policy ‘tool,’” Commerzbank told clients last week.

For now, that tool isn’t working as hoped. Not with the herd sensing that the euro’s climb has further to go – and the ECB unsure how to stop it.