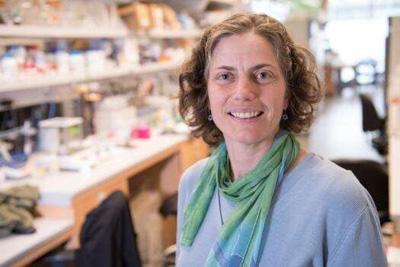 by Mary Kenyon, University of Iowa

New research from the University of Iowa and University Hospitals Cleveland Medical Center demonstrates that offspring can be protected from the effects of prenatal stress by administering a neuroprotective compound during pregnancy.

Working in a mouse model, Rachel Schroeder, a student in the UI Interdisciplinary Graduate Program in Neuroscience, drew a connection between the work of her two mentors, Hanna Stevens, MD, Ph.D., UI associate professor of psychiatry and Ida P. Haller Chair of Child and Adolescent Psychiatry, and Andrew A. Pieper, MD, Ph.D., a former UI faculty member, now Morley-Mather Chair of Neuropsychiatry at Case Western Reserve University and Investigator and Director of the Neurotherapeutics Center at the Harrington Discovery Institute, University Hospitals Cleveland Medical Center.

Stevens’s lab studies the long-lasting impact of stress during pregnancy, which can lead to neuropsychiatric impairment in offspring during early life and in adulthood. Pieper’s lab focuses on discovery of neuroprotective treatments, exemplified by the pharmacologic agent used here, known as P7C3-A20, which has previously been shown to protect the adult brain from injury.

Schroeder spent time in both labs early in her graduate school career and was inspired to bring the two lines of research together in her own work, investigating the potential impact that P7C3-A20 might have in protecting the embryonic brain during adverse events in pregnancy. Her work is the first to explore the therapeutic potential of prenatal exposure to P7C3 compounds.

“Prenatal stress increases the risk for offspring to have neurodevelopmental problems,” Schroeder said. “We wanted to know whether the P7C3-A20 compound protected the embryonic brain from damage. Our results show that offspring are protected from the negative effects of stress when the mothers are treated with P7C3-A20 during the same time.”

The research was published online this week in the journal Antioxidants & Redox Signaling.

Previous work by Pieper’s lab has shown that P7C3-A20 enables nerve cells to maintain normal levels of an energy molecule known as nicotinamide adenine dinucleotide (NAD+), under toxic or injury conditions that are otherwise overwhelming and energy-depleting for the cell.

Schroeder’s research showed that chronic prenatal stress in mice disrupted the embryonic brain’s NAD+-synthesis machinery, which led to degeneration of nerve cell axons, learning deficits, and depression-like behavior when the offspring reached adulthood. Schroeder demonstrated that when prenatally-stressed pregnant mice were simultaneously treated with P7C3-A20, their offspring were protected from these negative effects.

“By stabilizing critical NAD+-producing mechanisms, we enabled the developing embryonic brain to continue developing normally despite the stress,” Schroeder said.

“Though there are many challenges associated with administering medicines during pregnancy, Rachel Schroeder’s discovery represents an exciting move forward in understanding how prenatal stress harms the brain, and strategies for protecting the developing embryo,” said Pieper, who is also a psychiatrist at the Louis Stokes VA Medical Center in Cleveland.

This study represents an important proof of concept for a new approach to early prevention of neuropsychiatric problems, Stevens said. “Neuropsychiatric problems are the most common chronic illnesses of young people, which means we need many more ways to protect the brain as it develops. Our lab is focused on mechanisms of brain development prenatally, a critical time when we could make a difference.”