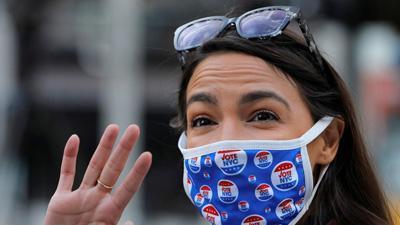 The fleeting spectre of political unity over the GameStop stock scandal was quickly dispelled as firebrand Democrat Alexandria Ocasio-Cortez denounced Republican Senator Ted Cruz – who just agreed with her – as wanting her dead.

The decision by the brokerage Robinhood to block all purchases of GameStop stock by retail investors – but leave sales open and let hedge funds trade unhindered – temporarily united Ocasio-Cortez (D-New York) and Cruz (R-Texas) on Thursday. AOC had called Robinhood’s decision “unacceptable” and floated the idea of a House Financial Services Committee hearing.

The heart-warming display of bipartisan unity against speculators and in favor of the little guy was over within the hour, however as AOC ditched the Robinhood issue overboard in favor of identity politics.

“I am happy to work with Republicans on this issue where there’s common ground, but you almost had me murdered 3 weeks ago so you can sit this one out,” she said, sub-tweeting Cruz.

“Happy to work [with] almost any other GOP that aren’t trying to get me killed,” she added. “In the mean-time if you want to help, you can resign.”

I am happy to work with Republicans on this issue where there’s common ground, but you almost had me murdered 3 weeks ago so you can sit this one out.Happy to work w/ almost any other GOP that aren’t trying to get me killed.In the meantime if you want to help, you can resign. https://t.co/4mVREbaqqm

What’s this all about? Well, in AOC’s world, the January 6 unrest at the Capitol, when supporters of then-President Donald Trump broke into the building and disrupted the joint session of Congress became her almost getting killed somehow. While the rioters didn’t actually murder anyone and members of Congress were safely evacuated to the nearby military facility, several people did die – four demonstrators to begin with and one Capitol Police officer, later in the day, from causes unknown. Two more officers have since committed suicide.

Democrats wasted no time in declaring this an “insurrection” they claimed was “incited” by Trump, using this as a pretext to have him banned him from all social media and impeach him for the second time. That process is moving forward in the Senate, even though Trump is now a private citizen, with a view to disqualifying him and anyone who supported him from ever holding public office under the 14th Amendment, once used against the Confederacy. Not to mention occupying DC with 25,000 National Guard troops.

Hyperbolic much? Yes, but that’s what happens when a party that has no hang-ups about using power gets a hold of it.

AOC’s second tweet is basically saying that the only “good” Republicans she can see herself working with are of the Liz Cheney/Mitt Romney variety – meaning some fifteen warmongering NeverTrumpers who voted to impeach Trump in the House and may do so in the Senate. In other words, the rest are essentially seditious insurrectionist traitors who need to resign or be hounded out of office – in the name of unity, of course.

The more important thing at play here is how fast AOC pivoted from the stock scandal – which has fully exposed how the US financial system is rigged in favor of major players and against the little guy – to virtue-signalling.

That seems absurd on its face, given the widespread sympathy for the Reddit investors giving the hedge fund short-sellers the what-for.

This is beyond absurd. @FSCDems need to have a hearing on Robinhood’s market manipulation. They’re blocking the ability to trade to protect Wall St. hedge funds, stealing millions of dollars from their users to protect people who’ve used the stock market as a casino for decades. https://t.co/CGkJxVfzkv

Tlaib hasn’t backtracked on that – yet, anyway.

Meanwhile, the “reddit investors” have declared they will support the politician or government official who “stands up for the people and investigates Robinhood.” Doing so is a no-brainer, right?

Except, wait, didn’t identity politics become a dominant force in the US following the 2011 populist mass revolt against Wall Street? It’s almost as if the greatest fear of the US political establishment is some kind of an alliance between the populist left and the populist right…

Once you know the System and how it really works, you can see the future. pic.twitter.com/ux6Hvqcgnr

How intriguing… and revealing, don’t you think?