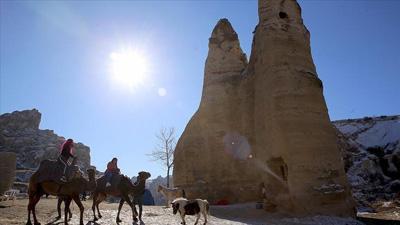 With most of the world staying at home due to COVID-19, Turkey‘s tourism revenues in 2020 totaled $12.6 billion, a 65.1% decline from the previous year, the Turkish Statistical Institute (TÜİK) announced on Jan. 29.

Tourism expenditures also fell 74.9% compared to the previous year, down to $1.1 billion.

The number of departing visitors dropped 69.5% from the previous year to 16 million people.

While 80.3% of visitors were foreign nationals, with 13 million people, 19.7% of them were Turkish citizens living abroad, with 3.1 million.

In the fourth quarter of 2020, tourism revenue fell in half to $4 billion, again due to coronavirus-related travel fears and restrictions.

In the quarter, all expenditure types slipped compared to same quarter of the previous year.