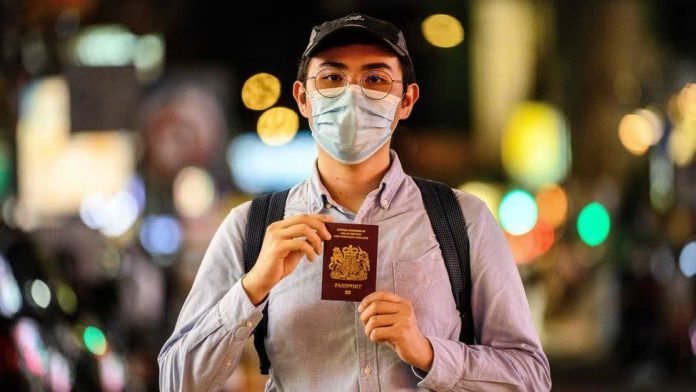 image caption A Hong Kong residents with their BNO passport

The UK is introducing a visa system that will give millions of people from Hong Kong greater opportunities to live and work in the UK from 31 January.

It will also provide them with a route to British citizenship.

How does it work?

British National Overseas citizenship is a type of British nationality created in 1985 that people in Hong Kong could apply for before the 1997 handover to China to retain a link with the UK.

The lifelong status, which cannot be passed down to family members, did not give holders any special rights.

It meant only they could visit the UK for six months without a visa.

But the new system will allow these BNO citizens and their close family to apply for two periods of five years to live and work in the UK.

After the first five years, they will be able choose to to apply for indefinite leave to remain, which means an individual can live and work without reapplying for a visa.

And after one year of this status, individuals will be able to apply for British citizenship.

How many people are expecting to come?

The British government estimates 5.4 million Hong Kong residents will be eligible for the scheme, about 72% of its 7.5 million population.

It is difficult to say how many eligible people will actually come to the UK.

But the government published an impact assessment putting the number between 9,000 and 1,048,100.

How much will it cost?

Applicants will have to buy a Hong Kong BNO visa.

But BNOs and their family will also have to pay the international health surcharge (IHS) to use the NHS – £624 a year for an adult and £470 a year for a child.

And applicants will also need to prove they can support themselves and dependents financially for the first six months of their stay.

Why is the UK doing this?

Hong Kong was handed from the UK to China under the Sino-British Joint Declaration agreement, which said the communist country would respect the territory’s capitalist system and rule of law for 50 years, an arrangement known as “one country, two systems”.

But in June 2020, China’s parliament imposed a severe security law on Hong Kong, following months of protest and unrest in reaction to an extradition law.

And the UK government was among those who said it “restricts the rights and freedoms of the people of Hong Kong and constitutes a clear and serious breach of the Sino-British Joint Declaration”.

What does China think?

China has consistently said the affairs of Hong Kong are a domestic issue and nothing to do with the UK.

And in response to the UK government’s move, China has said it will consider not recognising BNO passports as legal travel documents.

Although, it is unclear how this will be enforced.