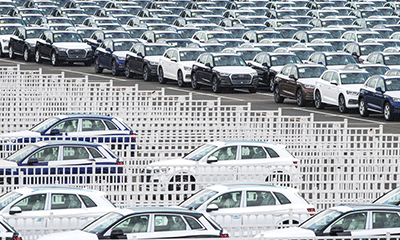 At the World Economic Forum, Diess said China “is moving in the right direction and that it is easier to invest in China than China is allowed to invest in Germany or other places.” Quinn said on the UK Parliament Foreign Affairs Committee on Tuesday that his bank was not in a position to question police requests when it agreed to freeze accounts of anti-government activists. He also said some senior HSBC executives experienced the violence during the protests in Hong Kong in 2019. Quinn replied to those “hypocritical” accusations against him that he was “not going to comment on democracy” because he’s a banker, not a politician.

Let’s just say that the two business elites were telling the truth. The West now has formed an opinion “iron curtain” to smear China and calls for politicization in business circles, which seriously threatens the livelihood of multinational companies. Some companies can’t stand it anymore, which is why Volkswagen and HSBC had launched verbal “revolts.”

China and the European Union completed negotiations over a bilateral investment treaty at the end of 2020, indicating that there is a high level of reciprocity in the investment environment of the two sides in general, and this environment reflects the comprehensive social governance in the economic field. Two societies that can get along and reach deep agreements on investment are not as different or even incompatible in terms of integrated social governance as the Western media have claimed.

Even the majority of the Europeans agree that Europe has no serious geopolitical conflicts with China and that closer cooperation with China is in Europe’s interest. The friction between China and the EU mainly exists in terms of values. However, if the friction in values can become a powerful reason to block our economic and trade cooperation, it will be a terrible setback for human exchanges and civilization. A few Western ideologues are as self-indulgent as barbarians, and they are utterly unworthy to sit on top of modern civilization.

Volkswagen gets more than one-third of its sales in China, and HSBC made most of its profits from Chinese market in 2020. Some British Members of Parliament who advocate that HSBC should withdraw from Hong Kong SAR are a bunch of arrogant laymen.

Coincidentally, the Japanese government, which for some time has been echoing the US on China’s human rights issues, said on Tuesday that Tokyo does not believe China has committed “genocide” in its Xinjiang Uyghur Autonomous Region. This is a tough hat that has been woven by extreme anti-China forces in the West for a long time, and the one that former US secretary of state Mike Pompeo pinned on China before he stepped down. This is no different to the declaration of a “diplomatic war” on China, and Tokyo is aware that it had to keep its distance from US.

This mistaken perception of China, coupled with arrogance and hubris, has contributed to the hysteria of some Western public opinion and policy toward China in the past few years, especially in the US. Some US political elites and their allies are so presumptuous about smearing China, regardless of the facts, and even blindly destroy their own interests just to contain China. Such irrationality is spreading in the West.

In the 21st century, however, this kind of politicization is ultimately untenable because the overriding desire of people everywhere is the same: to live a good life. Geopolitical fanaticism belongs to only a few elites. Such fanaticism could only flip public opinion, but it’s more of a game on the surface. The deep level of public opinion will always support peace as the most valuable and harmony as the source of wealth.

There has been a startling miscalculation of China by some political elites in the US and its major allies. They have misjudged China and the price their people at home are willing to pay to find fault with China. Their attempt to encircle China and to set up an “iron curtain” of public opinion against China is bound to be a farce of history, which will be destroyed completely as time passes. They are pulling a net but just trying to stop the wind across the prairie.