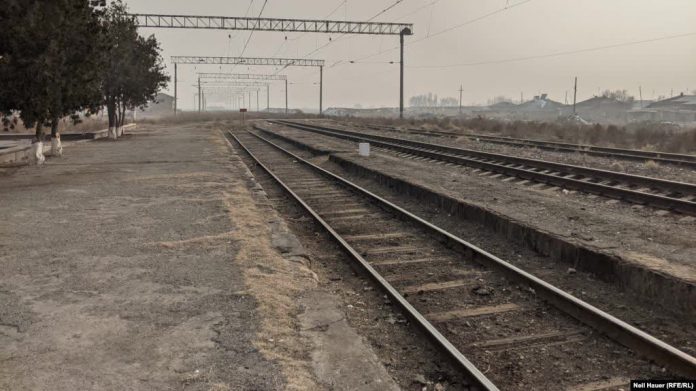 YERASKH, Armenia — Just an hour south of the Armenian capital, Yerevan, the country’s main north-south highway heads east and cuts through a roundabout in the center of Yeraskh, a dusty, threadbare village of several hundred people.

Ringed by hilly country of barren fields and yellow mountains, an older road will lead you a short way before suddenly ending as it runs into a massive, 30-meter-high earthen berm.

On the other side of the berm is barbed wire, entrenched military positions, and Naxcivan — the diamond-shaped, large Azerbaijani exclave nestled along southwestern Armenia.

For 30 years this odd border was little more than a curiosity and the site of the occasional shootout between Azerbaijanis and Armenians.

But Yeraskh and its border with Naxcivan are now at the center of the next stage of the aftermath of the second Nagorno-Karabakh War that concluded in November with more than 5,000 killed, tens of thousands displaced, borders reordered, and Russian soldiers entrenched as peacekeepers.

This is also where an old Soviet rail line, abandoned for a generation, is set to run once again, perhaps bringing trade and new economic opportunities with it.

On January 11, Armenian Prime Minister Nikol Pashinian and Azerbaijani President Ilham Aliyev held their first meeting since the war, in which Armenia lost control of large swaths of territory it had occupied in Azerbaijan.

In Moscow alongside Russian President Vladimir Putin, the architect of the cease-fire deal that ended the war, the two leaders announced that Armenia would be getting a rail link to Russia, its principal ally.

That rail line, according to the Russian daily Kommersant, entails the repair and reopening of the Soviet-era railway from Yerevan.

The line runs through Yeraskh into Naxcivan before crossing back into southern Armenia, then Azerbaijan proper, and finally into Russia.

The line would also give Azerbaijan a direct rail link to close ally Turkey via nearly the same route through Naxcivan.

On a broader scale, the prospect of the railway’s restoration offers Armenia an economic driver it has never possessed since gaining independence in 1991.

But for locals in Yeraskh who have memories of often-violent disputes with their neighbors, the picture is not entirely rosy.

“I was stunned when I heard about it,” said an official in Yeraskh, who asked not to be named due to the sensitivity of the issue. “I only learned about it from the newspapers. I’m only happy about it because it means people will stay here, in the village, and not leave to find work in Russia,” he said.

The Russians Are Here

The Russians, meanwhile, have come to Yeraskh.

A small Russian garrison flying the white-blue-red tricolor stands near the town’s crossroads. “[The Russians] arrived on the first day of the [recent] war,” the unnamed official said.

Like many in the town, the official has a personal history with the Azerbaijanis on the other side of the berm.

“I have defended this village with my own hands,” he said. “My father did the same before me.”

Yeraskh was the site of some of the very first fighting between ethnic Armenian and Azerbaijani villagers in the opening stages of the first Nagorno-Karabakh War that started with guerrilla warfare in the late 1980s and developed into a full-blown conflict that lasted until 1994.

In January 1990, armed clashes involving light weapons and rocket artillery erupted in Yeraskh after members of the nationalist Azerbaijan Popular Front Party — which later held power in Azerbaijan (1992-93) — attacked the village from Naxcivan.

The fighting stopped after the Soviet army was deployed to the area.

The clashes also helped launch the career of Vazgen Sarkisian, who served as Armenian defense minister and later prime minister and considered one of the country’s most-powerful figures in the 1990s before he was assassinated.

The railway that runs through Yeraskh was closed shortly after the 1994 end of the war as trains travelling through Naxcivan were occasionally attacked.

The station today is a rather sad sight.

Dilapidated and nearly abandoned, it still hosts daily trains from Yerevan and provides much of the local employment.

But it, too, ends at the huge earthen barrier at the border.

There is another new Russian garrison in the area, five kilometers to the east in the village of Paruyr Sevak.

Like Yeraskh, most of the village is unremarkable with two exceptions: the de facto annexed Azerbaijani enclave of Karki (Tigranashen in Armenian) on its outskirts, and the Russian helicopter that was downed here by Azerbaijani forces on November 9, just hours before the cease-fire ended the war.

“I saw the helicopter shot down with my own eyes,” said an official in Paruyr Sevak, who requested anonymity. “It was a provocation [by the Azerbaijanis].”

Unlike in Yeraskh, the Paruyr Sevak official sees the potential of reopening the railway as a threat to his village.

“People here are mostly engaged in agriculture, growing fruits and vegetables,” he said. “If the border will open [for trade] it will destroy the local economy. Turkish imports will lower the prices [of our produce],” he claimed.

It is unclear if renewed trade with Azerbaijan or Turkey is in the offing once the railroad is running again.

The ninth point of the tripartite agreement that ended the war in November includes the “unblocking of regional economic and transport links.”

Turkey’s stated reason for keeping its border with Armenia closed — as it has for nearly three decades — was always explained by Armenia’s occupation of the seven Azerbaijani regions adjacent to Nagorno-Karabakh, an issue that was resolved by the cease-fire deal.

But that doesn’t automatically mean that Turkish freight cars will soon be arriving in Yerevan.

For others, meanwhile, the memories of the “old days” during the Soviet era are enough to instill hope for the future.

Sos Arakelian, a 68-year old pensioner in Yeraskh, remembers when his Azeri neighbors were friends, not foes.

“Why shouldn’t we live next to the [Azerbaijanis]?” he asked. “In communist times we got along just fine. There were no problems then.”

Arakelian, like others in the village, hopes for new economic opportunities if and when the rail line with Naxcivan is restored.

“Of course it is hard to find work here,” he said. “I had to go to Russia for years [to get a job]. But if the railway will be running [into Naxcivan] again, then people will have jobs and the village won’t die.”

And the years of cross-border conflict? For Arakelian, he thinks that was nothing personal and shouldn’t affect future ties between Armenians and Azerbaijanis.

“Sometimes they shoot at us,” he admited, “but they know we’ll shoot back at their village. If we both stop shooting forever, why can’t we be friends?”

Neil Hauer is a freelance writer based in Armenia.