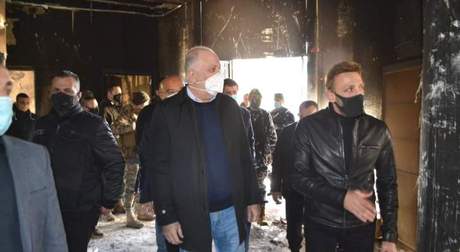 Caretaker Interior Minister Mohammed Fahmi on Sunday defended the performance of security agencies in unrest-hit Tripoli, claiming that there was an attempt to “destroy the state’s prestige” through attacks on certain public buildings.

“Security agencies did not commit mistakes in Tripoli and there was an objective to destroy the state’s prestige,” Fahmi said in a TV interview.

“Tripoli’s municipality is not a barracks for the army or security forces but rather represents state institutions and the investigation has not ended yet,” the minister added.

“Security forces and the Lebanese Army defended the Serail in Tripoli and when they (protesters) failed to storm it, they headed to the municipality building,” Fahmi said.

The minister also dismissed accusations that the army’s performance was marred by shortcomings during the unrest.

Fahmi later inspected the municipality’s torched building at the head of a senior security delegation, where he was met by municipal chief Riad Yamaq.