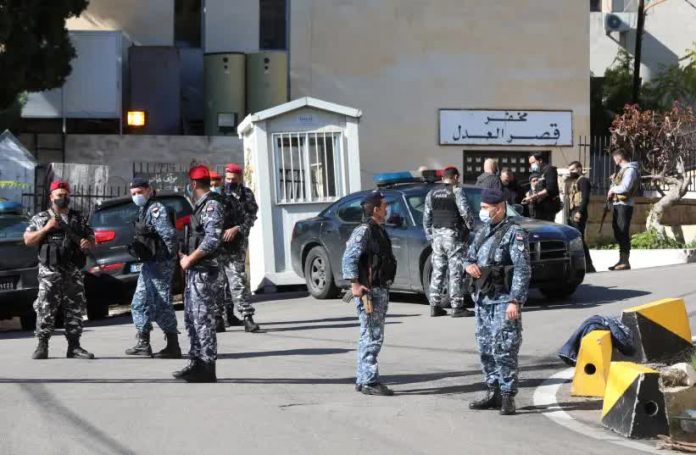 The poorest continue to lead demonstrations in one of the most disadvantaged parts of the country.

Members of the Lebanese police gather outside Baabda prison, Lebanon, November 21, 2020.
(photo credit: REUTERS)
Protests are continuing in the long-suffering former economic hub of Lebanon, Tripoli, the country’s second-largest city. It is located in the northern part of Lebanon, in one of the most resource-deprived areas of the country, where 60% of the population lives on under a dollar a day.
For more stories from The Media Line go to themedialine.org
“This is an uprising of a population at the political, economic and social margins of Lebanon,” Dr. Raphaël Gourrada, an independent analyst specializing in Lebanon and the region, told The Media Line.
Adding fuel to the fire is the death of demonstrator Omar Taibi at the hands of authorities on Thursday, in what marked the fourth straight day of protests. Over 200 people were injured during clashes between protesters and security officials in the wake of Taibi’s death.
Protests initially began over the announcement of a complete lockdown due to an increase in cases of the coronavirus, which has killed over 3,000 people in Lebanon.
“The COVID-19 pandemic has resulted in several lockdowns since April 2020 until today. Lebanon applies the harshest lockdown in the world, where everything is closed, including food stores,” Gourrada said.
“This aggravated the economic quagmire Lebanon has been stuck in for several years and also contributed to the further impoverishment of the population.”
The protests come on the heels of protests that began in October 2019 and lasted through the initial months of the pandemic.
The current protests are different from those original ones that started in Beirut and spread nationwide.
“Tripoli is a specific situation. This is a failed economic capital because Tripoli was the main harbor of Beirut before the formation of Greater Lebanon in the 1920s. It has known constant downfall in opposition to Beirut, who rose as the economic and administrative capital of Lebanon,” Gourrada said.
The State of Greater Lebanon was the forerunner of the modern country.
Mokhtar, an activist who participated in the protests last year and declined to give his last name, has also noticed the class difference in the demonstrations.
“The current protests are led by the poor; the 2019 protests were led by the middle class. Both are welcomed against this 30-year-old corrupt political class. And both will unite in the streets if any reforms are not met,” he told The Media Line.
Roudy Hanna, a young twenty-something who lives in Beirut, can empathize with the frustration of the Tripoli protestors.
“I understand why they are there. I know for a fact that someone paying rent and eating three meals a day and staying warm won’t go to the streets in a pandemic,” he told The Media Line.
When it comes to hunger, Gourrada is concerned about the role it could play in the current demonstrations.
“The protest here may be the spark which lights a national uprising,” Gourrada said. He said that he and other analysts have shared a fear since last year, with the coronavirus pandemic and the economic backlash that Lebanon has faced in its wake, “that these initial peaceful protests of the Lebanese revolution may transform into hunger riots as we saw in the past among African countries.”
“The population has no choice at all but to take to the streets and violently protest against these leaderships which are not able to reform and change the Lebanese economic and political system,” he added.
Besides COVID-19, Gourrada says that several other events have created even worse conditions on the ground for the Lebanese people since the initial 2019 protests.
This includes the Aug. 4, 2020 blast at the Beirut port.
“Even if it’s not directly related to Tripoli, this was a horrific incident that resulted in hundreds of deaths and thousands of injuries,” he said. “It was the very symbol of the total incapacity of the Lebanese leadership to lead the country and to safeguard its population from danger.” A great many of the Lebanese leadership was aware of the nearly 3,000 tons of ammonium nitrate stored at the port that led to the devastating explosion, he says.
An additional issue that further exacerbates Lebanon’s plight is the lack of political reform.
“Since October 2019, nothing has changed politically,” Gourrada said.
Prime Minister Saad Hariri resigned in late October 2019, and it took approximately three months to form a new government, led by Hassan Diab. Diab’s government resigned several days after the port explosion, but he has served on as prime minister in a caretaker capacity since no government has been formed since. Mustapha Adib was selected as prime minister after the blast but quit when he was unable to form a government. Nearly a year after his resignation, Hariri was named prime minister-designate and has yet to form a government.