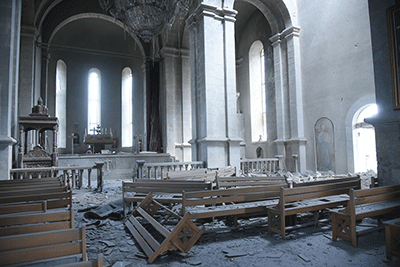 The collapse of the old system of interstate relations was a boon for Azerbaijan but hamstrung Armenia. Looking ahead, the picture is less clear.

Post-liberal disorder (Armenia MFA)
We live in a time of uncertainty: The order that has governed the basic parameters of international politics since the end of the Cold War is coming under unprecedented challenge. Last year’s war between Armenia and Azerbaijan can be seen as the first interstate war of this new era and so has relevance beyond the borders of the Caucasus. What can the Second Karabakh War tell us about the fate of what is known by international relations scholars as the “liberal international order”?

The liberal international order is the post-World War II system of interstate relations, backed by American power, that promised a more peaceful and orderly world through democratization, international law, and economic integration. In Europe – where these norms had been most fully realized – this order was being expanded by means of NATO and the European Union. Organizations like the Organization for Security and Cooperation in Europe, the Council of Europe, and others were devised to spread the benefits of liberal internationalism to the less fortunate states left outside that expanding zone, including the South Caucasus.

Until the late 2000s, this order had appeared unassailable. But the global financial crisis of 2008, the fallout from the wars in Iraq and Afghanistan, the rise of China and the challenge of populism in the West all put it into doubt. The onetime promise of peace and prosperity though the spread of liberal values was quickly losing credibility.

The fact that the bloodiest and most virulent of all “frozen” conflicts in the former Soviet space exploded again when that order had deteriorated was no accident; the declining salience of the previously dominant, taken-for-granted norms and values played a major role in its thawing.

To be sure, the South Caucasus had always been a region where this order had remained relatively weak. Even between Georgia and Azerbaijan – the region’s friendliest dyad – energy cooperation and investment flows had not translated into more institutionalized bilateral integration. Moreover, the region’s three states had chosen to engage with the main suppliers of liberal public goods – NATO and the EU – on an ad-hoc basis, and to vastly varying extents. The deadly enmity between Armenia and Azerbaijan had, in no small part, been kept in check through an old-fashioned balancing act orchestrated by Russia – happy to provide weaponry to both sides – rather than an acquired respect for the liberal norms inherent to international law.

How that balance between Armenia and Azerbaijan broke down is by now well understood: the Armenian leadership vastly – and fatally – underestimated the disparity between its own capabilities and those of Azerbaijan, pursuing an assertive foreign policy it could not afford. Armenia also misjudged the willingness and ability of both Russia and the West to intervene in the conflict and furthermore was caught off guard by changes in regional politics – most importantly, a much more interventionist Turkish foreign policy. Combined, those developments all made it possible for Baku to undertake the war that ended in a decisive victory.

But what this account – centered as it is on power-political shifts – leaves out is how the decline of the liberal international order enabled it all.

Consider how much the picture has changed over the past 10 years.

In 2010, the U.S. was still a power to be reckoned with in the South Caucasus: pushing NATO membership for Georgia and energy corridors between Azerbaijan and Europe that bypassed Russia, while remaining actively involved in the OSCE Minsk Group mediating the Armenia-Azerbaijan conflict. The EU’s newly launched Eastern Partnership, and its inherently liberal normative framework, was seen as a desirable short-cut towards development in all three regional capitals. And EU-candidate Turkey could still be coaxed by the U.S. – and to a lesser extent the Europeans – into pursuing “football diplomacy” with Yerevan, while still seeing its security as integrated with, and inseparable from, the wider NATO framework. The region’s states had to orient themselves in a context defined by straightforward competition between Russia on the one hand, and ‘the West’ – broadly defined – on the other.

A decade later, that world had changed beyond recognition. The U.S. had lost interest in grand, long-term strategic interventions in peripheral regions, and had moved away from most of the demonstrative commitment to “values” in its foreign policy; it was little more than an irrelevance during the negotiations surrounding the Second Karabakh War. The Eastern Partnership had diverged into ad-hoc, à-la-carte arrangements with former Soviet states much less willing to accept unilaterally imposed modernizing packages; the most Brussels could muster during the conflict were ineffective expressions of “concern” in the face of large-scale violations of international humanitarian law. The erosion of the U.S. and EU influence had opened the door for middle-power Turkey to choose its own assertive foreign-policy path, independently providing a range of services for clients of its own choice around its neighborhood.

For smaller countries with flexible foreign policies and the ability to play several sides – like Azerbaijan – this development was a boon: The appearance of Turkey as an autonomous actor in particular allowed it leverage against Russia. To small states with fewer options – like Armenia – these developments proved disastrous. Moscow’s long-standing lock on Yerevan’s foreign and security policies – predicated in no small part on the latter’s deep-seated historic distrust of Turkey – left it far less prepared for a more fluid and unpredictable world, where playing within the simple binaries of the past – West/Russia, democratic/authoritarian – no longer had the same currency.

A blip, or the new normal?

The current implications go far beyond the South Caucasus itself. In the U.S. the question is to what extent a new administration, arguably much more wedded to the tenets of the liberal international order, will be able to roll back the damage done to the institutional and normative restraints once taken for granted by regional and extra-regional actors – and not just in the South Caucasus.

In the coming years, will there be a reversion to the pre-Trump templates or a new, more restrained, less interventionist foreign policy? Was the Trump era a blip, a mere interlude, or the indication of something deeper, something structural?

Structural or not, the question of whether – and how – the new team in Washington will be able to successfully address the challenges to the liberal international order will matter far beyond America’s borders. It will matter to supra-national institutions like the EU, built on liberal precepts and thus far incapable of wielding the blunter power-political instruments – hitherto largely outsourced to the U.S. through NATO – needed in these more illiberal times. It will be relevant to middle powers like Turkey, and their choice to explore their own policy autonomy in a less hegemonic era.

And it will matter to small states like Armenia, Azerbaijan and Georgia, and the foreign policy choices at their disposal, as NATO expansion, the continued viability of liberal values, and the formal negotiations around Nagorno-Karabakh all have come into question. Whether we see a (last-gasp?) attempt to revert to the old, a more pragmatic adaptation to the new, or something in between, the result will be significant for already complex regions like the South Caucasus.

Kevork Oskanian is an honorary research fellow at the University of Birmingham.