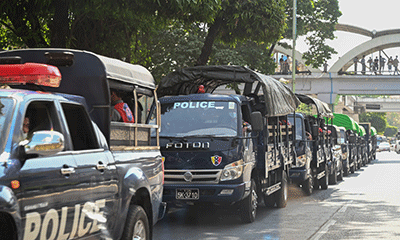 Police forces are pictured in a line of trucks in the downtown area of Yangon on Monday. Myanmar’s military announced a state of emergency earlier Monday and later said it seized power and will rule the country for at least one year after having detained the country’s top political leaders. Photo: AFP

Myanmar’s military announced a state of emergency few hours earlier on Monday and said power had been handed to the commander-in-chief of the armed forces, following the military’s detention of Myanmar’s leaders including Aung San Suu Kyi and President U Win Myint.

Western media see it as a de facto coup, as the power transition occurred just hours before Myanmar’s newly elected parliament was supposed to begin its opening session, meaning a confirmation of the November election result.

“China is a friendly neighbor of Myanmar, and we hope all parties in Myanmar can properly handle differences under the constitutional and legal framework and safeguard political and social stability,” Wang said.

The political uproar came after a great wave of dissatisfaction from the military and army-backed Union Solidarity and Development Party (USDP) against the governing National League for Democracy (NLD), which won the November election but was accused of fraud by military, media reported.

The NLD clinched an overwhelming victory, giving Aung San Suu Kyi a second five-year term in office. The NLD took 83 percent of the ballot in the election, while the army-backed Union Solidarity and Development Party (USDP) won 33 out of 476 parliament seats, much fewer than the party had expected.

Experts said the military’s actions can be seen as an adjustment to the country’s dysfunctional power structure. China has maintained good relations with both the current government and the military, and it hopes that the two sides can reach a compromise through negotiations to maintain peace and stability. They also noted the country should be wary of possible external interference.

Over the past five years of the NLD rule, the army and the NLD have been in a state of discord, a Beijing-based expert told the Global Times on Monday on condition of anonymity.

The military and USDP lawmakers together account for only about one-third of the seats in the Myanmar parliament, making it difficult to push their proposals, and they are unable to block proposals from the NLD, said the expert, noting that the military and the USDP may feel that their interests could not be guaranteed.

From 1962 to 2011, Myanmar’s military dominated the country’s politics, economy and society. After the democratic transformation took place in Myanmar in 2011, the military gradually lost its political power.

Since the 2015 election, the military-backed USDP had been defeated in elections and lost seats in parliament, which made the military realize that it is very difficult to obtain power through elections, the expert said.

“The military’s actions, therefore, can be viewed as an adjustment facing Myanmar’s imbalanced power structure,” he said.

Tensions in Myanmar had escalated over the last week. A military spokesperson said on Sunday that they would not rule out a coup if the alleged voter fraud, involving over 10.5 million cases, were not investigated, urging the election commission to make public the final polling data, CNN reported. The commission on Thursday rejected the accusation, saying any errors were not enough to impact the final result.

The United Nations Secretary-General Antonio Guterres on Friday expressed “great concern” over Myanmar’s situation and called for the November election result to be respected and democratic norms to be adhered to. Sixteen nations, including the US, also expressed their opposition to any attempt to alter the outcome of the elections through a joint statement from their international missions released on Friday.

Analysts said that it remains to be seen whether the military will yield to international pressure. The detention of governing leaders may trigger resentment among NLD supporters, and even a social backlash that will put pressure on the regime, especially amid the ongoing COVID-19 pandemic.

In a statement the NLD party released on Monday on behalf of its detained leader Aung San Suu Kyi, it urged people not to accept a military coup and should protest, Reuters reported.

Yin Yihang, a scholar from the Beijing-based think tank Taihe Institute, told the Global Times that while the military has detained Aung San Suu Kyi and other senior NLD officials, it has been unable to fully control grass-roots NLD members, with further protests by NLD groups anticipated.

“Now the NLD has developed into a fully fledged party organization, ranging from the federal to the township level. After the military takeover, it will be difficult for the NLD to remain quiet,” Yin said.

According to US media, White House press secretary Jen Psaki responded on Monday (ET Sunday) by saying that the US was “alarmed” by the situation in Myanmar, warning Myanmar’s military that it will “take action” if they proceed with an “apparent coup” against the country’s civilian leaders.

However, some experts mentioned that former US president Donald Trump, who refused to admit his election defeat and reportedly incited the Capitol riots, might be the Myanmar military’s inspiration.

Fan Hongwei, director of the Center for Southeast Asia Studies at Xiamen University, told the Global Times on Monday that the US may impose sanctions on Myanmar, and military pressure cannot be rolled out.

Yin Yihang told the Global Times that although the US had limited official exchanges with Myanmar during the Trump administration, US civil rights groups have maintained a presence in northern Myanmar, radicalizing local people.

“As per the current situation, US may also adopt a ‘color revolution’ approach to Myanmar,” Yin said.

“The situation in Myanmar is likely to be an opportunity for the Biden administration, which has multiple members from Team Obama, to repair relations with Myanmar, to make Myanmar problematic and use Myanmar to put pressure on China,” Fan said.

“Myanmar is a country that does not welcome interference by big powers. China has maintained good relations with both the current government and the military, so it still hopes that the two sides can negotiate a compromise to maintain peace and stability,” said Fan.

As Myanmar’s largest trading partner, China’s trade volume with Myanmar accounts for more than 33 percent of Myanmar’s total trade volume, according to data released by China’s Ministry of Commerce in 2020. Therefore, a stable political situation in Myanmar is conducive to exchanges and development between the two countries.

An employee of a Chinese company surnamed Liu in Yangon, in the commercial capital of the country, told the Global Times that life is still relatively normal. While mobile signals have been cut off, the network signals are still functioning. “The market is still open, we feel everything is stable. The China-Myanmar pipeline project is operating normally, as are other copper and nickel mines.”

As for whether Chinese employees will be pulled out of Myanmar, Zheng noted that they are waiting for further notification from the Chinese Embassy in the country.

Myanmar’s air travel authority said on Monday that it suspended all flights in the country due to the state of emergency. All banks in the country have been temporarily closed.

US pastor on leave after Melania Trump ‘trophy wife’ comments