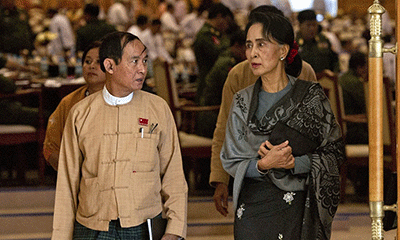 Myanmar military on Monday declared a state of emergency which will last for one year in the country, and Vice President Myint Swe would be elevated to acting president. On Monday early morning, State Counselor Aung San Suu Kyi, President U Win Myint and other senior officials were detained by the military. Many said Myanmar experienced a “military coup”.

The second general election of the country took place in November last year. Suu Kyi’s National League for Democracy (NLD) performed even better than in 2015. The military has accused voting fraud in the election. Tensions in Myanmar have risen and the speculation of a potential coup rapidly spread.

The military junta had ruled Myanmar for decades since 1962. Later the military took the initiative to step back and carried out democratic reforms. Suu Kyi, who had been under house arrest for a long time, officially led the NLD into power in 2016. The military keeps 25 percent of the seats in parliament, but its influence has been shrinking. But the military has played a leading role in cracking down on Rohingya people. The move was condemned by the West, but supported by the Myanmese.

Myanmar’s democratization process went smoothly initially. Suu Kyi and her NLD performed well in the election, but deep interest conflicts have not been tackled. The democratically elected government and the military junta have both made some efforts and the differences were eased for a while, but they failed to establish a mechanism to fundamentally resolve them. Overall, their frictions as well as the ethnic conflicts remained unchanged. The political resources brought by democratic elections were far from enough to fully resolve these problems.

This time, the Myanmar military detained elected leaders and declared a state of emergency, which is a heavy blow to the much applauded democratization process of Myanmar and put many people in awe. The prosperity brought about by political reforms alone was superficial and fragile. The predicament of Myanmar lies in that political reforms failed to provide any impetus to solve deep-seated problems, nor did they provide a safety valve to avoid repeated political wrangling.

The military junta’s rule that lasts half a century shaped interests pattern in Myanmar. The country faces complicated ethnic conflicts. No matter what new system Myanmar is to adopt, it will face challenges. It is difficult to redistribute interests without any conflicts. Myanmar is lucky enough to not have any bloody revolutions. But the road ahead will be extremely unstable. Myanmar needs robust economic growth for a rather long time to support its adjustment of interests. It is not easy to make all the people and social classes have a sense of gaining and not fear the future, and ensure the process of economic growth is stable and orderly.

So far, there are only a few governance models in the world, and the West is forcefully advocating its electoral system. Smaller countries do not have many options. As they walk toward modernization, most of them have chosen the Western-style electoral system. The setbacks and bumpy roads they encountered were interpreted as their due costs for democracy. Except for following traditional systems, it is merely impossible for them to explore new political systems.

The actions taken by Myanmar’s military cannot break the current dilemma the country is facing. Political struggles are expected to intensify in a short period of time, and Myanmar is bound to face pressure from the international community. Suu Kyi has already urged Myanmar people to protest. Countries including the US have demanded the military release the detained political leaders. Uncertainties are looming over Myanmar.

The political spectrum in the Southeast Asian region is complex. Traditional practices in the region and pressure from Western systems have long been competing with each other. Perhaps result matters the most, and it will be assessed by two criteria – whether there is long-term political stability and whether the economy develops fast to benefit all the people.