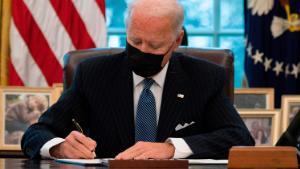 (CNN)There’s a golden rule in politics: Don’t mess with a member in his or her home state unless you want trouble.

Which is why it’s more than a little perplexing that Vice President Kamala Harris gave an interview to a local West Virginia TV station late last week expressly designed to put pressure on West Virginia Sen. Joe Manchin (D) to support the Biden administration’s $1.9 trillion Covid-19 stimulus plan.
“To your point in West Virginia, one in seven families is describing their household as being hungry, one in six can’t pay their rent, and one in four small businesses are closing permanently or have already closed, so it’s a big issue in West Virginia and across the country,” Harris told WSAZ. “And that’s why the president and I are offering the American Rescue Plan.”
Which — BREAKING NEWS! — Manchin didn’t like.
“I saw [the interview], I couldn’t believe it. No one called me [about it],” Manchin told WSAZ over the weekend. “We’re going to try to find a bipartisan pathway forward, but we need to work together. That’s not a way of working together.”
(Harris, it’s worth noting, also did an interview with a local station in Arizona to pressure Sen. Kyrsten Sinema on the same bill, according to Punchbowl News.)
Made aware of Manchin’s annoyance, the White House reached out to the West Virginia Democrat over the weekend to smooth the waters, according to CNN’s Manu Raju. It’s unclear whether the outreach calmed Manchin down.
“We’ve been in touch with Sen. Manchin, as we have been for many weeks and will continue to be moving forward,” White House press secretary Jen Psaki said on Monday. Psaki declined to say on Monday whether Harris’ interview was designed specifically to apply pressure on Manchin.
Regardless, it’s a weird, rookie mistake for this administration to make. Both Biden and Harris spent time in the Senate and should understand how a move like this would be perceived by Manchin — as a not-at-all-subtle threat for him to get in line (or else.)
That urging is the sort of thing that works far better in a phone call — or a White House meeting. No senator is going to like the vice president (of their own party!) doing an interview with a local news station in their state to say that this piece of legislation that they are unsure about is actually really, really good thing for their state. Not one.
Manchin has so far resisted taking a position on the stimulus package. He told CNN that he had concerns about the price tag, but added: “We’re gonna try to make Joe Biden successful.”
(Interestingly, West Virginia Republican Gov. Jim Justice advocated for Congress to go big with a stimulus package during an interview on Monday morning with CNN’s Poppy Harlow. “Trying to be per se fiscally responsible at this point in time … if we actually throw away some money right now, so what?” said Justice.)
Why play hardball so quickly? Because the Biden White House is almost certainly going to need to pass the Covid-19 stimulus bill through reconciliation — a legislative tactic that would allow Democrats to move the package to the floor (and to passage) with a simple majority rather than 60 votes. (Read this for more on reconciliation.)
But in order for that to work, Democrats need all 50 of their senators to support the legislation. If that happened, Harris would be able to break the tie in Democrats’ favor.
Look, Manchin may well wind up finding a way to be for the $1.9 trillion package. But, this move certainly doesn’t help him get there.
Vermont Sen. Bernie Sanders, an independent who caucuses with Democrats, expressed optimism that his side would get there.
“All of us will have differences of opinions, this is a $1.9 trillion dollar bill, I have differences and concerns about this bill, but at the end of the day we are going to support the President of the United States,” he said on ABC on Sunday.
Meanwhile, a group of Republican senators have offered their own Covid-19 stimulus counter-proposal (with a $600 billion price tag) — and are headed to the White House on Monday to talk to President Biden about it.
That could, in theory, offer the White House a way out if they don’t believe they can count on Manchin to vote for the $1.9 trillion proposal. It’s not at all clear they are willing to admit defeat on that, however.
What is clear is that the White House made a beginner’s mistake by putting pressure on Manchin via the Harris interview. Something about catching more flies with honey than vinegar.