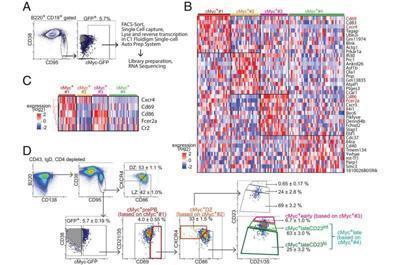 No story in biology is more intriguing than the one involving B cells and the intricate processes that result in antibody production—it’s a story about mathematics, a tale of genetics and a saga of how vast armies of tiny antibodies can control a diverse range of disease-causing agents.

The subject of B cells and antibody production was once the arcane topic of biologists and physicians. But in the grip of a global pandemic that has claimed the lives of more than 2 million people, concerns about antibodies and the immune response have become subjects of daily television news reports.

Antibody production is at the core of concerns about health and survival, such as the odds of recovering from COVID-19 and how well vaccines can prevent SARS-CoV-2 infection. Over a lifetime, humans are capable of generating 10 trillion different antibody molecules, a number so staggering that it raises the question of how it’s even possible.

Antibodies are proteins, which means their production is encoded by genes. But the 10 trillion figure presents what seems a critical mathematical dilemma. How can the human genome, which is composed of 30,000 genes, produce 10 trillion different antibodies? It would seem impossible that a person could make more antibodies than genes existing in the genome, which would have to be orders of magnitude larger to accommodate the vast number of antibodies.

As it turns out, evolution has produced mechanisms to solve that mismatch. Humans can generate a seemingly endless supply of antibodies by joining together separate gene segments before they are transcribed. The process is called somatic hypermutation, which allows B cells to mutate the genes that they use to produce antibodies. This stunning process allows B cells to produce antibodies that keenly bind to SARS-CoV-2—or any other virus or bacterial species that invades the body.

Research is underway in London that is breaking new ground in the understanding of germinal center activity—how B cells become activated and how immunoglobulins reach their stunning breadth and diversity. B cells do not enter the light and dark zones of lymph nodes willy-nilly. Their entry and exit of these critical regions depend on a variety of factors, each aimed at producing specific types of B cells and floods of highly specific antibodies.

A B-cell can be a plasma cell whose role is to secrete large quantities of antibodies; or, a B cell can be a memory B cell, which is formed inside germinal centers following primary infection. Memory B cells can survive for decades. Their role is to “remember” an infectious agent, the antigen.

Having a record of a previous cause of disease speeds the response the next time the same antigen is encountered. There are other B cells in the germinal centers, some in intermediary phases of development.

The London-based team at the Immunity and Cancer Laboratory of the Francis Crick Institute is studying a process known as affinity maturation inside the germinal centers of lymph nodes.

Affinity maturation is the process in which antibodies develop their keen affinities for antigens. An antigen can be a fragment of a virus or a snippet of a bacterium, for example, that are brought to the germinal centers by dendritic cells. Dendritics not only sound the alarm about danger, they present the evidence. T cells are also in the germinal centers and are kingpins in the overall immune response, even playing a role in helping B cells to mature. Germinal centers are beehives of activity.

“Affinity maturation depends on how efficiently germinal centers positively select B cells in the light zone, where dendritic cells deposit fragments of an infiltrator,” wrote Dr. Rinako Nakagawa and a Crick Institute team. Their extensive analysis about activities in the germinal centers is published in the Proceedings of the National Academy of Sciences.

“Positively selected germinal center B cells recirculate between the light zone and dark zone and ultimately differentiate into plasmablasts and memory B cells,” Nakagawa and the Crick Institute team report.

The oncogene cMyc also functions as a cell-cycle regulator. It is a multifunctional transcription factor driving a range of activities necessary for rapid cell division. It also inhibits the expression of genes with anti-proliferative functions. Because of its ability to induce apoptosis, cMyc’s expression is tightly regulated.

As Nakagawa and colleagues found, cMyc is also intimately involved in mechanisms of the germinal center, playing a role in the formation and maintenance of the centers in lymph nodes throughout the body. It is a 62-kilodalton protein composed of 439 amino acids and belongs to the helix-loop-helix class of zipper transcription factors.

“This study redefines germinal center B cell–positive selection as a dynamic process that ensures maintenance of a broad range of affinities in germinal centers,” Nakagawa and colleagues wrote. “We found that affinity-dependent cell division occurred in the light zone and therefore that process is not restricted to the dark zone.”

While the Crick Institute’s research is redefining mechanisms in the light and dark zones, their work also builds on studies that date back decades to elucidate how B cells and antibodies mature into key forces of the immune defense.

The story behind the human ability to produce trillions of antibodies is one of the most amazing in nature, and highlights why the mammalian immune system is one of the most complex networks of surveillance and response in the known universe.

Indeed, the immune systems of humans and other animals have evolved genetic mechanisms that allow them to generate a staggeringly high number of antibodies. By joining separate gene segments together before they are transcribed, an abundance of antibodies can be produced. Not all mammals use the same strategies, but the end result is a molecular army of disease-fighting immunoglobulins that the body tailors to fight infiltrators.

Why am I always cold? 10 medical reasons for cold intolerance