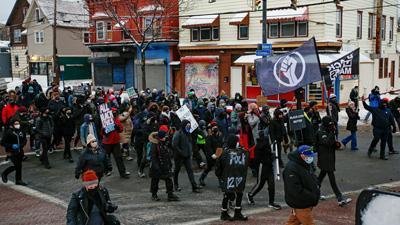 Protesters in Rochester, New York toppled a police barricade during a demonstration after footage emerged showing officers pepper spraying a handcuffed 9-year-old, stoking outrage and prompting the suspension of the cops involved.

The demonstrators staged a march on Monday to protest the excessive use of force against the young girl, who was pepper sprayed as nine officers responded to a domestic disturbance call last week, rallying outside the Rochester Police Department to demand accountability.

Footage circulating online showed the march and ensuing rally, including the moment protesters overturned a metal barrier erected outside the police station, allowing them to advance to an inner fence surrounding the squad car parking lot.

Protesters have started taking the fence down and moving closer to the police station. #ROCpic.twitter.com/FCOUU3ksjO

Protesters successfully overturn the barricades set up outside this Rochester Police station and make their way up to the inner parking lot fence #Rochester#NewYork#RochesterPD#RochesterProtestspic.twitter.com/LwOj1yh820

Demonstrators were also seen rattling the fence around the lot, but while police reportedly told them to disperse, little was done to push back the protesters, with officers instead milling in the doorway of the police station and periodically issuing orders through a loudspeaker set up in the parking lot.

Protesters have begin trying to attempt to take down the second barrier fence. You can hear in the background police are saying “This is the Rochester Police Department please exit the area immediately”. #ROC@GSLSHOWpic.twitter.com/i0GPc3hUD7

Protesters shake the fence as a man chants “White allies gettin’ it poppin’” at the Rochester Police station #Rochester#NewYork#RochesterPD#RochesterProtestspic.twitter.com/jD9QIaM4Yt

Activists passed around a megaphone to deliver brief speeches during the rally, some heard calling for the firing of the officers who sprayed the young girl, while footage from earlier in the day showed a sizable crowd taking part in the march, estimated in the hundreds by videographer Brenden Gutenschwager.

There’s an active protest on North Clinton Avenue at the police station in Rochester New York this is after a nine-year-old girl was pepper sprayed by police a few days ago. More updates coming shortly. #ROC@GSLSHOWpic.twitter.com/0mxPml3hk6

As the protest was still underway, Rochester Mayor Lovely Warren issued a statement noting that at least some of the officers involved in the 9-year-old’s pepper-spraying had been suspended, pending an internal probe. While it isn’t clear whether all nine officers present during the incident were placed on leave, those who were suspended will continue to receive full pay, according to USA Today.

Hundreds of protesters on the march this Monday afternoon in Rochester #RochesterPD#Rochester#NewYork#RochesterProtestspic.twitter.com/hbdc8SBgxn

Body camera footage of the encounter emerged on Monday, with the 1-minute video showing a distressed girl handcuffed in the back of a police car as officers attempt to subdue her. Through the girl’s sobs, a female officer is heard threatening to pepper spray the child if she doesn’t calm down, and proceeds to do so moments later. Police were reportedly responding to “family trouble” and a potentially stolen vehicle at the time, and claim the girl was handcuffed for her own “safety” and at the request of one of her parents.

The girl has since been released to her family, but the footage has kicked off a major bout of controversy, inflaming existing tensions between police and Rochester residents, many of whom are still up in arms over the killing of Daniel Prude. The 41-year-old African American man died last March after officers pinned him to the ground during a mental health crisis, where he eventually stopped breathing. His death has also stoked a series of protests.

After weathering hours of snowfall and below-freezing temperatures, the marchers dispersed later on Monday evening, seen leaving the police station in groups to minimize the chance of arrests on their way out.