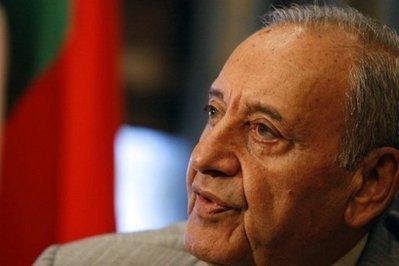 Speaker Nabih Berri escalated his stance regarding the formation of the new government after President Michel Aoun and Free Patriotic Movement chief Jebran Bassil rejected an initiative he made last week, a media report said on Monday.

“Berri met PM-designate Saad Hariri in Ain el-Tineh at the end of last week and proposed to him an initiative regarding the government,” al-Jadeed TV reported.

The initiative called on Aoun and Hariri to “agree on the ministerial candidates for three contentious portfolios: interior, justice and energy,” the TV network said.

Under the initiative, the president and the PM-designate were supposed to keep proposing names until they agree on consensual candidates in return for Aoun “giving up the demand of getting the one-third veto power for his party,” al-Jadeed added.

According to the TV network, Hariri accepted the initiative as Aoun and Bassil rejected it.

“Bassil rejected the proposal, clinging to the one-third blocking share, which torpedoed Berri’s initiative and infuriated him, prompting him to issue a statement revealing that his initiative had run into the blocking one-third obstacle,” al-Jadeed added.

“Berri and Hariri have become convinced that the president and his Movement are seeking to get a one-third share to block all junctures that require a two-thirds majority, such as reforms, appointments, the ministerial policy statement, the budget and other issues,” the TV network said.

A source close to both Berri and Hariri meanwhile told al-Jadeed that “Aoun condemned himself” through the statement that was issued Monday by the presidential palace since “Berri did not name him in his statement.”