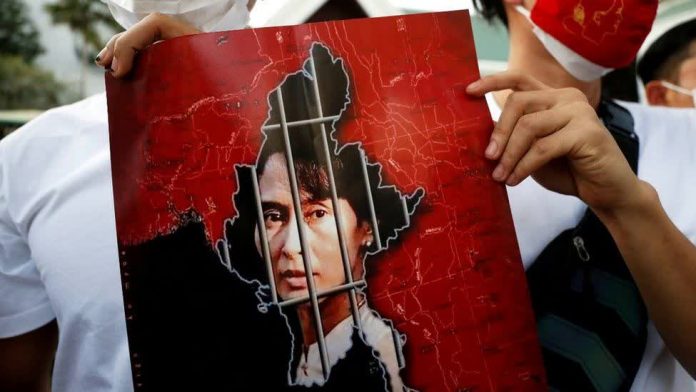 The military took power in the south-east Asian nation on Monday after arresting political leader Aung San Suu Kyi and hundreds of other lawmakers.

The coup leaders have since formed a supreme council which will sit above the cabinet.

In Myanmar’s biggest city Yangon though, signs of resistance and civil disobedience have been growing.

The United Nations Security Council met on Tuesday but failed to agree on a joint statement after China did not support it.

A joint statement would have needed China’s support which holds veto power as a permanent member of the (UN) Security Council.

Ahead of the talks, the UN’s Special Envoy on Myanmar Christine Schraner had strongly condemned the military takeover which came after the army refused to accept the outcome of general elections held in November.

She said it was clear that “the recent outcome of the election was a landslide victory” for Ms Suu Kyi’s party.

“Through this foreign policy equivalent of gaslighting, China seems to be signalling its tacit support, if not emphatic endorsement, for the generals’ actions,” Myanmar expert Elliott Prasse-Freeman, of the National University of Singapore, told the BBC.

“China seems to be proceeding as if this is Myanmar’s ‘internal issue’ in which what we are observing is a ‘cabinet reshuffle,’ as China’s state media put it.”

While he thinks a UN statement would not have made an immediate difference, it would still serve as “a first step for cohering an international response. That appears to not be forthcoming”.

Aung San Suu Kyi, who led the now-ousted elected government, has not been seen since she was detained by the military on Monday morning. Dozens of others also remain detained, including the President Win Myint.

Her National League for Democracy (NLD) demanded her immediate release on Tuesday. It has also called upon the military to accept the results of the November election, which saw the NLD win more than 80% of the votes.

Meanwhile, the United States said it had been unsuccessful in contacting the Myanmar military and has formally declared the takeover to be a coup d’etat. This means means the US cannot directly assist the government, though most of its assistance goes to non-governmental entities.

The EU, UK, Australia and others have also condemned the takeover.

Myanmar, also known as Burma, was ruled by the armed forces until 2011, when a nominally civilian government was sworn in.

What is the situation in Myanmar?

Power has been handed over to commander-in-chief Min Aung Hlaing. Eleven ministers and deputies, including those in finance, health, the interior and foreign affairs, were replaced.

In the first meeting of his cabinet on Tuesday, Min Aung Hlaing repeated that the takeover had been “inevitable”.

The country was calm in the aftermath of the coup, with troops patrolling all major cities and a night-time curfew in force.

Myanmar has a long history of military rule and many people can still remember the terror of previous coups.

But on Tuesday evening, car horns and the banging of cooking pots could be heard in the streets of Yangon in a sign of protest.

Staff at 70 hospitals and medical departments across the country have reportedly stopped working in protest against the coup and to push for Ms Suu Kyi’s release.

Some medics are also wearing symbols like black ribbons in silent protest.

Myanmar at a glance

Myanmar is a country of 54 million people in South East Asia which shares borders with Bangladesh, India, China, Thailand and Laos.

It was ruled by an oppressive military government from 1962 to 2011, leading to international condemnation and sanctions.

A government led by Ms Suu Kyi came to power after free elections in 2015. But a deadly military crackdown two years later on Rohingya Muslims sent hundreds of thousands fleeing to Bangladesh and triggered a rift between Ms Suu Kyi and the international community.

She has remained popular at home and her party won again by a landslide in the November 2020 election. But the military have now stepped in to take control once more.