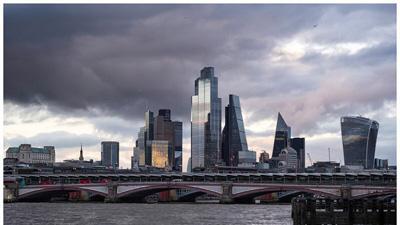 The UK’s economy continues to lag behind the US even though the former is supporting its population better and has lower levels of unemployment, an economist tells Sputnik. This is due to the greater levels of financial support granted to businesses in the North American country, at a time of low profitability within the private sector.

The International Monetary Fund’s (IMF) latest forecast sees the US and China – in the words of the FT – ‘to recover most strongly’ from COVID-19 and the policies (or lack thereof) implemented to tackle it. The fund projects that by 2022 their respective economies will only be 1.5 per cent smaller than they were projected to be before the pandemic. This is compared to other advanced economies which are expected to be at 2.5 per cent below the size they were projected to be at, before the pandemic.

Michael Roberts has worked as an economist with investment research firms in the City of London for over 30 years. Roberts, who authored The Great Recession: Profit cycles, economic crisis, says that China’s economy has performed the best, largely due to the differences between how it handled the novel coronavirus and supported the economy, compared to countries like US and UK. He also argues that governments must apply “direct investment in the economy such as infrastructure spending, reviving public health and education systems”, and not depend on the private sector.

Sputnik:Are you as sanguine as the IMF regarding the future of the US and Chinese economies?

Michael Roberts: Much depends on whether the COVID-19 pandemic subsides or continues intermittently to disrupt economic activity, mobility and trade and how quickly and effectively the rollout of vaccines are during this year. China actually expanded in 2020, the only major economy to do so. That’s because it suppressed the virus with drastic lockdowns and mass testing; and applied direct state investment in health.

In contrast, the US had sporadic lockdowns and testing but many states opted for keeping the economy going at the expense of lives. However, if the vaccines work in 2021, then by the end of 2022 we can expect a modest recovery in the US economy, especially if Biden’s fiscal stimulus is implemented.

But these are big ‘ifs’ and I suspect that the IMF forecast for the US recovery and less long term damage to the US economy will prove optimistic. It’s going to be a longer haul out than the IMF thinks.

Sputnik: Do you see policy positions that give you hope that meaningful improvements in peoples’ living standards and quality of life are around the corner?

Michael Roberts: The optimistic view is that many governments are willing to apply unprecedented fiscal support and stimulus programmes to tide people over and then expand the economy to help recovery. And governments are planning to do so without worrying about rising public debt for now – a change of policy from the post great recession approach.  Fiscal austerity is taking a back seat for a while.

However, the so-called global south governments are in no position to expand fiscal spending and are starved of funds, while facing significant foreign debt burdens without effective help from international agencies.  Unemployment and poverty levels are rising and will not be reversed any time soon, while vaccination rollout in the global south will be minimal.

All this indicates that only a small proportion of the world will see meaningful improvement this year and next.

Sputnik: How would you compare the UK economy, from the perspective of business as well as workers, to that of the US?

Michael Roberts: The UK economy has been hit by a double whammy. The COVID pandemic has led to highest cumulative death rate among major economies and the largest contraction in national output in the G7 [made up of Canada, France, Germany, Italy, Japan, the UK and the US]. Brexit has created serious disruption of trade with the UK’s largest trading partner, the EU and the prospect of lost investment and production down the road. Business investment will continue to decline, unemployment will rise and wages will stagnate.

This compares unfavourably with the us, where national output has not suffered so much and business investment is recovering along with a new administration pledged to fiscal stimulus. Of the G7 economies, the US is likely to perform the best over the next few years.

But that is not saying much as the G7 as a whole is likely to experience slower growth rates in output, employment and investment than even in the post great recession period.

Sputnik: Is there a reason, other than Brexit, why the US would be outperforming the UK economically, speaking given that there appeared to be far more generous worker and business provisions provided by the UK compared to the US (such as 80% salary coverage for furloughed workers, tax deferments, business grants and loans to SMEs)?

Michael Roberts: The US fiscal and monetary injections for business are much higher than in the UK, even if the UK govt is supporting the population better. US unemployment is higher than the UK. But that is also partly because of Brexit, because hundreds of thousands of EU citizens have left the UK during COVID, reducing the impact on unemployment.

Sputnik: What kind of economic policies do you think would best remedy the current problems faced by millions of people in the US and UK?

Michael Roberts: Governments need to take the lead and not rely on the private sector to engender recovery. The private sector is suffering from low profitability and even risk of bankruptcies in a sizeable section.

Governments must apply direct investment in the economy such as infrastructure spending, reviving public health and education systems. Where governments have intervened directly, as in the production capacity of vaccine production, that has brought speedy results. The same approach is needed in the wider economy.