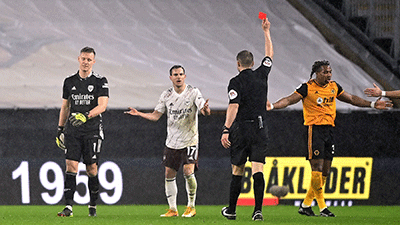 A review of Tuesday’s action in the Premier League, where Arsenal saw two sent off and Sheffield United beat West Brom.

The midfielder’s brilliant 30-yard drive sealed victory for the hosts, who cashed in on two red cards from the Gunners.

The visitors had total control after Nicolas Pepe’s opener, with Bukayo Saka shooting against a post and seeing a goal ruled out by VAR.

But the game turned in first-half stoppage time when Ruben Neves levelled from the spot after David Luiz was sent off for tripping Willian Jose.

Goalkeeper Bernd Leno was also dismissed in the second half for handling outside his area as the Gunners’ night went from bad to worse.

🔴 Arsenal are down to NINE men now! pic.twitter.com/JOjA2suvFa

Wolves earned just their second win in 12 games and first victory in nine.

Sheffield United came from behind to win 2-1 against fellow strugglers West Brom and keep alive their hopes of pulling off the greatest of escapes in the Premier League.

The bottom two clashed at a wet Bramall Lane on Tuesday night in a game that Blades boss Chris Wilder admitted was a must-win for his team, while Baggies boss Sam Allardyce said it was a “must-not-lose”.

It was Wilder who finished the evening the happier man after goals from Jayden Bogle and captain Billy Sharp overturned the half-time lead given to the visitors by Matty Phillips’ strike.

Who else but Billy Sharp? ⚔️

Sheffield United grab what could be a vital goal vs. West Brom and it’s their talismanic veteran who finds the back of the net!

He was just about to be subbed off! 😅 pic.twitter.com/albwTwum7A

It was only the Blades’ third Premier League win of the season. Wilder’s men remain bottom of the table but are only a point behind West Brom now, and 10 points from safety.

The victory also relieved United of the ignominy of getting a lower points total than the 11 Derby managed in their relegation campaign of 2007-08.

Manchester United equalled their Premier League record win as Southampton found themselves on the wrong end of a 9-0 scoreline once again.

Alexandre Jankewitz’s red card within 90 seconds of his first senior start for a terrible challenge on Scott McTominay made an uphill battle even tougher for injury-hit Saints.

It was a gut punch that meant it was a case of how many Southampton would concede on the way to their fourth consecutive league loss, with Jan Bednarek also sent off as United went on to win 9-0.

It was an unwanted repeat of the scoreline that Ralph Hasenhuttl’s men fell to against Leicester in October 2019 as United equalled their record Premier League win against Ipswich from 1995.

The victory moved United level on points with leaders Manchester City and dramatically cut the goal difference gap, with full debut Jankewitz’s red card from Mike Dean after 81 seconds making this a night to forget for Saints.

Gary Cahill marked his return with the decisive goal as Crystal Palace came from behind to win 2-1 at Newcastle and claim back-to-back Premier League victories for the first time since September.

The England defender struck with a 25th-minute header to seal an entertaining encounter at a wintry St James’ Park four minutes after Jairo Riedewald, who had also been named only among the substitutes against Wolves at the weekend, had blasted them level from 25 yards to cancel out Jonjo Shelvey’s early opener.

Palace were forced to weather a storm both on and off the pitch as Steve Bruce’s men, boosted by their win at Everton on Saturday, threw everything they had at the visitors in a decidedly open game, but although the Magpies dominated the second half, they were unable to find a way back into it.

Having seen his side set a fresh benchmark at Goodison Park on Saturday, Bruce demanded more of the same and got it within 71 seconds of kick-off.

Miguel Almiron ran on to Ryan Fraser’s back-header and lifted the ball over defender Scott Dann before crossing for Callum Wilson to control and then find Shelvey, who thumped a skidding shot past the helpless Vicente Guaita.