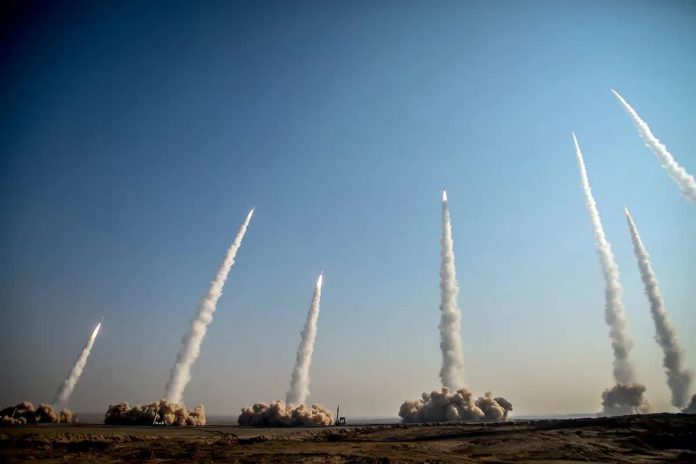 Iran’s Revolutionary Guard Corps’ official website shows a launch of missiles during a military drill in an unknown location in central Iran at the start of this year. Questions have been raised about the US ability to stop such an attack. Photo: AFP/Sepah News

The US needs a new start in air defense. Existing systems are not integrated, not layered and are mediocre to poor performers. Since the 1950s, the US has struggled for solutions to missile threats.

Because the army and the Pentagon keep trying to improve the one system they have instead of creating a real competitive environment, the future for US missile defense and US security seems bleak.

Today no US city and no US missile base in the US has protection against ICBMs or any other threat. In California at Vandenberg AF Base and Alaska at Ft Greely, the US deploys the Ground Based Midcourse Interceptor (a total of 44 interceptor missiles).

The missile has a spotty record of tests ( 11 of the 20 [55%] hit-to-kill intercept tests have succeeded) and the Air Force is looking for a replacement missile. GBI is exoatmospheric and uses “hit to kill” technology; it does not have an active warhead.

In the Air Force approach, GBI with a new interceptor missile will still be limited to rogue missiles from North Korea (GBI is not deployed to deal with Iran). Even though the ABM Treaty was canceled, there appears to be no interest at the Pentagon or Congress for a real ABM capability to protect US territory.

PAC-3 Patriot is generally regarded as the top US tactical ballistic missile defense system. It can launch different interceptor missiles. Patriot in the last few years has been observed in Saudi Arabia where the system has intercepted, or partially intercepted, Yemen-based Houthi-fired ballistic missiles (originating in Iran).

Patriot has also been used against cruise missiles. Overall, Patriot’s performance (PAC-2 and PAC-3) has been mixed. It intercepts missiles during the last moments of the flight trajectory and appears to have trouble distinguishing between missile bodies and missile warheads, particularly in new Iranian missiles where the warhead separates in the last seconds from the missile body.

Also, judging from shot down missile debris, the system can hit an incoming missile, but not fully destroy it.

The US does not have layered missile defenses – that is, tactical defense systems that can deal with threats that can include different kinds of ballistic missiles, cruise missiles, aircraft and even drones – including loitering munitions. The upshot is that the US has serious difficulty in being able to protect overseas US bases.

An example of what can happen was Operation Martyr Soleimani by Iran’s Islamic Revolutionary Guard Corps against two US bases in Iraq – Ayn al-Asad and Erbil – using ballistic missiles.

In all, 22 missiles were fired, 17 at the Ayn al-Asad base and 5 at Erbil. While there was some forewarning and US personnel were sheltered, the blast effects of the rockets caused 110 casualties – mainly in the form of serious concussions. The US had no air defenses of consequence at either base.

This is nothing new. US history in air defenses has been less than stellar.

On May 22, 1958, at Leonardo New Jersey at approximately 1:20 in the afternoon, eight Nike Ajax missiles at Leonardo Battery B, 526th Anti-Aircraft Missile Battalion, exploded, killing 10 men, six from the army and four civilians at the base.

Nike Ajax bases had been placed around the United States to guard against Soviet nuclear bombers, especially the Tu-95. Each Nike Ajax missile had three explosive warheads. The missiles had a slant range of about 30 miles, in the Leonardo Battery that was sufficient to provide good coverage of New York unless a bomber approached inland from the north.

Other Nike Ajax Battalions would protect the city from that direction.

But the Soviets quickly started building long-range intercontinental ballistic missiles, and Khruschev said the USSR was “grinding them out “like sausages,” it was said. These nuclear missiles could not be defended by Nike Ajax.

So when Leonardo Battery B’s eight missiles exploded, the base was preparing to soon install the Nike Hercules, to replace the Ajax. These had a longer range of 100 miles and differed from the Ajax in one critical respect: the warhead was a boosted nuclear fission (W-31) weapon with an explosive power of 20 kilotons (KT).

The bomb that destroyed Hiroshima was supposed to be 18 KT, but in fact it was closer to 16 KT. The idea of Nike Hercules was to destroy Russian missiles with radiation, not the nuclear blast itself.

The US planned a follow-on to the Nike Hercules (Nike-X) with more than double the range and an even bigger thermonuclear warhead. It was planned to protect US missile fields in the midwest. The program started in 1961, but was canceled in the Kennedy administration by Robert McNamara in 1963.

The cancellation has largely been explained for technical reasons, but in fact after the Cuban Missile Crisis Kennedy and Khrushchev had reached a deal that eventually led to various treaties including SALT 1 (discussions for the treaty started in 1967) and the now canceled Anti-Ballistic Missile Treaty (first proposed at the Glassboro, NJ Summit in 1967).

It is said the main motivator for the ABM Treaty was multiple-warhead ballistic missiles (later MIRV, Multiple Independently Targeted Reentry Vehicles) – in the Pentagon’s judgment there were too many warheads and decoys (also known as “penetration aids”) that would overwhelm any missile defense.

Instead of protecting cities, the Johnson and Nixon administrations turned to the idea of protecting US missile bases. Two programs were started – Sentinel in 1967, canceled in 1969, and Safeguard, a two-layer system.

There were two Safeguard sites, one in North Dakota and the other in Montana. In 1974, the US and USSR decided to reduce the ABM bases to one each, and the US only kept the North Dakota installation, but only for a year. Congress ordered it deactivated in 1975.

Today the US Army is working on an integrated tactical air defense system, but will rely on Patriot as the main tactical missile defense component.

There is no thought about replacing Patriot or balancing Patriot with other systems that can destroy tactical ballistic missiles such as the kind that crashed into Ayn al-Asad or Erbil. Having all the eggs in one basket is the Achilles heel of US defense programs.

Russia takes a significantly different approach and has many different air defense systems they say cover the spectrum of threat, ranging from the highly promoted S-400, the S-300, Pantsir, Tor, 9K31/9K32 Strela, Osa, Buk, Pecora and the forthcoming S-500.

All these systems are mobile and are supported by many different types of radars, passive and active. The Russians also deploy advanced jammers both to protect their air defenses and to destroy incoming threats where possible. Because today most precision-guided weapons use GPS – US, Russian, Chinese or European – they can be jammed or spoofed.

Israel has deliberately built a layered air defense system that can handle everything from short-range rockets, drones and cruise missiles to long-range intermediate-range ballistic missiles.

Among the Israeli systems are Iron Dome, David’s Sling, Arrow II and Arrow III. Israel also has Patriot, primarily for anti-aircraft use. One feature of Israel’s approach is an Air Defense Command, allowing it to coordinate its operations and optimize against a bevy of potential threats.

Although there is no defense system that can offer perfect protection, a layered system under a single command authority appears to be the best approach, even if the command authority is virtual and distributed to assure survival. Furthermore, there is no such thing as a purely defensive system. The attacker has to know that he will be attacked and pay a severe price.

The US, after the various failed or canceled programs of the 1950s and 1960s, needs to re-examine continental and expeditionary air defense. It can’t rely on a couple of systems (such as GBI or THAAD) to knock out an errant missile or halt a North Korean nuclear attack.

Put simply, the US systems are not thoroughly reliable even in this posture. Threats coming from near-peer adversaries (Russia, China) and from actors such as Iran, make clear that the US needs urgently to upgrade its thinking and open itself up to a variety of solutions to have credible air defenses to protect its territory, overseas bases and expeditionary forces.

US pastor on leave after Melania Trump ‘trophy wife’ comments