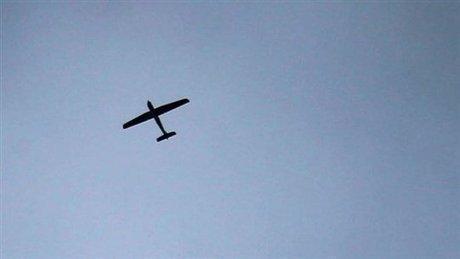 The Israeli army said anti-aircraft fire targeted one of its drones over south Lebanon on Wednesday, as Lebanese media reports said that Hizbullah fired a surface-to-air missile at the drone.

In a tweet, Israeli army spokesman Avichay Adraee said the unmanned drone was not hit by the missile and that it continued its “routine” mission.

Lebanese media outlets had earlier reported that a blast was heard in the southern regions of al-Zahrani and Nabatiyeh.

The frequency of low-flying warplanes over Beirut and other parts of Lebanon has intensified in the past weeks, making residents jittery.

Earlier in January, the Israeli army shot down an unmanned aircraft it said had entered its airspace from Lebanon.

In August 2020, Hizbullah also said it downed and seized an Israeli drone that flew into Lebanese airspace. Israel at the time said the drone had “fallen.”

Hizbullah had in September 2019 vowed to down Israeli drones overflying Lebanon following an incident a month earlier when two drones packed with explosives targeted Hizbullah’s stronghold in Beirut’s southern suburbs.

Israel and Hizbullah fought a monthlong war in 2006 that ended in a stalemate.

Israel accuses Hizbullah of violating the terms of a U.N. cease-fire and says its overflights are needed to keep an eye on the group. Lebanon has routinely complained to the U.N. about Israel’s daily violations of its airspace and mock raids around the country.

Israeli officials say Hizbullah has amassed a stockpile over some 150,000 rockets and missiles capable of striking anywhere in Israel. It also accuses the group of trying to develop and produce sophisticated precision-guided missiles.

Hizbullah leader Sayyed Hassan Nasrallah recently boasted that the group now has twice as many precision-guided missiles as it had a year ago. But he strongly denied Israeli claims about Hizbullah having factories to produce such missiles in Lebanon.

In a major policy address last week, Lt. Gen. Aviv Kohavi, Israel’s military commander, accused Hizbullah of storing its missiles in populated areas of Lebanon and said these areas will not be spared if war erupts.

He said residents would be given time to flee ahead of time, but “because these areas are flooded with rockets and missiles, they will be flooded with attacks by the Israeli army.”