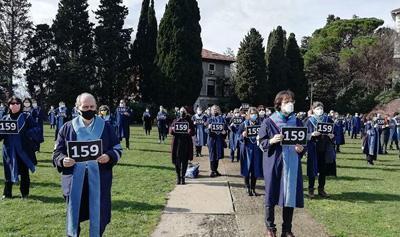 Melih Bulu, the newly appointed rector at Istanbul’s Boğaziçi University, said he will not step down following protests by the university students and academics.

Speaking to reporters, Bulu said he has no intentions to resign from his post and that he assumes that the crisis that started with his appointment will end in six months and that it will be so.

Students started protesting nearly a month ago, saying that the appointment of Bulu as rector was contrary to the customs of a 158-year-old university.

Turkish police on Feb. 1 intervened when a group of students was walking from the Etiler neighborhood to the south campus of the university.

Police intervened against students protesting on the university’s campus and detained 159 people.

Istanbul Governor’s Office stated on Feb. 2 that 98 students out of the detained have been released by the order of the Chief Public Prosecutor’s Office.

Some 10 people were also released in the evening on condition of judicial control, according to daily Milliyet.

Following reactions on social media, Turkey’s General Directorate of Security shared a Twitter post on Feb. 2, stating that the police in the video said that “walk down [the street],” not “look down.”

“Our police fight not only against illegal demonstrators but also with the fake [news] virus in a pandemic environment. Turkish police are always ready for this fight for our nation,” said in a video message by the directorate on Twitter.

Dozens of academics also protested the detentions by turning their back to the rector’s office and holding banners saying, “we will not look down” and “159,” which referred to the number of people detained.

Late on Feb. 2, police intervened with tear gas on a group gathered in the province of Istanbul’s Kadıköy district, a busy district located on the city’s Asian side, to support the protests of university students.

The group dispersed from the back streets and gathered again in the Mehmet Ayvalıtaş Park in Moda neighborhood while residents supported protesters with applause and whistles from their windows.

Some 104 people were detained during the protests in Kadıköy, Beşiktaş and Sarıyer districts, according to a statement made by the Istanbul Police Department.

Rector elections in Turkey were lifted in 2016 with the order of an emergency decree created and passed by the Turkish Council of Ministers.

Though candidate rectors were previously selected among the academics elected by faculty members and the students, the regulation allows for the selection to be done only by Higher Education Council (YÖK) members.

Meanwhile, a total of 51 people detained by police Monday during the demonstrations at the university’s South Campus were brought to the Istanbul Court of Justice in Çağlayan after the completion of procedures at the police station.

The questioning of the suspects in groups of six ended early in the morning.

The remaining 21 suspects were also released on bail on the same conditions.