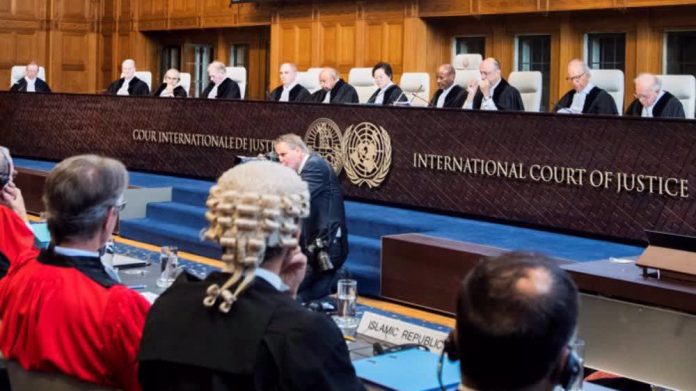 https://www.presstv.com-File photo shows a session of the International Court of Justice (ICJ).

“Another legal victory for Iran,” Zarif tweeted Wednesday, adding that the International Court of Justice (ICJ) “dismissed all US preliminary objections in the case brought by Iran over unlawful US sanctions.”

The @CIJ_ICJ just dismissed all US preliminary objections in the case brought by Iran over unlawful US sanctions.

Iran has always fully respected int’l law. High time for the US to live up to 𝙞𝙩𝙨 int’l obligations.

The court issued the ruling earlier in the day, unanimously refuting several of the jurisdiction-related objections that had been brought up by the US. Concerning the rest of the objections, Washington managed to secure only one favorable vote against 15 negative ones.

Zarif described Wednesday’s decision by the court as “another legal victory for Iran following 3 Oct. ’18 Order” by the ICJ.

“Iran has always fully respected int’l law. High time for the US to live up to its int’l obligations,” Zarif concluded.

Announcing the ICJ’s ruling, Foreign Ministry Spokesman Saeed Khatibzadeh said the decision against the US’s objections had helped advance Iran’s lawsuit. Now, the court’s addressing of the case would enter a new stage, he added.

As part of this new stage, he added, the court could also address Washington’s refusal so far to heed its October 3, 2018 ruling for it to suspend the sanctions.

The spokesman, meanwhile, said the Wednesday decision marked “the rightfulness of Iran’s demands.”

Tehran lodged a complaint against the US with the ICJ three years ago when former president Donald Trump withdrew the US from the landmark 2015 nuclear deal and restored the sanctions, saying Washington breached the Treaty of Amity and Economic Relations signed by the two countries in 1955.

Trump had abandoned the deal despite its multilateral nature and the fact that it has been endorsed as a UN Security Council resolution.

Iran brought the lawsuit before the ICJ in 2018, strongly protesting the strictly illegal nature of Washington’s withdrawal from the deal, which is officially known as the Joint Comprehensive Plan of Action (JCPOA).

In October that year, the Islamic Republic landed its first victory against the US in the case after the ICJ ruled that Washington had to suspend its sanctions on vital commodities and plane parts until the court reached its final decision.

Springing into action against Iran’s legal campaign, the US argued that the ICJ was unfit to rule in the matter since Washington had taken itself out of the court’s compulsory jurisdiction in 1986.

The ICJ, however, considers itself rightful to act against any given state’s preferences given the nature of the matter at hand.

The US had also contended that Trump’s secretary of state Mike Pompeo had annulled a Treaty of Amity between Washington and Iran’s former monarchical regime, thus preventing Tehran from launching a suit.

Tehran, however, reminded the court that it launched the lawsuit before Pompeo took the measure against the treaty.

Trump’s successor Joe Biden has voiced a willingness to return the US to the nuclear accord.

Iran says the United States’ potential return to the JCPOA could only be meaningful if Washington removed all of the oppressive sanctions it has imposed on the Iranian nation.