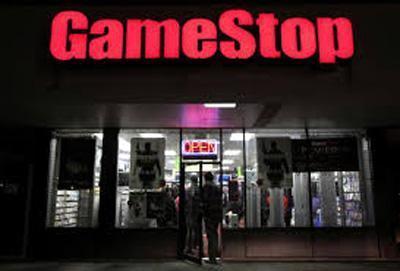 By Tom Westbrook, Sagarika Jaisinghani (Reuters) – Stocks at the heart of a recent social media-driven buying frenzy were subdued in early U.S. trading on Thursday, a possible signal that wild gyrations which roiled financial markets were fizzling out just as regulators meet to discuss the volatility. Shares of videogame retailer GameStop Corp were up 4.3% after losing 72% of their value on Monday and Tuesday combined. They closed up 2.7% at $92.41 on Wednesday. Cinema operator AMC Entertainment – another target of amateur investors on online forums such as Reddit’s WallStreetBets – rose 1.2% following a 15% jump a day earlier. The stock is still down about 56% from last week’s peak of $19.90. U.S. Treasury Secretary Janet Yellen will meet financial regulators on Thursday to discuss GameStop and the recent market volatility, the Department of Treasury said. Focus could fall on the online forums where mass buying of GameStop and AMC was discussed last week, and on the ever-larger role played by hedge funds in financial markets. “Any kind of market distortion by investors agreeing to cause the distortion goes against the smooth and transparent functioning of markets,” said Andrea Cicione, head of strategy at TS Lombard. “The reason this might not be covered by regulation yet is simply because it has never happened before. But now it might find its way into regulation in a more explicit way.” Yellen will meet with the heads of the U.S. Securities and Exchange Commission (SEC), Federal Reserve Board, Federal Reserve Bank of New York, and Commodity Futures Trading Commission. The SEC is reviewing social media posts for signs of potential fraud, Bloomberg News reported on Wednesday. Meanwhile, Tesla Inc Chief Executive Officer Elon Musk tweeted his support for cryptocurrency Dogecoin, sending its value surging more than 50%. Musk’s tweets about certain companies – including GameStop – and cryptocurrencies have sent their prices soaring in recent weeks. IS THE SQUEEZE OVER? Along with others targeted by the retail crowd, GameStop and AMC soared last week as buying triggered a “short squeeze,” and funds that had bet against the companies scrambled to close their positions by purchasing the stocks at high prices. Thursday posts on Reddit implored investors to hang on, although many analysts think the squeeze is probably over and broader market attention has begun to turn to the possible fallout. “The FOMO was too strong. Nothing to do but hold now,” wrote one user, who said he had bought in to GameStop shares at $370. Fee-free online broker Robinhood, which has been at the center of the phenomenon, has further relaxed trading restrictions on the hottest retail-trader stocks before U.S. markets open on Thursday. Traders can now buy as many as 500 GameStop shares, up from a limit of 100. The limit on AMC shares was set at 5,500 and buying limits on other stocks were removed. Robinhood had imposed the limits and has been raising billions of dollars in capital because clearing houses, which mediate stock-market trades, had demanded extra collateral. Futures tracking the benchmark S&P 500 edged higher on Thursday as volatility settled and attention returned to progress on a new U.S. fiscal stimulus bill. [MKTS/GLOB] “The retail frenzy that provided an unusual distraction over the last couple of weeks appears to have lost momentum,” said Craig Erlam, market analyst at OANDA Europe. “A comeback tour may be planned at some point in the not-too-distant future but whether it will be as effective, we’ll have to wait and see.” Reporting by Joice Alves in London, Aleksandra Michalska in New York, Tom Westbrook in Singapore and Sagarika Jaisinghani in Bengaluru; editing by Jason Neely, Larry King and Bernard Orr Our Standards: The Thomson Reuters Trust Principles. Reuters