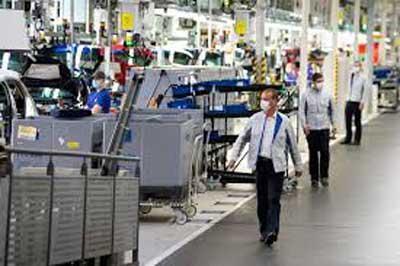 LONDON (Reuters) – Europe’s slow vaccine roll-out means its economic recovery could lag behind upturns in the United States and Asia unless it can get the programme back on track in the weeks ahead.

The International Monetary Fund last month hailed the strong China rebound and forecast that the U.S. and Japanese economies would return to pre-pandemic levels by the end of the year, but the euro zone won’t catch up until next year.

While President Joe Biden’s administration aims to provide even more stimulus in a $1.9 trillion U.S. package, EU capitals are still negotiating which projects will get funding from a 750 billion-euro joint recovery fund.

“It remains a race between mutations of the virus and the vaccination, and euro zone countries are lagging on the vaccination process, that’s for sure,” said Sylvain Broyer, chief economist EMEA at S&P Global Ratings.

Existing lockdowns in many countries are set to last into March and beyond. A German survey on Thursday showed that companies in the zone’s biggest economy expect restrictions of some kind to be in place until mid-September.

Much of the concern lies with the EU vaccination programme, launched with much fanfare on Dec. 27 but since struggling with slow rollouts and shortages of vaccine.

According to calculations by trade insurance group Euler Hermes, average daily vaccination rates across major EU economies stand at just 0.12% of the population – four times lower than in Britain and the United States.

EU countries have so far given first doses to about 3% of their populations, compared with 9% for the United States and 14% for Britain, according to Our World in Data.

Euler Hermes estimated that represented a five-week lag on the vaccination front. If left uncorrected, that would cost close to 90 billion euros in output this year, equivalent to two percentage points of lost quarterly GDP growth.

“Economies that finish the race first will be rewarded with strong positive multiplier effects supercharging consumption and investment activity in H2 2021, whereas vaccination laggardswill remain stuck in crisis mode and face substantial costs – economic as well as political,” it said in a note.

If Europe’s recovery is slow in coming, the risk is that it suffers more so-called “scarring”, or longer-term damage to its economy. A big concern is long-term and youth unemployment, which has only started improving in recent years after the 2008/09 financial crisis.

A delayed recovery could make things harder for the European Central Bank as it seeks to keep policy ultra-loose even as a stronger U.S. economy pushes up borrowing costs globally.

Signs of a disconnect are starting to play out in markets:U.S. 10-year Treasury yields are up 20 basis points so far thisyear. In contrast, Germany’s borrowing costs remaindeep in negative territory at -0.46% — a sign thatinvestors expect aggressive ECB stimulus for some time.

“If you get this outperformance of the U.S., you get morechatter about Fed tapering, pushing rates higher in the market,and making the ECB’s role harder,” said Jefferies Europeaneconomist Marchel Alexandrovich.

“Right now they (central banks) are all doing the same thing, but in 2022 there will be many more questions about policy divergence with the ECB still being more accommodative.”

On the plus side, some of the policy choices made in Europe mean the continent should see less of an overall lag emerging from the virus-induced recession than it saw after the 2008/09 financial crisis.

While European governments cannot match the stimulus put in place by the United States – packages already approved there provide support worth a colossal 19% of U.S. GDP – eurozone fiscal and monetary stimulus has been aggressive.

Furlough schemes have meant most euro economies ended 2020 in better shape than expected, while pent-up demand from the lock-downs could still deliver a powerful boost to growth later this year.

Berenberg analysts predict the euro area will take roughlynine quarters to return to pre-pandemic levels and the UnitedStates six quarters – a lesser divergence than that after 2008/09, when the euro zone economy took seven years to recover its losses and the United States bounced back in just three and a half years.

If EU capitals use resources from the EU’s 750 billion-euro joint recovery fund to address weaknesses in their economies, the hope is that future divergences will be smaller. But Europe’s patchy reform record means that is far from a given.

“If we manage to use this big pot of money to get somecountries to do the necessary adjustments and reforms andinvestment they need to tap long-term potential, then thisrecovery fund would have served a very good purpose,” said Christian Odendahl of the Centre for European Reform think tank.

“But if the implementation of that recovery fund is weak — and there is a risk that it might be, because spending that muchmoney quickly and well is difficult — then we may have squandered that opportunity.”

Additional reporting by Leigh Thomas in Paris and Howard Schneider in Washington; editing by Mark John and Larry King