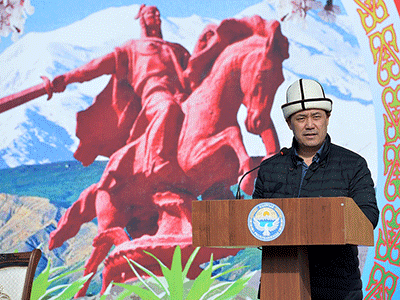 The new constitution promises the president vast new powers. It is being drafted with minimal public scrutiny.

Japarov has decreed that the media must promote “the values of traditional society” and “love for the homeland.” (government handout)
Kyrgyzstan under President Sadyr Japarov is promising not just a return to strongman rule, but also the aggressive promotion of hazy notions of traditional values and patriotism.

Activists are alarmed that much of this is happening with a minimum of public scrutiny and that basic freedoms are now at risk.

The new-look constitution is the main method by which this objective is being pursued. Voters elected in a January 10 referendum, held alongside the polls that sealed Japarov’s hold on power, to approve a return to super-presidentialism. That will end an uneasy 10-year experiment of a mixed presidential-parliamentary rule that only ever existed on paper.

Constitution drafters allied to Japarov have duly rustled up a document that will be put to yet another referendum later this year. Few have had access to the draft text. Its authors say the public can wait.

What is known about the draft is what has been divulged by Bekbosun Borubashev, the chairman of the constitutional convention overseeing the whole process.

One headline detail is the downsizing of the single-chamber parliament, which will go from having 120 members to 90. The solution for mitigating the potential curtailing in popular representation is the formation of a national kurultai. The elevation of this traditional forum would see groups of ostensibly representative members of the public gather to agree on policy proposals.

The president will accordingly acquire far more powers to determine the fundaments of domestic and foreign policy.

Borubashev has contended, however, that this expansion of presidential powers will be offset by a broadening of the grounds for initiating impeachment procedures against the head of state.

“We have added a provision stating that if [the president] violates the law and interferes in the work of the other branches of power, this will serve as grounds for their dismissal,” he has said.

Another bold change will be the scrapping of the role of prime minister, who will be replaced a figure known as the toraga, who will have the twin task of serving as head of government and of the presidential administration. The argument for this reform is that it will enhance accountability.

“One person, [the toraga], will be in two positions at once. This is due to the fact that we are moving towards a presidential form of government and [the president] must be answerable together with his administration,” Borubashev said.

The public’s input on all this is not being welcomed for now.

“I know that some people are outraged, because we are supposedly not showing them the draft constitution,” Borubashev told Vesti news website. “But we only have a draft so far, why show it? The convention is still actively discussing the new constitution. As soon as we are finished, the document will be made public.”

Constitutional law expert Saniya Toktogaziyeva is suspicious about all the secrecy, however. Toktogaziyeva says her sneak-peek at a leaked copy of the draft belies all the talk of accountability.

As for impeachment, the picture is more complicated than what Borubashev indicated, Toktogaziyeva said. Under the current constitution, forcing out a president requires only a decision from the General Prosecutor’s Office and an impeachment vote in parliament – itself a highly unlikely scenario under existing conditions.

Under the terms of the draft constitution, both the General Prosecutor’s Office and the Constitutional Chamber would need to weigh in. The heads of both those bodies would be presidential appointees.

“It would be almost impossible to remove [the president] from office. The impeachment procedure would become more complicated. Parliament is to be left with minimal levers of influence, like passing laws. The agenda and what laws are to be adopted will be decided by the president,” Toktogaziyeva said.

If the constitution-to-be reflects what may become the letter of the law under Japarov, what about its spirit?

Japarov’s first proclamations after being sworn into office on January 28 offer some insights.

Some were largely anodyne orders for the government to help support entrepreneurs and enhance protections for labor migrants.

Another decree was a ban on foreign companies being allowed in future to develop large mining projects – a symbolic sop to the nationalist crowd that constitutes the hardcore of Japarov’s base. Since there are next to zero untapped and large raw material reserves still remaining out there, however, this is largely theater.

A possibly more consequential proclamation from Japarov instructed the Education Ministry to insert the teaching of spiritual, moral and family values into the national syllabus. The decree also urged the government “to increase the civil-patriotic education of the younger generation by means of physical culture and sports.” A concept document on this decree is to be drawn up by June 1.

It is not only children that are to be inculcated with state-directed morality. Japarov’s decree has instructed the media to promote “the values of traditional society, the ideals of the family, a healthy lifestyle, love for the homeland and service to the people.” Journalists will be required to “promote a positive image of the country internationally.”

“If lawmakers write in broad terms, there will be no specificity, and then there may be abuses in order to suppress freedom of speech,” Isayeva said.