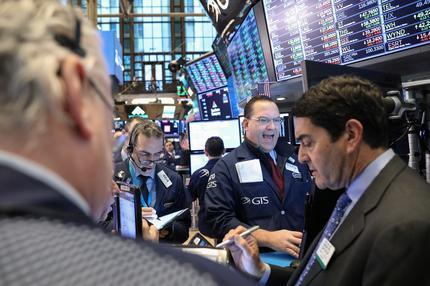 (Reuters) – Futures tracking the S&P 500 and the Nasdaq hit record highs on Friday as investors expected the pivotal jobs report to confirm worst of the labor market turmoil was behind, while progress towards more economic stimulus also bolstered sentiment.

The report, however, would not lessen the need for additional relief money from the government as long-term unemployment was likely becoming entrenched.

President Joe Biden’s drive to enact a $1.9 trillion coronavirus aid bill gained momentum early on Friday as the U.S. Senate narrowly approved a budget plan allowing the passage of the legislation in coming weeks with or without Republican support.

The S&P 500 and the Nasdaq are set to wrap up their best week since the U.S. election in early November as upbeat earnings and economic data boosted optimism about a speedy recovery while a retail trading frenzy appeared to fade following a bout of market volatility last week.

Stronger-than-expected corporate results so far in the fourth quarter have driven up analysts’ expectations, and S&P 500 companies are now on track to post earnings growth for the quarter instead of a decline as initially expected.

Johnson & Johnson rose 2.2% after the drugmaker said it had asked U.S. health regulators to authorize its single-dose COVID-19 vaccine for emergency use, and it would apply to European authorities in coming weeks.

Snapchat owner Snap Inc dropped about 7% after it warned that upcoming privacy changes by Apple Inc could hurt its ad business.

Shares of videogame retailer GameStop Corp, which has shed more than 80% of their value this week, were up 8% at $58.

Reporting by Devik Jain and Medha Singh in Bengaluru; Editing by Maju Samuel