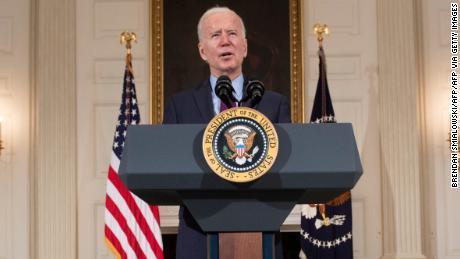 (CNN) Nearly three weeks into office, President Joe Biden is trying to do what he knows how to do best — connect with average Americans, letting them know he understands their suffering and offering words of comfort. But instead of doing so quietly on the campaign trail, he’s now using those skills to win a different kind of campaign — to sell his massive Covid-19 relief package to the American people.

In the first installment of a series of weekly addresses to the American people, released by the White House Saturday, Biden’s team filmed him calling Michele, a woman from Roseville, California, who lost her job because of the pandemic. He promised that his economic plan is intended to help restore the loss of dignity and purpose that she and so many others have felt over the past year.
Biden hasn’t made headway with his initial efforts to win bipartisan support for his $1.9 trillion Covid-19 relief package, so he is taking his case directly to the voters — connecting with Americans one at a time as he uses their stories to drive his policy agenda.
The clips of the conversation — which the White House framed as a modern-day version of former President Franklin D. Roosevelt’s fireside chats — were brief, tightly-edited and organized around Biden’s longstanding campaign theme that many Americans derive their dignity and self-worth from their jobs.
On the campaign trail last year and as Barack Obama’s running mate, Biden sought an emotional connection with voters by telling the story countless times of what he learned from his own father’s struggle to find steady work. He has often reflected on the isolation and self-doubt that can come from losing a job. As often, he has highlighted the lesson his father taught him — that success can also be measured by one’s resilience, getting back up after being knocked down.
In Biden’s conversation with Michele, he sought to convey his empathy for the economic struggles many Americans are facing as the driving motivation behind the relief legislation — which he views not just as an effort to power economic growth numbers, but also to help restore a sense of pride and purpose for Americans who have lost some of the 9.9 million jobs that have disappeared since last February.
The video was also intended as a reminder that there are real people still suffering economically across the country who are far removed from partisan bickering in Washington over the deficit and the details of what will drive the economic recovery.
“I’ve been saying a long time — the idea that we think we can keep businesses open and moving and thriving without dealing with this pandemic is just a nonstarter,” Biden told Michele. “We’re putting together a plan that provides for emergency relief to people who are in desperate need now.”
The President is expected to touch on those same themes in an interview on “CBS Evening News with Norah O’Donnell” that will be broadcast Sunday ahead of the Superbowl, giving him a chance to connect with a huge audience as lawmakers in Washington begin work on the economic proposals he laid out during his first few days as President. He and first lady Jill Biden have also taped a video message thanking health care workers that will be shown before the game, according to a source familiar with the plans.
In a clip of the interview released by CBS Saturday night, Biden became emotional when discussing another touchpoint that has made him relatable to many American families — his son Hunter’s struggles with substance abuse, which the younger Biden explores in a memoir that will be released April 6.
“I’ll bet there’s not a family you know that doesn’t have somebody in their family that had a drug problem or an alcohol problem,” Biden told O’Donnell in the clip. “The honesty with which he stepped forward and talked about the problem…. It gave me hope reading it. I mean, it was like — my boy’s back. You know what I mean?” Biden said, becoming emotional as he discussed his son’s project. “Anyway, I’m sorry to get so personal.”

Biden’s effort to convince the American people to get behind his economic proposal — which includes $1,400 stimulus checks for some Americans, an extension of unemployment benefits, as well as aid for small businesses and those facing hunger and eviction — will coincide with the impeachment trial of former President Donald Trump next week, a spectacle that will further distract from the pressing economic troubles of American families.
On Friday, both chambers of Congress approved a budget resolution that lays the groundwork for Democrats to be able to approve Biden’s proposal on a party-line vote. House Speaker Nancy Pelosi said in a Friday letter to her colleagues that they would spend the next week writing the legislation “to create a path to final passage for the Biden American Rescue Plan, so that we can finish our work before the end of February.”
Though Biden was elected on the promise that he could persuade Republicans to work with him— and he continues to say that he hopes to build bipartisan support for the bill — he showed a flash of impatience Friday when explaining why he was pressing ahead without waiting for GOP support. He pointed to the weak January jobs report, which showed that the US economy added only 49,000 jobs last month, and noted that it was also the single deadliest month of the pandemic with nearly 100,000 deaths.
“I know some in Congress think we’ve already done enough to deal with the crisis in the country. Others think that things are getting better and we can afford to sit back and either do a little or do nothing at all. That’s not what I see,” he said Friday, arguing that “a lot of folks (are) reaching the breaking point.”
Noting that he has met with Republicans and hoped to be moving ahead with their support, he added, “They’re just not willing to go as far as I think we have to go.”
“If I have to choose between getting help right now to Americans who are hurting so badly and getting bogged down in a lengthy negotiation,” he said, “that’s an easy choice. I’m going to help the American people who are hurting now.”
But in an excerpt of the CBS interview released Friday night, Biden said he does not believe he will be able to raise the minimum wage to $15 an hour through his relief proposal due to the Senate’s rules.
As the legislative work — which could stretch over the next month or longer — gets under way, the bipartisan group of House lawmakers known as the Problem Solvers Caucus is advocating for quicker passage of a $160 billion package focused exclusively on vaccine distribution as a more efficient way to get money where it’s needed most.
Rep. Tom Reed, a New York Republican who co-chairs the group, said in a statement Friday that “we simply do not have time to spare when the lives of the American people are at stake as new variants of the virus are emerging daily.”
“For the sake of protecting the lives of our fellow Americans, we must unite and act now in support of vaccines,” Reed said. “By quickly increasing federal funding for testing, vaccine distribution, and other key initiatives, we can get more shots in arms, safely reopen our economy, and finally defeat this virus.”
But Pennsylvania Sen. Bob Casey, a Democrat, rejected the idea Saturday, arguing that would “slow the train down of getting something done.”
“We’re not going to hide behind some limited bill,” Casey told CNN’s Ana Cabrera on “Newsroom” Saturday. “We’ve got to get the whole bill out the door. … We’ve got to get this bill done no later than the early part of mid-March.”