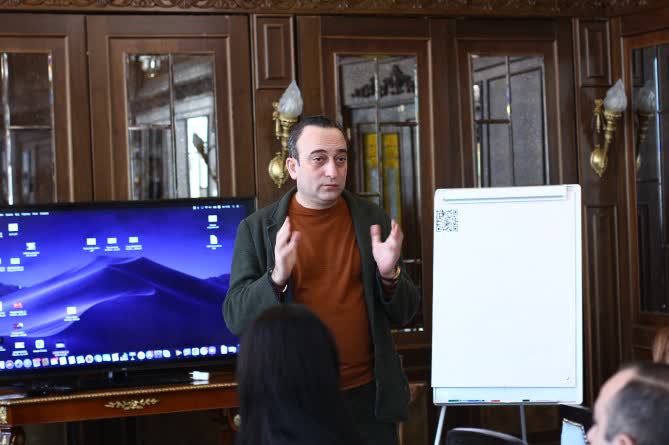 YEREVAN, February 8. /ARKA/. A new project or rather, а laboratory of projects called “301: Country of Wise Men” is starting in Armenia. And the first wise man who moved to Armenia within the framework of this initiative is Peter Nemoy. According to one of his hypotheses, Armenia can become a country of wise men and a keeper of world history.

Entrepreneur and philanthropist, co-founder of the Friends charitable foundation Gor Nahapetyan has also joined the project. In an exclusive interview with ARKA news agency, he elaborates one of the hypothesis about the future of Armenia, currently discussed inside the laboratory.

ARKA – Mr. Nahapetyan, a new project called “301: Country of Wise Men” has been launched in Armenia. Why did you decide to join it and become part of this story?

G. Nahapetyan – There are three questions to which I have no answers. But without answers to them, it is impossible to move forward into the future, and, moreover, these questions must be answered every day. I would like to tell a joke. The rabbi goes to the synagogue and on the way he is stopped by a young soldier, who points his rifle at him and says: “Halt! Who are you? Where are you going?” The rabbi looks closely at the young man and asks: “How much do you get paid?” The soldier replies: “10 shekels a day.” To which the rabbi says: “I will pay you one hundred shekels a day if you ask me these two questions every day at this same place.” And I have three questions. Who are we? Where are we going? And who are we going with? I have joined this project because I want to find answers to these questions.

ARKA – Why 301? Is this an association with the year when Armenia embraced Christianity as its state religion?

G. Nahapetyan – Perhaps. For example, some project participants see the year 301 like this: 3 is the Holy Trinity, and 01 is the beginning of the digital world. There can be many versions. Everyone can have their own. You can also draw parallels with the story of the progenitor of the Armenians, Hayk, who opposed Bel (the tyrant of Mesopotamia) and, leaving Babylon, went with his clan (about 300 men with their families) to the north, where he settled in the country of Ararat. We want another 300 wise men from different countries to move to Armenia. The first of them – Petr Nemoy – is already here; there are 300 left. (Petr Nemoy is a business consultant, an expert in the field of innovative creative technologies, a developer of copyright educational programs in the field of management strategy for top managers and business owners. – Ed.).

ARKA – Let’s say all 300 wise men have moved to Armenia. Do you think that that will work?

G. Nahapetyan – I think that one thing will definitely work – 300 wise people who have moved to live in Armenia will have a strong influence on enlightenment. I am sure that they will definitely introduce us and you to ourselves and help us find answers to those three questions. They will also help us understand why the world needs us, and why the world should protect us.

ARKA – Who are these wise men?

G. Nahapetyan – For example, in India there is the concept of varna (four main classes of ancient Indian society): sudras – servants, hired workers; vaisyas – farmers, artisans, merchants; kshatriyas – influential warriors. Kshatriyas were usually elected kings and brahmins – the oldest varna, which comprised priests, scientists, devotees. Everyone turned to brahmins- the sages – for advice and meanings. After all, what are the wise men doing? They communicate. Petr Nemoy has been in Armenia for less than a month, but he already knows a large number of people, and to my surprise on this visit, he introduced me to the Armenians I did not know. People come to him for ideas, appreciate him for his curiosity and ability to listen, most importantly, for his ability to pull out the main meanings and arrange them simply and clearly.

When the meanings are lost, then wise men are needed. And when there is meaning , merchants and workers come to the forefront who create businesses, warriors and kings appear who understand the meaning of what they are fighting for and what they are building. We have a country of lost wisdom, that is, we have it, but it must be awakened so that Armenians can begin to communicate and hear each other. So, Petr introduces me to the Armenians and the Armenians to the Armenians themselves. Because when they come here, they begin to bite into culture, history, pull out a lot of interesting people who have some meanings, they highlight them and pull them out. We Armenians, we tell each other little and hear little. But when a foreigner arrives, and even a sage, then we begin to open up.

ARKA – That is, they provide us with opportunity to look at ourselves from the outside and hear each other?

ARKA – Don’t you think that the war in Artsakh proved that the world does not need us?

G. Nahapetyan – We are not needed now. The world only protects itself. What we need to do to become part of the world? Then the world will protect us as it protects itself. We must pull out the meanings that are embedded in the depths, find new ones.

ARKA – Don’t you think that in the world now everyone is for himself, protects only himself and his interests?

G. Nahapetyan – It seems to me that not only in Armenia, but throughout the world there are processes of searching for new models of management, relationships, economic models, value and spiritual guidelines. Basically, the whole world is now in the process of a great rethinking. Therefore, if we manage to become an experimental platform where we can find answers to new challenges, then the whole world will be watching with interest. After the last events, it seems to me, we played three of Borges’ four plots. The first plot – we sit, waiting for the Messiah, the second – we strengthen the city against the enemy, the third plot – God died. The fourth remaining one is about the search: we go there, we don’t know where.

When a church in Tbilisi was being restored, frescoes suddenly appeared from under several layers of plaster and the face of Christ was revealed. We need to remove these layers in order to find ourselves anew. Not so long ago I learned that there is a procedure for returning to the bosom of the Armenian church. If, for example, you were baptized as a child, and then you wandered and changed your religion, and then decided to return to the bosom of the church, ou cannot be baptized a second time. Therefore, there is a special rite of return to the bosom of the church. It seems to me that we all need to go through this procedure and get back to basics. I will not tire of repeating these three questions. The first question is who are we? The second question is where are we going? And the third – with whom? With sages from all over the world, perhaps we can find answers to these questions.

ARKA – We realized who we are, but how to understand – where are we going?

G. Nahapetyan – There are several hypotheses for discussion. Can we become a country-keeper of the cultures of peoples who have lost their statehood? Can we give Assyrians, Udins, Talysh, Yezidis and other peoples the opportunity to develop their cultural and educational centers on the territory of Armenia? In essence, make Armenia a big Matenadaran (depository of old manuscripts in Yerevan). Can Armenia become a country of wise men, where people who have lost the meaning of life and are going through a midlife crisis will come to re-find themselves? Can we teach the world to survive and find new strength for life, because in our history we have done this more than once. Can we become the world’s first virtual network state (“Armenian World”) and unite all Armenians and not only? Can we become a land of humor, because this is one of the traits of wise men, because we must be able to fight not only with weapons, but also with words. Can we build a country with developed creanomics and sensonomics? Can we become standards not only for other cultures, but also for our own?

ARKA – The third question – with whom? Geopoliticians offer Armenia two ways in the current situation – either with Russia or with Turkey.

G. Nahapetyan – I am not a geopolitician, I don’t know how events in the region will unfold, how Turkey and Russia will develop. We need to think about our ontological security. It is difficult to attack the keeper of world cultures and the land of humor. How do we place the “red flags”? Because there are a lot of animals in the forest, but only wolves cannot cross them over. Our security is not only in weapons, but, first of all, in education.

G. Nahapetyan – There are unclosed gestalts that need to be closed. Including, the gestalt of the last war that is not closed. The winning side paraded and closed, we did nothing. Even the memory of the victims could not be properly honored. You can, for example, arrange a large 24-hour prayer service – from dawn to dawn, 12 hours to pray for the dead, and 12 hours – for the future and for the world. This will become the point, the closing of the gestalt and the new beginning. When something tragic happens, there are four stages of grief and, first of all, you need to go through the stage of denial. We must accept what happened and move on. I repeat once again, we need to decide what unites us as a nation and where we are going. If we do this, everyone will begin to act, not be sad.

ARKA – For 100 years after the Genocide, we were unable to overcome the victim complex, then we were a victorious nation for 30 years, and today what a nation are we?

G. Nahapetyan – Are we a nation? A nation is one thing. There are Lebanese Armenians, Syrian, Iranian, Georgian Armenians; inside we still divide ourselves into Karabakh and Gyumri Armenians. And what is common between us, what unites us? If we find this and strengthen it, we will begin and will be able to build what we can put next to the word “nation” .

ARKA – You think that there should be a soul in everything. Is there a soul in Armenia?

G. Nahapetyan – Yes. There is something in the atmosphere here. People change here, find something of their own and want to return here. At the same time, I believe that we are the most inhospitable nation, but I want to change this by inviting wise men here. Hospitality is not about taking guests to tourist places and treating to our fantastic Armenian cuisine. Hospitality is when non-Armenians can achieve something in our country, to rise to a government official, create families. The first gesture of hospitality will be how we will welcome these wise men and whether we can jointly fund their residences, donating each $301.

ARKA – Several years ago you said that with your soul you were in Armenia, and with your heart you were in Russia. Is this still the case?