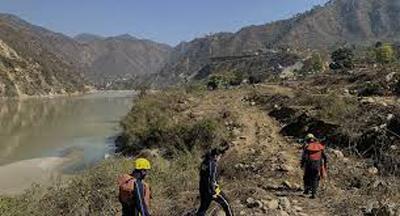 It was a warm and sunny Sunday on 7 February in India when news of a severe catastrophe in the Himalayan state of Uttarakhand disrupted the weekend stillness. The Nanda Devi glacier by the Dhauliganga River burst near the state’s Chamoli district, causing a major flood. The overflowing river mercilessly washed away everything in its way.

Almost 24 hours after a flood jolted Uttarakhand into high alert, the massive scale of the destruction in the region became clearer on Monday.

Around 170 people from the region are reported missing as of now, while 15 dead bodies have been recovered by rescue teams.

In addition to the Rishi Ganga dam project collapsing due to the floods, five important bridges that connected the mountainous areas of the region to one another are left damaged and virtually unusable.

Surrounded by several mountain peaks, these bridges connected 13 hilly villages, whose residents are totally cut off from the low-lying lands and are surviving on food packets being dropped off from choppers.

The flood has also disrupted all electricity and network towers in the villages, and the residents have nothing left to do but wait for the state and central government to make further decisions regarding their re-location or the restoration of connectivity.

A glacier burst 24 kms from Joshimath in Chamoli district led to this. A dam has been breached by Rishi Ganga river, several bridges damaged.Let us keep praying. #Uttarakhand pic.twitter.com/VpeAyCUtDw

This is scary. Prayers for Uttarakhand. 🙏🏻 I hope pic.twitter.com/X0bDCUm2RM

​Officers from the Indo-Tibetan Border Police (ITBP) were among the first to reach the flood-affected area to charge up rescue operations.

Currently, members of the ITBP are working on clearing up two blocked and damaged tunnels that were part of a power project in Uttarakhand’s Tapovan region.

Vivek Pandey, a spokesperson for the ITBP, told the media that 12 people have been rescued so far from the 900-metre-long tunnel two, while 30 people are still trapped in tunnel one.

Congratulations ITBP personnels for their commendable passion towards the service of the nation.
Evacuation of labourers from the Tapovan Tunnel is fantastic job. Let us salute them. Jai Hind.#Uttarakhand @narendramodi @JPNadda @PavanRanaRSS @jairamthakurbjp @blsanthosh pic.twitter.com/mJXA9US7o3

More than 100 labours at Barage and 50 plus in tunnel lost their life as per the site incharge of TAPOVAN NTPC work site. 3 Bridges at Reni village including 1 big bride of BRO. 2 Dead bodies recovered at Tapovan NTPC site. #uttrakhand #Chamoli pic.twitter.com/sm6ncJOOik pic.twitter.com/MUkKL1BvGC

​Trivendra Singh Rawat, the state chief of Uttarakhand, has been flying over the flood-affected region in a helicopter to monitor the situation.

The 82-kilometre-long Dhauliganga River is one of the six source streams of the Ganges River, which is considered the most sacred water source in India, emerging from the mighty Himalayas. After completing its course, the Dhauliganga River flows into the main Ganges with its other tributaries.

While the water level in the Ganges has risen, the flow situation is under control.

Hindu monks, who have been staging fast-unto-death protests against the “unhindered” construction activity on the upper reaches of the Ganges River in the holy state of Uttarakhand, have blamed the glacial burst on the government-backed construction of hydroelectric power projects.