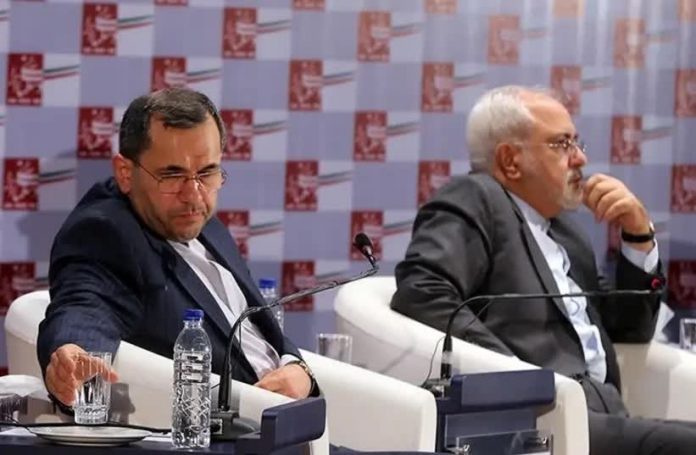 In a letter addressed to UN Secretary-General Antonio Guterres, Iran’s representative to the UN noted a recent speech given by IDF Chief of Staff Aviv Kochavi.

Majid Takht Ravanchi (L) with Mohammad Javad Zarif (R), Iran’s Foreign Minister, in 2015
(photo credit: TASNIM NEWS AGENCY/WIKIMEDIA COMMONS)
Iran has reportedly submitted a complaint to the United Nations over alleged Israeli threats made against the Muslim state and called on the intergovernmental organization to respond accordingly, Al Jazeera reported Sunday.
The letter, addressed to UN Secretary-General Antonio Guterres, noted a recent speech given by IDF Chief-of-Staff Lt.-Gen. Aviv Kochavi during the annual Institute for National Security Studies (INSS) conference in January, during which Kochavi indicated that the IDF is preparing several military operations in response to Iran developing its nuclear program.
“I have directed the IDF to prepare a few operative plans, in addition to what they have already, and we are working on those plans and developing them,” Kochavi said at the time.
Iran’s UN representative Majid Takht-Ravanchi noted that such statement violates the second article of the UN charter and called on the international community to respond immediately.
The specific clause referred to by the Iranian official is clause 4, which reads: “All Members shall refrain in their international relations from the threat or use of force against the territorial integrity or political independence of any state, or in any other manner inconsistent with the Purposes of the United Nations.”
Takht-Ravanchi added that Israel holds “destabilizing and warmongering policies” and stated that it should be dealt with by the international community.
He added that the alleged threats should be taken seriously especially considering Israel’s history of attacking other nations in the region, and submitted a request for the letter to be registered as a formal document in the UN’s Security Council.
Kochavi’s speech that is mentioned in Takht-Ravanchi’s letter addressed the Iran Nuclear Deal as a whole and was meant to signal President Joe Biden that the Israeli top military echelon is completely in line with Netanyahu on the subject, unlike his predecessor, Gadi Eizenkot, who often questioned Netanyahu’s position in regard to the Iran and to the deal.
“Going back to the Iran deal from 2015, or even to a similar deal with a few improvements, is a bad, wrong thing. It is bad operationally and strategically,” Kochavi said at the time. “Anything that is similar to the current deal is a bad thing, and we cannot allow it,” he added.

Herb Keinon contributed to this report.