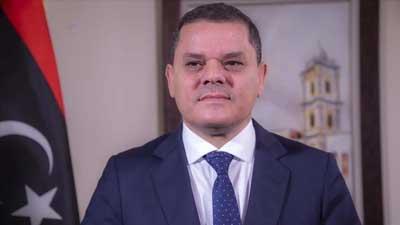 Dbeibeh’s remarks came in an exclusive interview with Anadolu Agency, his first interview ever after being elected to lead an interim government.

On Friday, Libya’s rival political groups agreed to form an interim unity government after five days of talks in Switzerland. Mohammad Younes Menfi was elected to head the Presidency Council of an interim government and Dbeibeh as its prime minister. Mossa Al-Koni and Abdullah Hussein Al-Lafi were also voted on the three-strong Presidency Council.

“My government will work to establish peace in Libya and solve the major problems facing the country,” Dbeibeh told Anadolu Agency.

He said the election of an interim authority in Libya by the Political Dialogue Forum “would serve the best of Libya and its people.”

“The 74-member forum was made up of members representing all regions in Libya. It represents all geographical regions, tribes, and all segments of the Libyan people,” he said.

Dbeibeh said the new Libyan government would be formed after three weeks before being put for a vote of confidence by the Libyan Parliament.

“There will be a fair representation of all segments of the Libyan people and all regions, but the focus will be on [achieving] the technocrat goals,” he said.

Asked about the possibility of reappointing former government members in his interim government, Dbeibeh said, “This is possible. The government will be technocrat and whoever has proved his efficiency will be among the government team”.

In the interview with Anadolu Agency, Dbeibeh listed several priorities for his interim government.

“One of the priorities will be combating the coronavirus pandemic,” the prime minister said. “We will exert our utmost efforts to obtain the vaccine and vaccinate the Libyan people.”

Dbeibeh continued, “We will also take care of daily-life difficulties such as power outage, health and daily obstacles. We will also consider [the formation of] reconciliation committees and mull the idea of drafting a constitution with the Presidency Council.”

The newly-elected premier underlined the importance of establishing social peace to help solve the Libyan crisis.

“We will form Libyan-Libyan reconciliation committees to reconcile between the people, the tribes and the warring sects,” he said.

“These sects will meet and we will prepare a budget to heal the rift and bridge the gap this year. We will work to bring the different viewpoints closer to hold the elections without violence, war, or sensitivities between cities.”

Ties with the eastern region

On Saturday, the eastern Libya-based government of Abdullah al-Thani, allied with warlord Khalifa Haftar, conditioned the transfer of power to the new executive authority on the approval of the Tobruk-based parliament.

Asked about the statement, Dbeibeh said, “Our government must win parliamentary approval from the Tobruk-based parliament.”

“Al-Thani announced that he would wait for the approval of the new government and this is logical,” he said. “I think the [Tobruk-based] parliament has welcomed the results of Libya’s political dialogue.”

Dbeibeh continued, “The choice is up to the Libyan people and the people have welcomed this government. I believe [the Tobruk-based Parliament] is part of the people and I don’t think they will opt for any other option.”

Libya has been wracked by civil war since the deposition of ruler Muammar Gaddafi in 2011.

Based at the capital Tripoli and currently led by Prime Minister Fayez al-Sarraj, the National Accord Government was founded in 2015 under an UN-led agreement. However, long-term political settlement efforts have failed due to a military offensive by Haftar’s militias.

Al-Sarraj’s internationally recognized government has been battling Haftar’s forces since April 2019 in a conflict that has claimed thousands of lives.

As for Libya’s relations with Turkey, Dbeibeh said there is solidarity between the two countries.

“We maintain great solidarity with the Turkish state and people,” he told Anadolu Agency.

“Turkey is an ally, friend, and a brotherly state, and it has huge capabilities to help the Libyans achieve their real goals. Turkey is considered a real partner to Libya,” he stressed.

Asked about trade relations between Libya and Turkey, Dbeibeh said Ankara had proved itself, not only in Libya but in the whole world.

“Turkey was the only country that the Libyans could freely travel to during the war,” he said. “Turkey has kept its airports open to the Libyans and did not close its embassy in Tripoli.”

Dbeibeh continued, “I believe that the freedom of movement will reflect positively on economic cooperation between the Libyan and Turkish peoples. We hope to bolster this cooperation and enhance our trade exchange to the highest level.”

As for bringing perpetrators of war crimes in Libya to justice, Dbeibeh said: “Justice will take its course.”

“But we are now in a difficult phase of establishing peace in Libya and both sides must make concessions and come to one point to achieve Libyan interests,” he said.

“We want real reconciliation between all Libyan parties and whoever proves guilty will face justice,” the new Libyan premier said.

Born in 1958 in Misrata in northwestern Libya, Dbeibeh has been known as an influential businessman in the construction field. He is an independent person who is accepted among Libyan political circles.

After the Libyan revolution that ousted Muammar Gaddafi’s regime in February 2011, he headed the oldest Libyan football club, Al-Ittihad Club.

Dbeibeh founded Libya al-Mustakbal (Libya Future) Movement and enjoyed the support of western tribes. He holds a master’s degree in engineering from Canada.