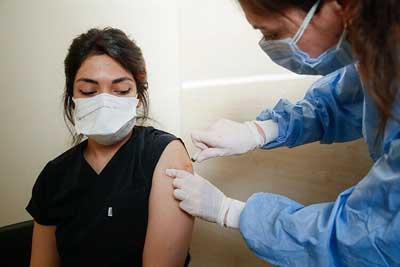 Turkey is preparing to administer the second dose of the COVID-19 vaccine to its health care workers next week as local laboratories will complete the analysis of the Chinese company Sinovac’s jabs the country received in late January.

Turkey launched its vaccination drive on Jan. 14 starting with frontline health care professionals. To date, more than 2.6 million people, mostly health staff and the elderly, have received their first dose of the injection.

The country has been vaccinating on average around 100,000 people per day.

The inoculation program was rolled out after a 14-day analysis of the 3 million doses of the injections brought from China on Dec. 30, 2020, was completed.

The authorities immediately started running tests on the vaccines upon their delivery of the last batches. Thus, the local laboratories are expected to finish those tests sometime next week and the vaccines will be ready for use.

Turkey signed a deal with Sinovac to buy 50 million doses of the firm’s CoronaVac injection to vaccinate 25 million people.

In the second stage, essential workers and those aged between 50 and 64 will get the shot.

The third stage includes those with at least one chronic disease aged below 50 and young adults.

In the fourth stage, the rest of the population will be vaccinated.

Health care workers are set to receive their second dose at a time when authorities announced that the South African, Brazilian and the U.K. variants of the coronavirus have already been detected in more than 20 provinces of the country.

Some experts suggested that a recent surge in the number of daily infections could be related to the virus variants and also that people may be now ignoring the virus-related precautions, such as wearing face masks, hygiene and social distancing, after the vaccinations started, which probably leads to a more complacent behavior among the public.

The daily number of infections has been hovering at around 8,000 since the start of January.

Cuomo says he was ‘being playful,’ but admits he ‘may have been insensitive’ amid sexual harassment claims