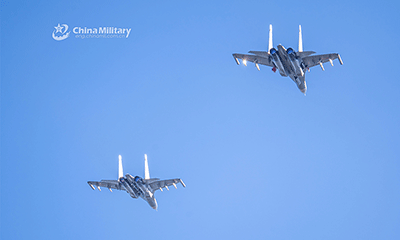 Chinese President Xi Jinping called for the Chinese military to enhance its combat readiness during the upcoming Spring Festival holidays when he recently inspected an aviation division of the People’s Liberation Army (PLA) Air Force. Experts said other militaries should not have the illusion that they can make provocative moves during the holidays without meeting PLA’s countermeasures.

PLA warplanes continued their consecutive exercises near the island of Taiwan prior to the Spring Festival, and the high-altitude border defense troops of the Xinjiang Military Command received several new weapons and equipment including advanced howitzers and assault vehicles as “holiday gifts,” media reports said.

Xi, also general secretary of the Communist Party of China Central Committee and chairman of the Central Military Commission, on Thursday inspected an aviation division of the PLA Air Force being stationed in Southwest China’s Guizhou Province ahead of the Spring Festival, or the Chinese Lunar New Year, the Xinhua News Agency reported on Saturday.

He said that PLA troops should enhance their combat readiness during the Spring Festival holidays and safeguard national security as well as the happiness and peace of the people.

This year’s Spring Festival falls on Friday, and there is a seven-day national holiday from Thursday to February 17.

“History tells us that many wars broke out on holidays or at night when troops let their guard down. That is why we need to stay on high alert particularly when there are holidays, so we can stop any potentially dangerous moves or hostile reconnaissance,” Fu said.

While China has witnessed peace for a long time, provocative moves by other militaries had occurred during holidays in the past.

For instance, on January 25, 2020, the Spring Festival of last year, the US Navy sent the USS Montgomery littoral combat ship near the Nansha Islands in the South China Sea, and was tracked, identified and warned away by naval and aerial forces of the PLA Southern Theater Command, the command’s spokesperson said at that time.

During his inspection at the PLA Air Force aviation division, Xi inspected a special aircraft designed for information warfare.

Special mission aircraft developed on the basis of Y-8 and Y-9, including reconnaissance aircraft, electronic countermeasures aircraft and anti-submarine warfare aircraft, can enable the PLA to gain informational advantage in future warfare, a military expert who asked not to be identified told the Global Times on Sunday. The expert noted that these types of aircraft have been frequent visitors near the Taiwan Straits since the start of PLA military exercises in the region in September 2020, which have become routine.

An artillery regiment attached to the PLA Xinjiang Military Command based in the northern foot of the Tianshan Mountains recently received delivery of a batch of the 155mm-caliber vehicle-mounted howitzers, CCTV reported on Saturday. The howitzer, designated as the PCL-181, is China’s most advanced of its kind with longest range, and characterized by its high mobility, fast reaction time, high accuracy and capability to shoot at 360 degrees, even when operating in plateaus and harsh cold, analysts said.

These weapons and equipment are particularly effective in plateau operations and will serve as a solid boost to the Chinese border defense troops’ combat capabilities during and after the Spring Festival festivals, analysts said.