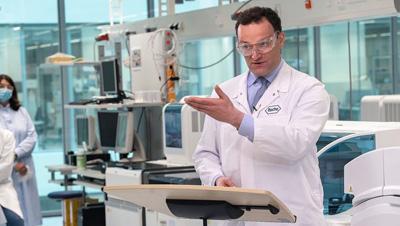 It only took pharmaceuticals producer BioNTech a few months to set up a new vaccine factory in Germany. Berlin should use the case as an example in efforts to boost production of the medicines urgently needed to stop the COVID-19 pandemic.

Hope is arising between an environmentalist center and the mausoleum of German Nobel Prize laureate Emil von Behring. It can be found in handful of factory halls and administrative buildings on the outskirts of the German city of Marburg. Some of them are more than 100 years old, from the time when the factory was used to manufacture the first medicines used to treat tetanus. Now, the German biotech firm BioNTech is converting the site for the production of its COVID-19 vaccine. Beginning in March, the plant is expected to produce around 70 million doses a week.

The plant was built in the record time of just a few months. Whenever the debate crops up these days about how and when Germany is finally going to get more vaccine supplies, the discussion always leads to the plant in Marburg. It could become a blueprint, a model for the future. In theory, at least. In practice, Europe lacks production capacity to manufacture sufficient vaccine – and not just for the next few months, but also for the second half of the year and for the years to come. This is becoming clearer with each passing week. Marburg will do little to change that.

For months, the government in Berlin has stubbornly stuck to its claim that Germany has already ordered enough vaccine. It may take a little longer to vaccinate everyone, Chancellor Angela Merkel explained last week, but the first vaccination should be available to everyone by the end of September. Deliveries of 323 million doses of COVID-19 vaccines are expected for Germany by the end of the year. Probably.

But the past few weeks have shown that the probability is high that there will be repeated setbacks in vaccine acquisition and administration. Supply problems can suddenly lead to shortfalls of millions of doses. Meanwhile, mutated variants of the coronavirus are spreading faster and faster and could even make a third dose necessary. Or even an entirely new vaccine at some point.

Leading economists are therefore calling for expanded production capacities, spurred by the state. They argue that billions need to be invested in additional factories so that Germany can at least be safe from the pandemic by the end of the year. This would mean placing yet another burden on the already strained national budget. On the other hand, each month of the pandemic results in costs of 420 billion euros to the global economy.

This has led Markus Söder, a conservative politician and the powerful governor of Bavaria, and the Robert Habeck, the co-head of the Green Party, to unanimously call for a government intervention that would lead to additional pharmaceutical production by decree. Even European Commission President Ursula von der Leyen, who has come under fire for the EU’s procurement debacle, is proposing the repurposing of existing production facilities with money from the EU budget.

But would it really be good for the government to directly intervene? German Health Minister Jens Spahn would prefer to have companies themselves provide the necessary supplies.

Economists, however, don’t think it will be possible without the government stepping in and playing a role. They argue that the government needs to provide manufacturers with incentives, drive and direct assistance – a carrot and stick approach.

“Building up production capacity is extremely expensive,” says Marcel Fratzscher, president of the German Institute for Economic Research. Companies don’t just take those kinds of risks, especially if they are listed on the stock exchange.

If the first half of the year can no longer be saved, Fratzscher argues, then the state needs to act now to help make up for lost progress in vaccinations. “In this case, it’s delusional to think that the market can fix the situation on its own.”

But opinions differ over how the government can best help. Clemens Fuest, the president of the Ifo Institute, a renowned economic think tank in Munich, suggests incentivizing pharmaceuticals with hefty bonuses. “A dose delivered three months early could well be worth hundreds of euros to society.”

Moritz Schularick, a professor of economics at the University of Bonn, believes we have reached a point “where financial incentives alone are no longer sufficient – that production must be organized as an emergency, a quasi-wartime economy.” In other words, the government needs to force companies to act.

But how quickly can production be ramped up in Germany? “You could get a lot done in three months. In six months, you would almost certainly have more production capacity,” says Gerhard Winter, a professor of pharmaceutical technology at the University of Munich.

He believes it makes sense to accelerate the production of mRNA vaccines in particular. That would take less time that setting up vector vaccine factories like those needed by AstraZeneca. Such factories require bioreactors, which take very long to build.

The production of mRNA vaccines is also complex, but it is easier to accelerate the process, which happens in three steps. First, the mRNA has to be produced. This is currently happening at the German bio-pharmaceutical companies BioNTech and CureVac, whose mRNA vaccine is still in the testing phase. Pharmaceutical expert Winter says that if they aren’t able to produce sufficient capacities, they could also contract others to expand capacities. “You don’t need gigantic buildings for this, smaller manufacturing plants can do the job as well.”

There is currently no shortage of mRNA – there are stockpiles of it. However, there is a lack of a sufficient amount of two synthetic modules that are required for the further processing of mRNA. In the second step, these synthetic modules have to be encapsulated in nanoparticles containing fat. They are currently being imported the United States.

In the final step, the vaccine has to be filled aseptically. The biggest challenge here is that highly trained staff are required to do the job. If a single vaccine dose is exposed to germs, the entire factory might have to be shut down for a thorough cleaning.

Small specialists, like the Austrian family-owned company Polymun, are under particular pressure. The company fuses mRNA with nanoparticles. About 16 employees working in several clean rooms handle the liposome production for four different mRNA vaccine projects. At the end of the process, sterile disposable containers with a total of about 80 liters of mRNA packed in lipid nanoparticles leave the factory. One delivery is enough for just under one million doses and is taken to the Pfizer plant in Puurs, Belgium, by small truck.

“The complexity is in having to ramp everything up simultaneously,” says Polymun CEO Dietmar Katinger. “It’s lipids that are lacking at the moment. Tomorrow it could be something else.”

At worst, mRNA may have to be discarded because there aren’t enough lipids arriving or there is a shortage of the bags used to ship them.

If the active ingredient can be delivered, there is no shortage of companies that can fill the dose vials. Novartis has said it would like to manufacture for BioNTech. French pharmaceuticals giant Sanofi, which has suffered massive setbacks in the development of its own vaccine, has also said it would produce for the German company.

But offers for help on the production of the raw materials aren’t quite as plentiful. Nevertheless, at some point this year Novartis is planning to start producing mRNA. CureVac has joined forces with German pharmaceutical company Bayer. It will take until the end of the year to convert a plant suitable for the job in Wuppertal, Germany.

This also underscores the fundamental problem with COVID-19 vaccine production: Pharmaceutical giants themselves can’t simply flip a switch and go from the production of cancer drugs to vaccines, even at plants that are technically suitable. Nonetheless, the German government currently prefers to leave it largely up to manufacturers to ramp up capacity. At most, it has expressed a willingness to help with syringes for administering vaccine or chemical products.

Moving forward the Economics and Health Ministries in Berlin would prefer to provide purchase guarantees with a term of four or five years with the companies. Their hope is that the investment in new production facilities could pay off for the companies in that amount of time.