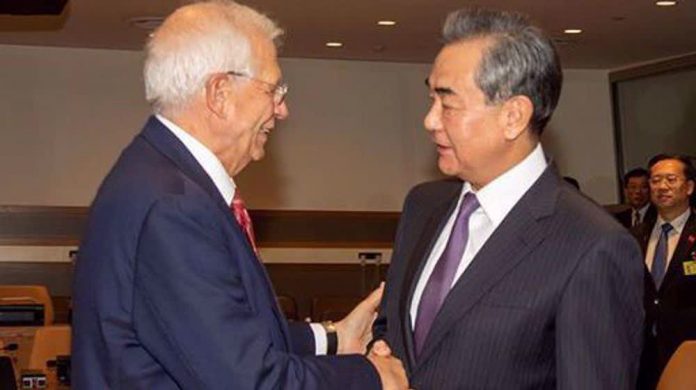 In a videoconference call on Monday, the European High Representative praised China’s “positive role” in preserving the 2015 nuclear deal between Tehran and world powers, officially known as the Joint Comprehensive Plan of Action (JCPOA), including on the implementation of the Arak Modernization Project.

The High Representative referred to Iran’s recent measures to expand its nuclear program beyond the limits of the JCPOA, and underlined the “urgency of pursuing diplomatic efforts to ensure full JCPOA implementation by all sides” in line with the Ministerial meeting of JCPOA participants on 21 December 2020.

The two sides stressed that there was scope for the EU, China and the US to join forces in dealing with key global challenges such as the Iran nuclear issue, among others.

The Monday talks were held a few days after the Iranian foreign minister said Josep Borrell can resolve the current standoff between Iran and the US in his capacity as the JCPOA coordinator.

Mohammad Javad Zarif made the remarks in an interview with CNN last Monday, when he was asked about the possible solution to ending a “Mexican standoff” between Tehran and Washington over the two sides’ return to compliance with the JCPOA, in which each of them says the other one must first deliver on its commitments.

“Clearly there can be a mechanism to basically either synchronize [Iran and US moves] or coordinate what can be done. The JCPOA has a built-in mechanism, which is the joint commission. The joint commission has a coordinator … who can sort of choreograph the actions needed to be taken by Iran and the US,” Zarif said.

A spokesman for Borrell said last Tuesday that the EU is pressing the Biden administration to lift the sanctions.

Borrell is “working extremely hard to get the JCPOA back on the rails,” said the spokesman, Peter Stano.

“We’re talking to the American administration to see if those sanctions could be lifted, to see if we can have full implementation of the JCPOA,” Stano added.

China had earlier called for an “unconditional” US return to the 2015 Iran nuclear agreement and removal of the sanctions it restored against the Islamic Republic after unilaterally abandoning the UN-endorsed agreement.

“The Iranian nuclear issue is at a crucial juncture. The imperative at the moment is for all parties to accelerate implementation of the consensus reached at last December’s foreign ministers’ meeting, push for the unconditional return of the United States to the JCPOA as early as possible, resume compliance and the lifting of all relevant sanctions,” Chinese Foreign Ministry spokesman Wang Wenbin said during a press conference last Tuesday.

Wang said Iran should also return to full compliance with the JCPOA, adding that China is following the situation closely and maintaining close communication with all relevant sides.

“We support a step-by-step and reciprocal approach and will continue to work with relevant parties and the international community to bring the JCPOA back on track and promote the political settlement of the Iranian nuclear issue,” he remarked.

US to work on ‘stronger deal’ after returning to JCPOA: Blinken

Meanwhile, US Secretary of State Antony Blinken says the US will only return to its commitments once Iran returns to compliance.

Speaking in a Monday evening interview with CNN, Blinken said the US will work with its allies to try to come up with a “longer, stronger agreement.”

He also expressed concern that Iran is closer than it has ever been to having the capacity to produce the raw material for a nuclear weapon.

Washington’s call for a “longer and stronger” agreement with Iran encompassing other issues irrelevant to Tehran’s nuclear program, including Iran’s national defense program and influential regional role, comes as Iran has, on numerous occasions, strongly rejected the idea of negotiations about other issues or a renegotiation of the JCPOA.

The United States is weighing a wide array of ideas on how to revive the Iranian nuclear deal, including an option where both sides would take small steps short of full compliance to buy time, said three sources familiar with the matter.

This option could entail Washington allowing Tehran to get economic benefits less valuable than the sanctions relief it received under the 2015 deal in return for Iran stopping, or perhaps reversing, its own breaches of the agreement, Reuters reports.

The sources stressed US President Joe Biden has yet to decide his policy. His stated position remains that Iran resume full compliance with the pact before the United States will.

“(They) are having a real think,” said one source familiar with the US review, saying ideas under consideration include a straight return to the 2015 nuclear deal and what he called “less for less” as an interim step.

Another source said if the Biden administration concluded it would take too long to negotiate a full return to the deal, it could adopt a more modest approach.

“Should (they) at least try to give Iran some sanctions relief and get Iran to agree to pause and maybe roll back some of its nuclear (steps)?” said this source.

Former US President Donald Trump unilaterally withdrew America from Iran’s nuclear deal in 2018. Under the deal, Tehran had agreed to limit its uranium enrichment in exchange for the lifting of economic sanctions.

After the US then ramped up sanctions, Iran gradually and publicly abandoned the deal’s limits on its nuclear development.

New President Joe Biden, who was vice president when the deal was signed during the Obama administration, has said he hopes to return the US to the deal. But new US Secretary of State Antony Blinken says the US will only return to the nuclear deal once Tehran honors its nuclear commitments.