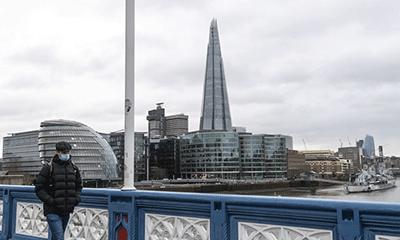 A man wearing a face mask walks along the Tower Bridge in London, Britain, on January 5. Photo: Xinhua

The UK House of Commons has planned to vote Tuesday on an amendment to its Trade Bill, of which one revised clause is designed to prohibit UK trade with countries that “commit acts of genocide.”

The clause was proposed by David Alton, a die-hard China hawk, who has repeatedly accused China of committing “genocidal act” in Xinjiang Uygur Autonomous Region without displaying any evidence, which is a horrendous fabrication and insidious attack on China and 1.4 billion Chinese people.

Definitely, there is no genocide happening in China! China’s Foreign Ministry has repeatedly refuted some US and Western liars for badmouthing and demonizing China.

“Xinjiang has never been more prosperous than it is now, with unprecedented achievements in socio-economic development and marked improvement of people’s livelihood,” ministry spokesperson Zhao Lijian said at a press conference on January 28.

The so-called “genocide” accusation is nothing but a venomous lie concocted by anti-China forces to smear the rapidly developing giant country. So, there is no reason and logic to link China to the UK’s Trade Bill amendment.

However, it is natural that there is market concern regarding a possible sweeping freeze of China-UK political and diplomatic relations, and the subsequent negative impact on the two countries’ economic ties.

Ironically, it was not long ago that London and Beijing were constructive, friendly partners, basking in a “golden era” of bilateral relations. No one would have expected their good relations would veer off the track so quickly and dramatically.

It is disturbing for the international market and business circles to see the souring China-UK relations, which, to some extent, may undermine London’s efforts to restructure its trade network in a post-Brexit era.

From economic perspective, the UK has the need to join more multilateral free trade institutions and frameworks after exiting the EU bloc. Brexit and the COVID-19 pandemic have greatly weakened the country’s economic standing among the world’s major economies.

Winning access to a number of free trade pacts could bring new trade possibilities for the increasingly isolated Atlantic country, which will act as a psychological inspiration for the people, who are disgruntled by the big loose mouth politicians in London, and are increasingly bewildered about the country’s future.

China, relying on its rapidly surging economy, has played an active role in organizing and participating in free trade agreements, such as the 15-member Regional Comprehensive Economic Partnership, the world’s largest free trade zone.

Barring worsening bilateral relations, the possibility for China and the UK to discuss trade integration, under either multilateral mechanism or bilateral mechanism, is there. Yet, it is important to note that market perceptions about the souring China-UK relations may become a source of uncertainty to inhibit London’s pursuit of a trade rearrangement plan.

If UK politicians are determined to wreck the country’s relations with China, continue to demonize and assault China, Chinese people will be forced to teach them a lesson and retaliate against UK.