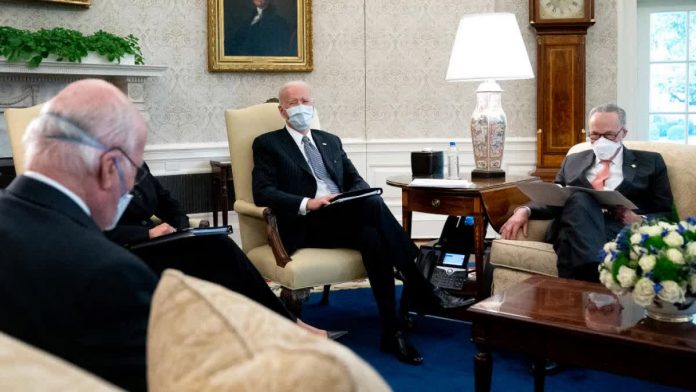 President Joe Biden prefers to hold meetings in the Oval Office sitting in an armchair next to the fireplace. He often has a slim leather briefing book at his elbow and sometimes balances a slender card on his knee while he’s talking, to reference figures and key points he wants to make.

It’s quite a contrast to the previous four years, when former President Donald Trump held court in the room from behind the oak timbers of the Resolute Desk, shooting off unpredictable, unscripted comments and belittling rivals as the cameras rolled. The desk was often bare, save a secure telephone and a red button he could press to order a Diet Coke. (“Do you want something to drink, folks?” Trump asked TIME reporters when he pushed the button on his desk during an Oval Office interview in June 2019. A drink arrived, but just for him.) In the waning weeks of Trump’s presidency, the room became a clearinghouse for fake conspiracies and lies that massive voter fraud cost Trump the election. (It didn’t.)

Now Trump’s soda button is gone, and more than two weeks into his presidency, Biden has brought an abrupt shift in tone to the oblong room that Trump used as a soapbox to advance his personal political power. At one end of the National Mall, Senators prepare to consider the charge that Trump incited an insurrection in the former President’s second impeachment trial, a little over a month after a violent mob stormed the Capitol. Near the other, at 1600 Pennsylvania, Biden is going about tough, quiet business of running a country. The sudden change of atmosphere signals that America may be moving past its crisis of democracy, but the other crises the country faces — the pandemic, the economy, structural racism and the changing climate — present daunting tasks for Biden.

“He’s lowered the toxic tone of Washington coming from the Oval Office at least, and that’s what people were looking for,” says Princeton historian Julian Zelizer. Trump used the Oval Office as a site to “launch toxic rhetoric and attack people,” Zelizer says, where as Biden is “using it as a site of governing.”

Biden’s careful approach to his first two weeks on the job comes as a jarring, grinding downshift. And it’s not necessarily one that long-time Biden watchers may have predicted. Earlier in his career, Biden earned a reputation as an affable, glad-handing gaffe machine, who often revealed what he was thinking even when that wasn’t the most politic move. But Biden brought a new discipline to the 2020 campaign trail — much of it forced by the strict pandemic precautions he took — that has carried into his presidency. He’s made few unscripted public comments. He hasn’t given a press conference. He’s decided not to wade into the churning news cycle around stripping Rep. Marjorie Taylor Greene of her committee assignments for promoting conspiracy theories, and he hasn’t used his stump to weigh in on Trump’s upcoming impeachment trial.

Instead, he’s played ringmaster to the troop of Democratic policy wonks he’s set loose to undo Trump’s attempted demolition of the regulatory state, hardline immigration policies, and polluter friendly policy moves, as well as rev up the bureaucracy to tackle the nation’s raft of crises. “There’s a lot of talk with good reason about the number of executive orders that I’ve signed,” Biden said Feb. 2 as he put his long “J” and curving “B” on immigration orders, including one that set up a task force to reunite families separated by the Trump Administration after crossing the border illegally. “I’m not making new law. I’m eliminating bad policy,” he said. As of Friday, Biden had signed 29 executive orders, nearly reaching the record for such actions set by Franklin Roosevelt during his first month in office.

Many of those orders launched the frankly boring task of collecting data and reviewing where the country stands after years of inattention from Trump, just to get to the point where informed decisions can be made. One task force will inventory all of the government assets in the fight against the COVID-19 virus. Biden’s put the U.S. back in to the Paris climate agreement and reversed Trump’s ban on travelers from several majority-Muslim countries. When it comes to rejoining the Iran nuclear deal Trump left, Biden has asked his foreign policy team to consider the options. “He’s setting up task forces and asking for analysis and plans,” says Timothy Naftali, a historian and New York University. “That is what serious presidents have done; they make it clear where they want to go but then acknowledge it takes time to turn around the executive branch.”

Where Biden’s not taking his time is on the pandemic and the economic recession. He’s urged Congress to act quickly to take up his $1.9 trillion plan to fund measures to get the COVID-19 pandemic under control and push funds into the sputtering economy. His team is working with Democratic lawmakers on pushing the funding through with no Republican votes, if necessary.

Biden ran on a promise to reach across the aisle, and has told aides and Senators from both parties he wants Republicans involved, if they’re willing. But he’s also made clear he won’t wait for Republicans to draw out negotiations for months, and his criticism of the GOP has gotten sharper in recent days. “If I have to choose between getting help right now to Americans who are hurting so badly and getting bogged down in a lengthy negotiation or compromising on a bill that’s — that’s up to the crisis, that’s an easy choice,” Biden said Friday at the White House. “I’m going to help the American people who are hurting now.”

Later the same day, Biden trained a more pointed critique at Republicans who think his $1.9 trillion plan is too expensive. “What Republicans have proposed is either to do nothing or not enough. All of a sudden, many of them have rediscovered fiscal restraint and the concern for the deficits. But don’t kid yourself: This approach will come with a cost. More pain, for more people, for longer than it has to be,” Biden said.

These are comments coming from a President who knows that polling so far shows his push for more pandemic relief has broad public support. His big ticket stimulus proposal has 68% support among Americans, according to a Quinnipiac University national poll released Feb. 3. At the moment, 56% of Americans think Biden is doing more to unite the country than divide it, the same poll found.

But Biden is entering a potentially divisive week. Trump’s impeachment trial in the Senate will bring the former President’s combative style back into the headlines, and lawmakers will have to start hammering out the details of how to pass the massive relief package. Biden already raised hackles on the left when he told CBS News on Friday he doesn’t think his proposal for a $15 federal minimum wage would survive the negotiations, signaling he may not vigorously defend that part of the deal. Those negotiations, and the coming reckoning for Trump, will test just how long Biden can manage to stay above the fray.

— With reporting by Alana Abramson/Washington