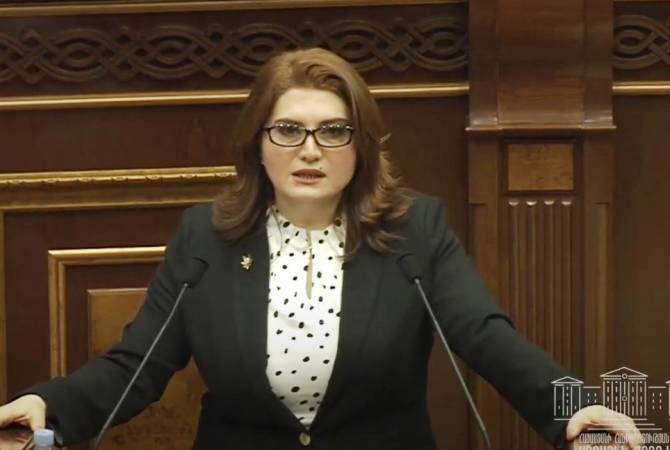 Lilit Tadevosyan  was born in 1978, in Yerevan.

1993 – Graduated from the Russian secondary school # 182 in Yerevan with a gold medal in the same year entered and graduated with honors in 1998 from the Law Faculty of Yerevan State University.

05.2006 – 11.2007 – Prosecutor of the Criminal Investigation Department of the RA Prosecutor General’s Office.

11.2007 -10.2011 – Prosecutor of the Department for Corruption and Organized Crimes of the General Prosecutor’s Office of the Republic of Armenia.

She was a member of the Scientific-Methodical Council of the RA General Prosecutor’s Office.

09.2000 – 09.2011 – lecturer at Yerevan State University Law Faculty, and since 2010 up to now, at the Law Faculty of the Armenian-Russian (Slavonic) University. She has also lectured at the “Prosecutor’s Office School” SNCO.

2006 – 2010 was a doctoral student of the Moscow State University of the Ministry of Internal Affairs of the Russian Federation.

2010 – doctoral thesis. The Scientific Council of the same University and awarded her the degree of Doctor of Law from the Higher Qualification Commission of the Russian Federation.

The diploma of the candidate of juridical sciences has been certified by the Federal Service for Supervision of Education and Science of the Russian Federation, and the Diploma of Doctor of Law is certified by the Higher Qualification Committee of the Republic of Armenia.

She has participated in many international conferences (Republic of Armenia, Russian Federation, Arab Republic of Egypt, Georgia) and received certificates.

Author of over 60 scientific works published in the Republic of Armenia and the Russian Federation, including 5 monographs.

On 30 June, 2012 by the decree of the RA President she was appointed judge of the RA Criminal Court of Appeals.

By the Decree of the President of the Republic of Armenia on 22 September, 2016 she was appointed Judge of the Criminal Chamber of the Court of Cassation.

At the Recommendation provided by the SJC Decision-25-N -54 and the Presidential Decree of 20 July, 2016, she was appointed Chairperson of the Criminal Chamber of the Court of Cassation for a six-year term.