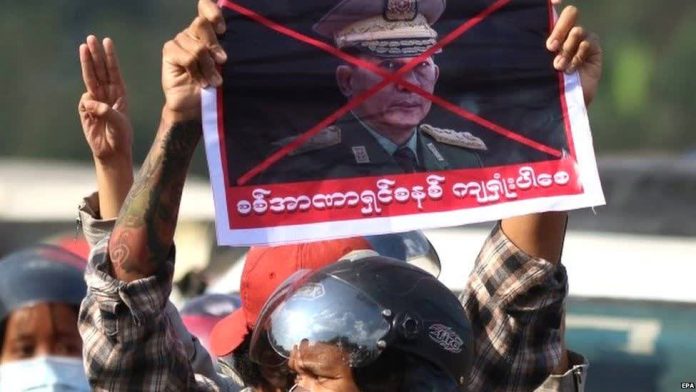 The leader of the coup in Myanmar has made his first TV address, seeking to justify the action amid mass protests.

The military has begun to impose restrictions in some areas, including curfews and limits to gatherings.

Huge protests were held on Monday for a third straight day, along with a nationwide strike, to oppose the coup.

One demonstrating doctor – who did not want to be named – told the BBC: “Today, we, professionals – especially civil servant professionals such as doctors, engineers and teachers – came out to show that we are all together in this. Our objective is the same – to make the dictatorship fall.”

The military seized power last week and declared a year-long state of emergency in Myanmar, also known as Burma, with power handed over to Gen Min Aung Hlaing.

Ms Suu Kyi and senior leaders of her National League for Democracy Party (NLD), including President Win Myint, have been put under house arrest.

The US state department said on Monday it had tried to meet Ms Suu Kyi but its requests had been rejected. The US said it stood by the people of Myanmar in their right to assemble and protest peacefully.

An Australian economic adviser to Ms Suu Kyi, Sean Turnell, has also been detained and on Monday his family posted a statement on Facebook calling for his immediate release.

What did the general say?

Gen Min Aung Hlaing’s speech focused more on the reasons for the coup and less on threats to protesters.

He said the electoral commission had failed to investigate irregularities over voter lists in the November election and had not allowed fair campaigning.

The commission had said there was no evidence to support claims of widespread fraud.

He also said his rule would be “different” from what was effectively a 49-year military grip on power that ended in 2011 and which saw brutal crackdowns in 1988 and 2007.

He spoke of achieving a “true and disciplined democracy”, a phrase that drew scorn from some opponents of the coup on social media.

He also told citizens to “go with the true facts and not to follow feelings of your own”.

The general did not issue direct threats to protesters, saying only that no-one was above the law.

But some areas have seen clampdowns, with parts of Yangon and second city Mandalay, along with other areas, under a 20:00 to 04:00 curfew and with gatherings limited to groups of five or less.

Earlier, a broadcast on state TV warned “action must be taken, according to the law… against offences that disturb, prevent and destroy state stability, public safety and the rule of law”.

Phil Robertson, the deputy Asia director of Human Rights Watch, said: “For a military coup government that has trampled all over democracy and the rule of law, it’s absurd for them to claim they have any right to ‘legal action’ against peaceful protesters.”

Who has been on the streets?

Tens of thousands gathered on Monday in the capital, Nay Pyi Taw, for the strike, with other cities such as Mandalay and Yangon also reporting significant numbers, according to BBC Burmese. The protesters include teachers, lawyers, bank officers and government workers.

Online there had been calls asking workers to skip work to protest. “This is a work day, but we aren’t going to work even if our salary will be cut,” one protester, 28-year-old garment factory worker, Hnin Thazin, told news agency AFP.

Another protester, Hnin Hayman Soe, told the BBC she had joined the protest alongside her children, nieces and nephews. “We can see many young people can’t accept the military junta. We can even see teenagers here,” she said.

A few injuries have been reported, but no violence. However, a water cannon was activated in Nay Pyi Taw to disperse crowds. A video appears to show protesters rubbing their eyes and helping one another after being soaked.

Kyaw Zeyar Oo, who took the video, told the BBC two vehicles had sprayed protesters with “no prior warning”, while “the crowd was peacefully protesting in front of [the police]”.

The BBC’s Nyein Chan Aye, in Yangon, says Buddhist monks, members of the minority Muslim community, top footballers and film and music stars have all been joining the anti-coup protests, which he says are expected to become more organised in the coming days.

Is there evidence of election fraud?

Gen Min Aung Hlaing has referred to discrepancies in the voter rolls as justification for the coup.

The Myanmar army says it has uncovered more than 10 million examples of irregularities on the voter lists, including duplicate entries or individuals registered without national identification numbers.

But the country’s election commission has rejected the claims.

Independent observers acknowledge there may have been mistakes on the lists, but claims of deliberate fraud have not been supported by evidence.

The US-based Carter Center, which had more than 40 observers visiting polling stations on election day, said voting had taken place “without major irregularities being reported”.

There were safeguards to stop people voting twice, such as indelible ink on fingers. The election commission also pointed to strict Covid restrictions preventing travel, making it extremely hard to vote in multiple locations.

Omens not too good

The earlier warning broadcast on state television that action would be taken against wrongdoers was the first shot across the bows from the military junta.

In the last outbreak of anti-military protests in 2007, the official warning was given just two days before the soldiers moved in, opening fire with live rounds and killing dozens.

That was a different era, with no social media, no mobile phones and little internet. This time the protests are being live-streamed on Facebook, despite an official order to local telecom companies to block it and other popular apps.

Is the military ready to incur even greater unpopularity and use lethal firepower again to enforce its will?

The omens are not good. The generals who seized power appear to believe they acted correctly in deposing Aung San Suu Kyi, even warning today that it is the protesters who are threatening democracy with their “lack of discipline”, and not the army with its coup.